Today, following a funeral at which I served as the organist, I went out to lunch at a restaurant I have only visited once before. Armed with a gift certificate from Restaurant-dot-com, I went to the Laganini restaurant on Gravois Road in the extreme southern part of St. Louis City, about two blocks east of the Bevo Mill.

Those who know this neighborhood are aware of its strongly Balkan ethnic flavor. Within a few blocks of Laganini are a Bosnian newspaper, the excellent Grbic restaurant, several shops and pubs whose names suffer from an acute shortage of vowels, and--literally across the parking lot from Laganini itself--the

not-so-excellent Bosnia Gold restaurant, which judging by the parking lot does a lot more business than Laganini. This is a terrible injustice that I would like to help set right.

Don't let the Italianate name fool you. Laganini is also a Bosnian restaurant. The waiter/bartender on duty at lunch today is avowedly Bosnian. He also appears to be the owner (as I noticed on my way out of the place, when I spotted his picture in a framed newspaper article near the door). When asked, he readily pointed out other people of Bosnian nationality present in the bar, which was a good trick because there weren't a lot of people there at the time.

Though one side of the two-sided, laminated lunch menu is all pizza and some of the other dishes (such as my main course today) are of Italian origin, Laganini also caters to the tastes of those who come from various former Yugoslavian republics. The bar stocks a beer imported from Slovenia (I had two bottles of this Laško brew, and it wasn't bad as lager goes). Songs crooned by the Croatian equivalent of Neil Diamond play in the background while you admire the very tasteful and stylish interior decor. The kitchen produces a very passable, if slightly burnt, spanakopita (an appetizer in which spinach is cooked inside a triangular pocket of flaky phyllo dough). Phyllo dough also plays a charming role in the warm "applepita" that I ordered for dessert, as it were an Adriaticized apple cobbler with a dollop of ice cream and Cool Whip on top, and that adds the perfect counterpoint of tart sweetness to the bitter double shot of espresso that I took with it.

In between these flaky delights, I enjoyed a nice salad of finely ripped lettuce, tomato, onion, and pepper topped with Italian dressing and crumbled feta cheese, and then my first-ever plate of veal piccata, served with a side of rigatoni in herbs, parmesan cheese, and olive oil. Heretofore veal has not been a major part of my diet. I'm not even sure that the handful of Wienerschnitzels I have eaten were really, at bottom, veal. But this restaurant has three veal dishes on its lunch menu, each for the temptingly reasonable price of $14 (which includes the salad, the side, and a basket of soft warm bread that really tastes nice when you dunk it in the sauce from the veal). After today's lunch I'm starting to see a more regular enjoyment of veal on the horizon.

I think the three veal dishes at Laganini are Wienerschnitzel (veal flattened with a tenderizer, then breaded, pan-fried and dressed with a brown sauce), veal parmesan (ditto up to the pan-fried part, then topped with marinara sauce and melted cheese), and today's winning candidate, veal piccata. Like the other two dishes, you can also enjoy this type of thing with chicken instead of veal, but the difference must be like night and day. This veal was tender, juicy, and full of its own distinctive flavor. Its savory sauce, which I take to be a concoction of olive oil, lemon juice, and maybe a touch of wine, is seasoned with garlic, herbs, and lots of plump capers ready to burst in your mouth. I've never had anything like it until now; so I feel a sense of loss for all the years I could have been enjoying this dish. 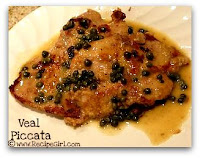 I could have had mixed vegetables or a roast potato on the side, but I went with the pasta. Wiki informs me that this starchy side-dish is a departure from the custom of Italy, where the dish originated, but it is absolutely in character for countries out of the former Austro-Hungarian Empire. This is the grounds on which I rank Laganini a bit lower than Grbic, but significantly above Bosnia Gold, in the quality of their food. Grbic cares enough about even the least important detail of your meal--that starchy side-dish--to serve you a mess of wonky little homemade egg-noodles in a garlicky butter sauce; Bosnia Gold cares so little that they give you elbow macaroni, and not particularly well-cooked elbow macaroni at that. Laganini's entry in this bellwether category is cooked just right, palatably seasoned, lubricated but not drowned in a light sauce, and really quite unnecessary when you realize that you have a basketful of fresh-baked bread to dip in the even better-tasting sauce running off the meat.

Everything was marvelous. I am loath to complain even about the spanakopita being slightly burnt on one side; they were tasty in spite of the charring. Bottom line: You St. Louis-based readers need to help me do something about the empty parking lot at Laganini. It's a crying shame, especially when a decidedly inferior restaurant is doing swell business next door. If you're hesitant to try it out at full price, look it up here and bring a gift certificate with you. Remember not to be surprised to find out that it's not an Italian place--except insofar as Croatia's elbow comes Gulf-of-Trieste close to poking Italy's bottom, so there might be a bit of cultural overlap there. If you want some of the best Italian food in the south-city, there are many other places to discuss. But if you're open to trying a creditable Austro-Hungarian sally at a classic Italian dish--which you probably can't afford to eat at a real Italian place--this may be your best buy.
Posted by RobbieFish at 1:47 PM