Around St. Louis there is a chain of restaurants called Lion's Choice, which most directly competes with Arby's. In fact, on Chippewa a few blocks east of the city limits, Lion's Choice and Arby's both have locations a block apart. That's tight competition!

What keeps Arby's going is the vast improvement, over the past few years, in the quality and variety of the food they serve. What keeps Lion's Choice competing with them is the fact that they now serve the type of food Arby's made in the first place, and they do it better than Arby's did. Arby's makes a nice reuben on marbled rye. Lion's Choice sells a more than halfway decent French dip sandwich, with warm au jus on tap. Arby's specializes in a variety of premium sandwiches and side-dishes. Lion's Choice just piles shaved beef, pork, or chicken on a bun and, as an added bonus, sells itty-bitty chocolate-dipped ice cream cones (soft-serve, that is). While Arby's moves upmarket, Lion's Choice rushes in to fill the basic, meat-and-potatoes vacuum.

My latest dining surprise, then, came when I stumbled over a menu item on Lion's Choice's drive-through menu, something that outdoes Arby's: custard concretes, including such flavors as lemon and orange, as well as your garden-variety chocolate, strawberry, and so forth. I was so excited to see a lemon concrete on offer that I bought one and was captivated by its lemon-meringue-pie flavor. Another day I tried the orange one and enjoyed its thick, creamy, push-up-pop/dreamsicle flavor. 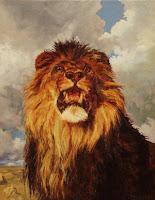 These are serious concretes! And at Lion's Choice of all places! I'm pretty sure they're using actual frozen custard, not just soft-serve ice cream. Soft-serve alone couldn't explain the "lemon-meringe-pie effect" that I got from my first Lion's Choice concrete. Plus, the texture is so thick and smooth. The concretes are served with a cleverly designed plastic spoon whose long handle and narrow, angled cup enables you to dip it straight up and down through the narrow opening in the cup's plastic lid, and retrieve a spoonful of the yummy stuff without having to wriggle it out of the opening and lose half of your spoonful. And though the flavoring is just a sugary syrup, the result is a distinct treat.

This is a serious threat to all the places (such as Hardee's, Chick-Fil-A, and Culver's) whose milkshakes and concretes daily tempt me to do dessert. The last place I remember seeing anything like a lemon shake was at Winstead's in Kansas City. I can now stop missing that place. Now the trouble will be how to say "No" to the part of me that wants to pull over at Lion's Choice on the way home from work. Be firm, self!
Posted by RobbieFish at 10:01 PM