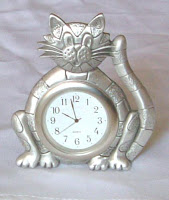 Even when I'm half-awake, I can't help but notice a certain pattern in my cat's behavior.

Every morning, at around 0510 Central, my alarm clock goes off. Now and then, when I'm feeling particularly unrested, I hit the snooze button in hopes of getting another 9 minutes of shut-eye. But if I do this, within the next minute or two my 8-year-old feline friend Tyrone jumps on my bed. He paws at the top of the covers, asking to be let in. Once let in, he immediately asks to be let out; then he asks in again.

There is no arguing with this cat. It is pointless to try to sleep in. Even when I feel tempted to call in and ask for a late start, my cat won't let me. If I really mean it, I have to throw him out of the room and close the door. But by then I'm up out of bed and there's no going back again--unless I'm actually sick. 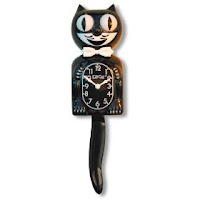 So, I can thank my cat Tyrone, in part, for keeping me honest about getting to work on time every day.

The few mornings each month when I am actually free to sleep until "whenever," I simply have to put up with his nudgings until he settles down outside the covers to take a nap. And then, inevitably, my bladder pulls its own alarm...
Posted by RobbieFish at 8:16 AM