When it comes to comfort food in my family, few dishes rise close to the level of Stuffed Peppers. I recently asked two reliable family informants to explain how they make the dish, and I got three (3) recipes. These are, to be sure, more riddle than recipe. Either they provide precise measurements but no oven temperature or baking time, or vice versa; many other details are left up to you to figure out for yourself. I reckon the real secret is to spend your whole adult life cooking for people until you're pretty good at playing it by ear... Or maybe it's just that, 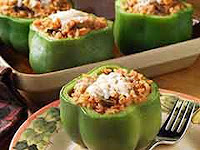 once you've unlocked all the secrets after years of painstaking experimentation, you don't want to give it all away!

Anyway, here are three "wish to the point of weeping that you were home for dinner" angles on the Riddle of the Stuffed Pepper. I would say "Choose your favorite," only by the time you do enough tests to get the recipe right, it will be your own. Best of luck, and try not to cry too hard!

STUFFED PEPPERS à la MOM
Bring 2 cups of white rice and 4 cups of water to a boil; turn off the heat and leave it covered for about 10-15 min. Peek at it occasionally so it doesn't overcook or scorch. The lid on the pan steams it done, so don't look too much!

Meanwhile, par-boil about 6-8 green and/or red peppers. In a separate pan, brown 1-lb of hamburger, half an onion minced, and 2 stalks of celery finely chopped. Keep breaking up the meat as it browns. After the meat is well cooked, add a can of diced tomatoes and a large can of tomato sauce.

Stir the rice into the hamburger-sauce mixture. Season to taste with seasoned salt and garlic powder. Stuff the peppers with the rice-meat mixture. Put them in a cake pan sprayed with Pam. Sprinkle parmesan cheese over the tops of the peppers. If you have leftover rice mixture, add some crumbled fried bacon to it and serve it as "Spanish Rice."

STUFFED PEPPERS à la STEPMOM
What my way-cool Stepmom lacks in theatricality (compared to Mom), she makes up in creativity and versatility. For example, she has not one but two recipes for this family fave. Though she holds the recipe cards close to her chest (I love the "etc."!), her rendition has always worked for me. Plus, it might fill in some of the gaps in Mom's account!

CLASSIC STYLE: Cook the rice. Add tomato sauce. Cut off the tops of the peppers and dice them into the rice along with browned hamburger, onion, chili powder, and garlic. Blanch the peppers, then stuff them with the rice mixture and stand them in a baking pan surrounded by extra rice mixture. Bake them about 45 minutes to an hour at 350 F.

DIABETIC STYLE: Blanch the peppers and stuff them with a mixture similar to meat loaf. Pour tomato sauce seasoned with onion, garlic, Worcestershire sauce etc. over them and bake.
Posted by RobbieFish at 11:08 PM

Thanks a lot for gifting me the STUFFED PEPPERS dish..have bookmarked and will prepare this soon..