Here is a bonus for completing "Assignment Two" of "How to Read a Good Symphony." I throw it in, at no extra charge, simply because I have it on the same disk as Prokofiev's 1st, performed by the New York Philharmonic and conducted by Leonard Bernstein. It's a good disk!

Prokofiev's Fifth Symphony in B-flat major, op. 100, was completed in 1944, following a fourteen-year break from writing symphonies. Utilizing a much larger orchestra than the Haydn-sized one he employed in his First Symphony (1917), this later work is considerably longer (close to 50 minutes), 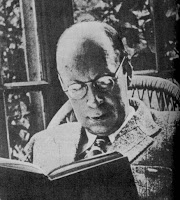 explores more profound and complicated emotional territory, and achieves a higher synthesis between the compositional techniques Haydn bequeathed and the broader musical vocabulary of the 20th century.

Movement I, Andante (medium tempo) opens gently, with a theme that aspires upward against a heavily shadowed background. If the style of the First Symphony could be loosely compared to that of Haydn, the style this passage brings to mind is that of Mahler - though this is an imperfect analogy, to be sure! As this first group softly dies away, a second theme emerges, a rambling melody introduced by flute and oboe in unison. Later in the second group we hear more of the type of music - full of angular intervals and insistently repeated notes - that Prokofiev used to sparkling effect in his First Symphony, while here it sounds distressing. In the development, ideas from both groups are juxtaposed in a variety of combinations, and woven together contrapuntally, until it is hard to spot where one ends and another begins. The general tone is serious but not earthshakingly dramatic - as if Prokofiev is confiding something to us of great personal importance, as much a matter of mind as of heart. The movement climaxes over a growling pedal point in which the piano's role in the orchestra becomes apparent.

Movement II, marked "Allegro marcato" (fast, emphatic) is this symphony's Scherzo. After a few opening bars of accompaniment music, the clarinet introduces an odd but catchy tune, which soon moves through other sections of the orchestra, including the piano. There is something inherently nervous about this music, and the sinister role played by the percussion and brass instruments suggests a military reason for this nervousness; remember when this piece was written! In the middle of the movement, the music enters contrasting territory where, again, the initial theme is voiced by the clarinet. Here the nervousness is tranformed into an insistent rhythm underlying many contrasting episodes, suggesting scenes viewed from the window of a cross-country train -

this wouldn't be the only time Prokofiev wrote "train music"! The clarinet tune that started this section comes back again at the end, followed by a sinister return of the main Scherzo music, initially scored for brass instruments. At one point during the panicky last two minutes of the movement, there is a brief passage that sounds muffled, like a hand coming from behind to cover your mouth and stifle your scream. It's really unnerving if you let your imagination play with it.

Movement III, Adagio, like so many of Prokofiev's pieces, begins with a passage of pure accompaniment, before a melody begins to unfold, once again in the clarinet. It is another one of those long-unspooling tunes, crossing from one instrument or section of the orchestra to another. The atmosphere of this music is reminiscent of a still, sleepless night. More animated episodes follow, their insistent, threatening rhythms combining with the initial theme in a variety of ways. So much of the movement's material is based on the opening theme that one is tempted to call it a set of variations, but there is more to it than that. It is an ongoing musical argument, deftly combining satirical remarks with shudders of horror, but frequently returning to a single point that the composer wants to emphasize. The conclusion is unexpectedly sweet.

Finally, we come to Movement IV: "Allegro giocoso" (fast, jocular). It begins in a low-key manner, even quoting from the slow movement that has just ended. After about a minute and a quarter of slow intro, we're off to the races, in a movement with driving rhythms, repeated accompaniment figures (that's ostinato for your vocab-building pleasure), and a plethora of musical ideas, from a soaring refrain theme to a jackhammerlike countersubject, plus contrasting episodes running the gambit from gentleness to nobility. Prokofiev's orchestra shows off all of its quirky colors, including a prominent role for the bass-tuba and his characteristic writing for the upper range of the clarinet. Things get really exciting once all the themes have been laid out and Prokofiev can combine them in various ways, as the music builds in volume and momentum. The texture thins out at the very end for a vaguely macabre coda, which always reminds me of a clockwork device ticking away. 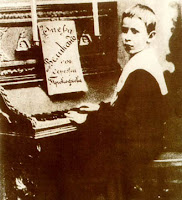 I don't put much stock in numerology and like superstitions. But really is remarkable how many composers' fifth symphonies are my favorite of all their works. Prokofiev's Fifth is one of those special pieces for me. I challenge you to seek out a recording of it - buy it used online, or pick it up at Borders, or check out of the library even - and see if it doesn't become a special piece for you too!

IMAGES: Here are some of my favorite pictures of Prokofiev. First, the composer doing something I obviously love to do. Second, the last known photo of Prokofiev, taken in 1952, the year before his death. And finally, an early photo of ditto, playing an instrument similar to one I had when I was young. (Actually, I still own it, but it's in my parents' garage.)

EDIT: Here is a video of Kenneth Woods conducting a Mexican orchestra in the first movement of Prokofiev's 5th:
Posted by RobbieFish at 4:17 PM