This past week was another exciting performance week for the St. Louis Symphony Chorus. I count it among the most enjoyable programs we've been a part of since I joined the chorus five seasons ago.

The first half of the program featured the orchestra only (no chorus), which meant a complimentary ticket for me both Friday and Saturday night. It was a treat to hear them play Igor Stravinsky's Symphony No. 1 in E-flat, interpreted by enthusiastic and charismatic home-team conductor David Robertson. This early, early, early piece (Opus 1, even!) sounds more like a late masterpiece of the Romantic era than a typical Stravinsky, though in his pre-concert lecture Robertson argued persuasively that the key elements of Stravinsky's style are all evident in it, albeit blended with artifacts of the preceding generation.

I'm not sure which I liked more: Robertson's musical examples showing (for instance) how the closing bars of the slow movement are related to the celebrated transition to the final scene of The Firebird, or his analogy to an exhibition of paintings by Mondrian showing how the artist moved from early, scenic representations (though always viewed through some type of lattice, such as a fence in the extreme foreground) toward a more abstract exploration of the lattice structure itself. Viewing Mondrian's paintings that way could give one an insight into the thought process involved in the artist's later work, suggesting that he was driven to contemplate the filters through which we view reality. In a similar way, Stravinsky's angular rhythms, twisting harmonies, skirling woodwind textures, and crisp, dry sonorities take on a new significance when placed against a background of broad, warm Romanticism. Their presence puts an unmistakably ironic stamp on music that could otherwise be mistaken for a late lost masterpiece by Borodin (particularly in the scherzo and the finale) or perhaps even Tchaikovsky (cf. the slow third movement). 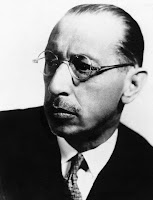 Stravinsky never withdrew his E-flat Symphony from circulation, so apparently he was never ashamed of it. Nor should he have been. It is excellent music, though the work of a composer who had not yet formed his own unique style. The first movement struck me as the least derivative of the four--or if it does echo the work of elder composers (such as, say, Glazunov), at least it is not work I am very familiar with. It opens with a striking gesture and carries forward an intelligent yet good-humored argument. A chromatically side-winding secondary theme, volleyed between a succession of solo winds, continues to run through my head days after I first heard it. Both of the Borodinesque movements, Nos. 2 and 4, featured a triangle part, which I enjoyed watching played, especially since the boyish triangle-player performed his part with fierce concentration and incredible precision. Another riff I got a kick out of was Daniel Lee's brief cello solo, consisting of two phrases (repeated later in the same movement), the latter of which seems to rise up off the ground and disappear into thin air.

After the intermission, the chorus joined the orchestra on stage. First we sang three sacred choruses by Stravinsky, written for his Orthodox parish in Paris in the Church Slavonic language. The orchestra sat quietly while the chorus sang these chant-like, a capella numbers: a gentle Ave Maria, a rapid-fire Nicene Creed, and a slow plaintive Our Father whose final chord dovetailed with the opening of Sergei Prokofiev's Alexander Nevsky.

This last piece is a huge cantata based on (and, beyond belief, actually longer than) Prokofiev's own film score for the Sergei Eisenstein epic about a 14th-century Russian leader who held off an invasion by Nordic crusaders at Pskov, in a decisive battle on the frozen Neva river. The cantata opens with an instrumental evocation of the vast motherland under the oppressive yoke of the Mongols. Then the chorus joins in a lyrical anthem of Kievan Rus patriotism, full of longing and hopeful devotion, seasoned with a bit of masculine bravado. Movement 3 introduces the Catholic crusaders with their mindless, soulless, perpetual chant, "Peregrinus expectavi pedes meos in cymbalis."

SIDEBAR: No performance of this cantata is complete without somebody attempting to interpret these Latin words. Numerous conflicting translations have been put forward, none of which make much sense; in the end, most interpreters have finally thrown up their hands and admitted that the crusaders are singing Latin nonsense, perhaps symbolic of their spiritual emptiness. More recently, a chorister who happened to be rehearsing both Nevsky and Stravinsky's Symphony of Psalms at the same time noted that each four-syllable segment of Prokofiev's Latin nonsense echoes a section of Stravinsky's celebrated psalm-setting. So, in that chorister's opinion, Prokofiev is taking a pot-shot at his resented rival Stravinsky, perhaps symbolically tarring him with the brush of "empty formalism" by putting his words in the invaders' mouths.

Robertson, meanwhile, posited yet another stunning theory during his pre-concert talk. Perhaps Prokofiev, already in 1938 when he wrote this music, regretted returning to the Soviet Union just in time to get caught up in the Stalinist terror. Perhaps, by borrowing random words from Stravinsky's choral masterpiece, he was sending his Americanized colleague a coded message, a contrite admission of his own hubris combined with a plaintive warning not to make the same mistake.

"I, a pilgrim, thought I was going to be walking with cymbals on my feet," Prokofiev says in words that perhaps no one but Stravinsky, at that time, would have recognized. "Instead," he may as well have added, "they turned out to be shackles."

The cantata moves on to Movement 4, a patriotic song by turns raucous and sentimental, in which the peasants take up arms against the enemy and Prokofiev sets up themes that will form part of the terrifying Battle on the Ice of Movement 5. This long movement is really the heart and soul of the piece, and it was one of the most exciting pieces of instrumental music I have had the honor to witness from the stage of Powell Hall. The chorus only stands up for a relatively brief central section in which the Latin chant becomes hysterically and then ferociously loud. At one point we literally screamed three iterations of "Vincat arma crucifera hostis pereat!" (Victory at arms to the crossbearers! Death to the enemy!). The most dramatic part of the battle, however, happens after the chorus departs the scene. Clashing themes, in clashing keys, battle it out in what at first seems a glorious, patriotic battle and increasingly becomes a savage, gruesome melee. Here Prokofiev's music is so unafraid of being ugly that it achieves an unexpected kind of beauty. After building climax upon massive climax, each dwarfing the one before it until you are forced to stop thinking, "This is as big as anything could possibly get," Prokofiev brings the battle to a terrifyingly ambiguous close: for, musically, it is impossible to tell whether it is victory or defeat. Only in the shiveringly sweet coda, where one seems to hold a mortally wounded comrade in one's arms on the frigid battlefield, can one cheer his dying moments with the bittersweet news that the motherland has been saved.

Movement 6 was a gorgeous solo by mezzo-soprano Elena Manistina, who wandered out on stage during the instrumental intro as if looking for something she had lost. Though I have never seen a translation of the text she sang, I understand that it was based on a scene in the film in which a maiden searches the battlefield for the body of her betrothed, avowing that she intends to recognize him not by his beauty but by his bravery. And finally, Movement 7 depicts Alexander's triumphant entry into Pskov, with the ringing of bells and the unequivocal affirmation of the anthem previously expressed in tones of hopeful longing. It's a transporting finish for a spectacular cantata and, as I may have mentioned before, one of the most fun symphonic programs I have been a part of.
Posted by RobbieFish at 12:13 AM