I could do a full analysis of Mahler's Fifth Symphony. But since others have already done a very good job of it, I feel no need to repeat what has already been said. So, to carry on my too-long-neglected thread on "reading a symphony like a good book," I'm going to content myself with recording my impressions, the feelings and meanings the music conjured in me. But first, just a few high points. 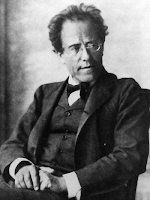 Gustav Mahler (1860-1911) wrote the fifth of his nine completed, numbered symphonies in 1902-03. Numerically, it sits in the middle of his symphonic work. It is a typical work - if not the typical work - of the middle period of Mahler's composing career. In terms of popularity, it holds a high position among his purely instrumental symphonies (as opposed to the ones with singing parts). It straddles the line between old and new, looking backward on the form, language, and procedures of the classical-romantic symphony and forward on the broader, bolder forms, language, and procedures of modern art music.

It is sometimes referred to as the symphony "in C-sharp minor," but Mahler opposed mentioning a key designation in its title. It begins in C-sharp minor, but ends in D major and covers a wide range of tonality in between. Scored for a large orchestra, it uses its instrumental forces more to create a broad range of tone-color combinations than for massive effect. It can be analyzed as a symphony in five movements, each ranging from 9 to 15 minutes in length; or as a three-part work, with the first and fourth movements serving as extended, slow introductions to the faster movements that follow them.

The first movement is a firm, slow-paced funeral march. It begins with a sinister bugle call. After an opening fanfare, the mournfully expressive main theme is announced by the strings. Variants of the opening bugle call introduce repeats of this theme as well as two contrasting episodes. About five minutes in, the mood becomes more intense and troubled. The main theme returns in different instrumentation, combined with another melody. The second major episode, round about 10 minutes, is full of urgency. The final return of the fanfare is surrounded by a miasma of anxiety, but then the music quickly dies away like a funeral band marching out of earshot.

Movement II is an emotionally stormy sonata. Frantic from the beginning, it frets and seethes for about a minute, then suddenly subsides to an atmosphere of relative calm. Presently a cello theme is heard, mooching morosely along through a pleasant garden full of flowers and singing birds. This would be a good theme for a film sequence in which someone rides in the back of a luxurious car, looking through soundproofed windows at a scene of terror and chaos: it conveys a sense of numb detachment. Mahler then plays with these ideas as the development passes through a variety of moods, from lonely ennui to hysterical gaiety to leaden-limbed dread. A triumphal hymn arises from the recap, seeming out of place and proving to be just that as the earlier, disturbing moods return. The movement comes to a chilling, ghostly end.

Now the Scherzo cavorts heavily into view like an overweight wood sprite, or a folk-dance performed by full-figured peasants. The music has a quality of rustic magic in it, but a thread of menace runs through it as well. A horn call around the 5-minute mark calls a pause to the festivities, summoning the revelers to reflect seriously on what, to my mind's ear, sounds like a piece of unexpected bad news. The central trio continues with a passage for pizzicati strings that reminds me of the fidgety, earthy thoughts that can pass through even a fairly pious mind during a serious occasion - like when one can't stop wriggling one's toes to the beat of the village dance, even during a funeral oration. This subdued atmosphere continues for several minutes before gradually ramping back up to a reprise of the gay opening section. When, again at the height of the revelry, the horn call breaks in, it signals a coda in which somber introspection gives way to an access of joy.

Next comes the most celebrated movement of this work, a "very slow" Adagietto in F for strings and harp. This is music of the utmost tenderness - the kind of music that makes you want to hold your breath. Though its atmosphere drips with emotion, this movement is also, paradoxically, a model of musical unity, economy, and subtlety. It's like a musical expression of the feeling of waking up in the wee hours and 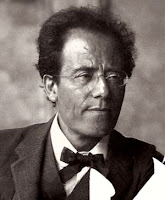 looking on the person next to you, feeling your heart overflowing with love, then gently falling asleep again. And if I, the eternal single, can smoke that meaning from this movement, it must communicate powerfully indeed.

The finale of Mahler's Fifth is a rondo inspired by the finale of Beethoven's Second. It begins jovially, the music again evoking a rustic atmosphere full of good humor and pleasure. As light-hearted as the themes are, Mahler subjects them to a suprisingly rigorous contrapuntal treatment - an artifact of his study of J. S. Bach's music around the time he wrote this piece. Overall the movement is driven by a confidence not typical of the composer, but appealing to the listener. Late in the movement there is one vaguely disturbing moment, but the cheerful momentum recollects itself, culminating in an improbably brassy, glittering triumph.

Like Mahler's other symphonies, the Fifth quotes themes from his own songs, themes which may insinuate a thread of slightly morbid irony into one's interpretation of the piece, if one recognizes them. But Mahler was a great one for morbidity, as his fans know too well. Taken as a whole, however, this is as refreshingly un-morbid a symphony as Mahler ever wrote. Full of thought-provoking contrasts, ear-catching colors, and a huge range of moods and textures, it is unmistakably a great book to listen to!
Posted by RobbieFish at 2:04 PM