I had some business at Kinko's, near the corner of Grand & Arsenal, around dinnertime. So I decided to extend my business in the neighborhood to include a meal at one of my favorite joints, the Mekong Restaurant on the corner of Hartford and Grand, more or less right across the street from Kinko's.

Usually, when I eat at the Mekong, I indulge in the crispy eggrolls, a plate of hot curry, and a glass of that wonderful, sweet-and-strong iced coffee you only find in Southeast Asian restaurants. You know the type: French press coffee, served in a glass with a shot of condensed milk and a second glass full of ice for you to stir into the coffee once it stops dripping from the press pot. I couldn't resist it tonight. But I did resist my usual curry craving to try something different.

First, I went with the spring rolls instead of the eggrolls. In Vietnamese cuisine, a spring roll is quite different from the crispy fried snack that goes by that name on your neighborhood Chinese buffet. A Vietnamese spring roll comes wrapped in stretchy rice-paper, through which you can actually see what's inside it. And what's inside it? Some fresh greens (like lettuce and cilantro leaves). A few crisp sprouts, maybe. A couple slices of roast pork, maybe a shrimp or two. And lots of vermicelli. It's served cold, and its crunchiness comes from within. The dipping sauce is dark brown, syrupy, and touched with a peanutty flavor. 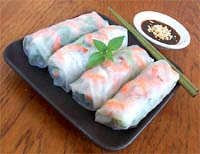 The appetizer wasn't new to me, but the main course was. I ordered a soup I had heard great things about, but had never tried until now. Its name on the menu consisted of four or five one-syllable words I would never trust myself to pronounce correctly - particularly where the tonal nature of the Vietnamese language is concerned. But this string began with the words pho tai, a phrase I knew by reputation. I have a notion that the "pho" is pronounced like the F-word, only without the "ck" at the end; but I saved my self the embarrassment of finding out that I was wrong by asking for "Number 10" on the menu. How helpful of the folks at the Mekong to number their dishes! (FYI, the spring rolls are Number 4.)

Anyway, here's what pho tai is like, Mekong style. It comes to you in a huge glass bowl. On the side is a surprisingly large plate of garnishes, including some leafy herbs (cilantro for sure), a mess of sprouts, and other vegetable matter you can add to your soup for taste and texture, as you see fit. In the bowl itself is a light, savory broth, seasoned so beautifully that, after one has removed every solid edible from it, one may well stick one's straw into it and suck the remaining liquid down to the dregs. That's what I did. As for the solid stuff, that chiefly consists of long, fine noodles, chunks of sausage, and slices of beef, with bits of several different kinds of onion and crumbled herbs to round it off. 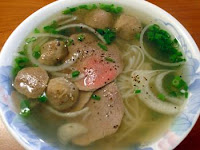 I really, really loved this soup. Eating it with chopsticks was a pain, though. At least, it's a pain if you're as mediocre at using chopsticks as I am. Having seen it done before, I understood the principle: you use the chopsticks to fish stuff out of the soup and arrange it on a spoon, then you use the spoon to shovel it into your mouth. The really tricky part was preventing a pile of noodles from hanging over the side of the spoon. Hanging over, I found, is tantamount to sliding over and ending up in the soup again.

Eventually I decided to spare myself hand cramps and a shirtful of soup spatter, and I switched to using my fork to arrange the noodles on the spoon. Then I really did finish the soup with my straw, because sipping broth one spoonful at a time wasn't how I chose to see myself five years from now. And yes, because it was that good.

I may not know how to say pho tai correctly (except I'm sure there isn't a k in it). But I know how to say "Number 10, please." I think I could get used to that.
Posted by RobbieFish at 9:48 PM