Last night's second rehearsal of the Symphony Chorus was another eye-opener. After running through Faure's Pavane and parts of his Requiem again, we started working on the Rossini Stabat Mater. Out of well over a hundred singers, only four admitted to having sung in this piece before. It's hard to believe, but this piece is going to get its St. Louis Symphony premiere this season! 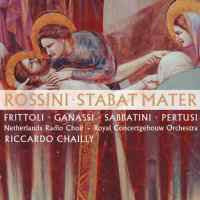 I shouldn't say "hard to believe," really. I don't have the right, since I myself am not as familiar with this Rossini piece as I should be. It has some thrilling vocal numbers, though, including a stunning fugue finale. The Kalmus vocal scores we are using (because they are cheap) are a bit disappointing. The English translation does nothing but get in the way, since it clearly has nothing whatsoever to do with the meaning of the Latin text. I doubt that whoever did the translation was even a Catholic; it doesn't even mention the Virgin Mary, who is the focal point of the original text.

Chorus director Amy Kaiser recommends the performance recorded by Riccardo Chailly. I'm all over it. She says it captures the devotional meaning of the piece, rather than showcasing the operatic rhetoric many interpreters have found there. I would like to hear that. But mainly, I am already excited by the chance to hear the full orchestra, chorus, and a quartet of professional singers belting out this powerful piece in live surround-sound!
Posted by RobbieFish at 8:45 PM