Mendelssohn visited Scotland in 1829, and was inspired by the awesome ruins of a medieval chapel. From this beginning he finally completed his Third Symphony in A Minor, widely known as the "Scottish" Symphony, in 1842. If you are still unsure what "Romantic" sounds like, listen to this symphony!

It begins with a slow introduction that foreshadows the themes of the main first movement. The sonata opens with quiet intensity, its serious yet rhythmically energetic theme building up to a transition passage that all but explodes with passion. Then the clarinet introduces a second theme group over an accompaniment based on the first theme. After some anguished passagework, the exposition concludes with a gorgeous, singing codetta theme. Each of the above ideas gets a fair share of the development section, in which Mendelssohn shows his contrapuntal chops. A poignant cello statement concludes the development and overlaps into the recap, where the explosive transition is omitted. The coda begins like a repeat of the development, then accelerates to the thrilling, closing chords...but wait! The music hasn't stopped!

Yes, folks, Mendelssohn drops a BOMBSHELL! Instead of bring the first movement to a solid ending, he makes a transition back to the slow introduction - lets it die away - then, without allowing a break between movements, he goes straight into the scherzo! So the intro to the first movement also serves as a bridge to the second. You see how craftily old Felix unifies his material? 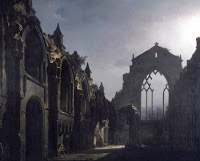 Movement II begins with a brief fanfare. Then the clarinet introduces an exuberant theme that seems to flow smoothly over a busy background. This theme alternates with a second, mincing, fussy-sounding subject that grows more boisterous and confident with each appearance. There is no "trio" or contrasting middle section; this movement is more like a quick little rondo than an "orthodox" scherzo.

Movement III is an über-Romantic slow movement. Its first subject is a warm, long-drawn-out, almost gushy melody that seems likely to spin endlessly out of a couple of brief opening phrases. A second idea, beginning with a horn call, has a more stately aspect, and at times picks up a tragic tone. Both themes are drawn together by the same gentle, sympathizing sort of musical "paragraph ending" - what music snobs stuffily refer to as "cadential extension" - material so memorable that it almost sounds like a theme, but that unmistakably serves to delay the period at the end of the sentence.

Movement IV is one of those movements that is supposed to have oodles of themes - somewhere I read the figure "at least four" - but it hits me as having the usual two themes, plus some dramatic transition material. The first theme group, however, has two distinct ideas in it: the opening gesture with its teasing character, and the clucking idea that grows out of it. The second theme, introduced by the oboe, turns out to be more important. The first time it comes around, it is grouped with a truly rockin' trumpet reply. The development section is eerily quiet to begin with, but it builds and builds as the second theme assumes increasing significance. It finally works its way to what sounds like a musical decision; then immediately goes all slow and quiet, dying out after a truly strange echo of the second theme. Then, Mendelssohn drops his second BOMBSHELL by closing the symphony with a coda based on a seemingly brand-new, chorale-like theme. This noble tune does, in fact, have some similarity to material heard earlier in the symphony - yet another shrewd experiment in pulling the symphony's movements together in an artistic unity.

Mendelssohn's Third is a symphony that takes itself very seriously. For that reason, it is perhaps not as immediately appealing as his vivacious, bubbly Fourth (the "Italian"). On the other hand, there are moments in the Fourth where I sense that Mendelssohn forgot which themes he was supposed to be developing. There are no such problems in the "Scottish" Symphony, which epitomizes the art of deriving a maximum of effect from a minimum of means. And as you listen to the Scottish Symphony, try - just you try - not to visualize ruined castles and tumbling highlands!

EDIT: Here is Kurt Masur conducting the finale of this symphony with the Leipzig Gewandhaus Orchestra:
Posted by RobbieFish at 3:49 PM