This evening the St. Louis Symphony Chorus had its first rehearsal for the 2007-08 season. It was nice to see so many familiar faces, plus some new ones. And even as we read through our music for the first time, Powell Hall echoed with some amazingly beautiful sounds.

We had fun reading through almost all the chorus part of Faure's Requiem (the big-chorus version), and also his Pavane (the version with the "optional chorus"). We're going to have to work on some French text for that one. These two works are lovely pieces on the lighter side of art-music. Yes, even the Requiem is somewhat lightweight, but very pretty in a delicate, childlike way.

We also read through the Act II finale of Beethoven's opera Fidelio. Though we sang through the Pavane on "La la la" (rather than attempting the French), we gave Beethoven's German text our best shot and enjoyed a spirited read-through of the opera's triumphant chorus. 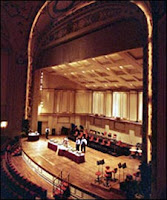 It looks as if this season's notes will be much easier to learn than last year's. That will give us more time to polish our music-making and learn our parts so well that we can keep our eyes glued to the conductor, rather than sneaking glances at him over the top of our scores. I have already noticed an atmosphere of relief and relaxation after the rigors of the past two seasons, in which we tackled some very challenging modern pieces. But I think those tough pieces will also bear fruit in a more accurate and responsive ensemble.
Posted by RobbieFish at 9:40 PM

I sang Tenor in Faure's Requiem in college. Great stuff.