What Do People Say That Sin Is?

The following devotion started out as an attempt at writing for a Lutheran magazine. It didn't go over very well, and I understand why; the analogy is a bit weak. But I'm sharing it here anyway: partly because this blog is where I flaunt all my half-baked writings, and partly because the (admittedly controversial) scientific theory it describes really fascinates me. If you find it spiritually edifying, that's gravy! 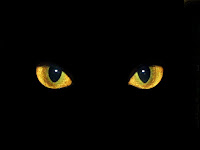 If you ask most people to explain what “sin” is, they will say it is something that you do. Most people think of sins as separate actions that violate certain rules. By that thinking, sins are only occasional breaks from your normal behavior.

People view sins like cracks in the sidewalk: they turn up here and there, but they don’t make up the whole sidewalk. Or perhaps they think sins are like nuts in a cake: you may be able to pick them out without tearing the cake into crumbs.

WHAT IS SIN, ACCORDING TO GOD’S WORD?

God’s Word describes sin altogether differently. In Romans 7, the Apostle Paul writes that sin is a living power that “dwells in me,” like a parasite (Romans 7:17, 20). And this living power of sin struggles to control my will and my actions.

In this post, you see the eyes of a black cat, and something else. That “something else” is a parasite called Toxoplasma gondii. T. gondii lives mainly in cats. It is so small that you can only see it through a microscope. Yet it is estimated that T. gondii infects half of the people on earth!

Researchers in England say that this amazing parasite can change the behavior of rats, and perhaps humans as well. When rats eat cat litter infected with T. gondii, they lose their fear of cats. Infected rats will walk right into an area that smells like cats, making it easier for cats to eat them. This way the parasite gets into more and more cats.

A PARASITE THAT CONTROLS YOUR BEHAVIOR!

A new study suggests that T. gondii can even effect human behavior. People infected with T. gondii tend to have a different personality from the average, uninfected person. Women with T. gondii may be more likely to have children with schizophrenia. Drugs used to treat mental illness can also treat an infection of T. gondii.

According to Paul, sin is like a parasite living in us, changing our behavior. Sin is constantly present, spoiling our efforts to do good. Paul says that the sin in him “deceived me, and...killed me” (Romans 7:11). Paul also says, “For I am not practicing what I would like to do, but I am doing the very thing I hate” (Romans 7:15). “For I know that nothing good dwells in me, that is, in my flesh” (Romans 7:18). Paul then concludes:

“I find then the principle that evil is present in me, the one who wishes to do good. For I joyfully concur with the law of God in the inner man, but I see a different law in the members of my body, waging war against the law of my mind, and making me a prisoner of the law of sin which is in my members. Wretched man that I am! Who will set me free from the body of this death?” (Romans 7:21-24).

WHAT DOES THIS MEAN FOR ME?

What this means is: sin is not just an occasional pimple, rash, or sniffle in your spiritual health. Just as you cannot cure a disease by treating its surface symptoms, so you also cannot master sin simply by working hard to correct your behavior. To fight the power of sin, you need a cure for the infection that lives deep inside you, the cause of all these visible signs of sickness.

As Paul said in Romans 7:24, “Who shall set me free from the body of this death?” The answer is, “Jesus Christ our Lord” (Romans 7:25). Jesus died on the cross, not just to pay for our separate sins, but to deliver us from the power of sin that lives in us. His Word, His forgiveness, His body and blood are the medicine we need to fight sin's power.

PRAYER: We thank you, Lord Jesus, for connecting us to your death and resurrection by Baptism (Romans 6:4). Because of this, we are now “dead to sin, but alive to God” in your name (Romans 6:11). Sin shall no longer be master over us (Romans 6:14). Keep us in the grace of our baptism, so that your power to defeat sin may always live in us. Amen.

IMAGES: a Window Maker theme which I touched up a bit in Photoshop; Toxoplasma gondii, from this Washington University news release.
Posted by RobbieFish at 6:36 PM

Robbie,
My definition of sin is: "anything that separates us from God" I'll admit that I stole it from an Episcopal Priest who served us for 15 years. She was a very wise lady.