During my many wanderings, I have encountered some really stupid, local attempts to control traffic. I mean "stupid" in the sense of "that which makes you hopping mad at the time, and which makes you laugh later."

I think the all-time Grand Prize for Stupid Traffic goes to a small town in southeastern South Dakota, where part of the main drag had been torn up for resurfacing. At least temporarily, to manage the congested traffic during this construction project, the town put up an interesting combination of signs at one, central intersection. On the north-south road there were yield signs; on the east-west road, stop signs. 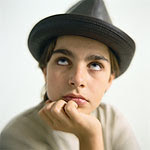 Incredible.
Posted by RobbieFish at 3:58 PM