Sweeties Out the Wazoo

My taste in candy has changed a lot since I was a kid. I used to think the best candy was a chunk of solid milk-chocolate the size of a checkbook, or maybe chocolate wrapped around a cigar-shaped hunk of malted-milk flavored marshmallow fluff, or a cigarette-sized stick of crispy wafer. I'm not so sure about that now. In fact, when I survey the last hundred times I gave into an urge to buy sweets for myself (which isn't hard; I don't have to think back very far), I find that there isn't much chocolate involved.

Here are the sweets that I crave the most. In some instances, I've been pretty good for a while...or maybe it just helps that I crave things that you can't buy just anywhere. I sometimes mooch around for years, hoping to catch sight of some of these things, before serendipitously stopping at a filling station in the middle of nowhere and finding the shelves loaded with them.

Atomic Fireballs kept me awake through many a long trip, especially ones that started before the sun came up or ended long after dark. They come in a variety of sizes and package styles, but the best kind are a bag of individually-wrapped balls, the size and hardness of a jawbreaker, but blazing all the way through with a painfully strong cinnamon flavor. One time I sucked on a series of Atomic Fireballs all the way from Fargo ND to somewhere east of Brainerd MN, and when I got home I was alive, awake, and unable to speak around the rawness of my tongue.

My current deadliest sin is Chewy Spree. It used to be sold in rolls, like regular Spree ("a kick in the mouth!"), but now it comes in a little pillow-pack, similar to M&Ms. This candy is not really very chewy, but it's easier on the teeth than the regular kind. I typically buy a pack at Walgreen's, across the street from the neighborhood movie theatre, and sneak it into the show. This saves me tons of money, overagainst buying more candy than I really want to eat at prices I don't want to think about. Spree are tart little wafers with a hard candy shell, and they come in an assortment of fruit flavors, including green apple, cherry, grape, lemon, and tangerine.

A candy bar that has become hard to find lately is the Chick-O-Stick. Again, you can get this confection in various forms, including individually-wrapped miniatures that stick to your teeth. The best kind is the regular-sized stick. It's a crunchy, peanutty stick, similar to what you find inside a Butterfinger bar, only with coconut around the outside instead of chocolate. The trick is finding them fresh; they aren't much fun once they start to grow stale.

I haven't had a Chocolate Orange in years. Now and then I notice signs that the brand has branched out into other flavors, such as Chocolate Peach, Chocolate Apple, and Chocolate Raspberry. I think that's ridiculous, the same way it is ridiculous to keep adding new flavors to Froot Loops cereal until it tastes like a compost heap. It's an old story: Company finds it has a good thing going, and tries to spin off something just as good, only it never is. They would have been better off sticking to the one thing they did well. And I can't imagine a Chocolate Raspberry or Peach having the effect of a chocolate orange. You have no idea how satisfying it is to pound that foil-wrapped ball of chocolate on the tabletop, then open the foil and find that it has broken into segments just like those of a real orange. Only with chocolate. Mmm. 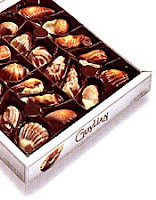 Around the time I last had a Chocolate Orange, someone gave me a box of Belgian marbled chocolate molded into the shapes of various kinds of seashell. The chocolate was very good, and each piece had a hazelnut-cream center. That was a memorable gift. I think I gave another one like it to myself another time, and I tried to make both of them last. This was candy that not only tasted good, but looked good and felt good (in the hand and the mouth). They look like they should sound good, too, but I might as well tell you now: if you hold these shells to your ear, you won't hear the sea.

Here is another candy I have found useful for keeping myself attentive on a long road trip: gummi peach rings. Many convenience stores sell one or two generic brands of these in 2-for-a-dollar plastic bags. They also come in sour apple and watermelon flavors, and I think I once saw strawberry ones too. Coated with a little of that crystally stuff that makes sour candy sour, these little fellows poke at your tastebuds in a very refreshing manner. Like Chick-O-Sticks, they don't improve with age; however, even the toughness of those close to the end of their shelf life has its uses when you're frustrated by miles of road work and you need something to clench your jaws on. Be careful not to swallow till they are thoroughly chewed, however; nothing changes your perspective on that road work quite like a near-fatal choking incident behind the wheel.

Here are the "classic" Runts candies. Like Spree, both the hard and the chewy kind have their virtues. However, I've been in Runts mourning for several years, since they changed the flavors. Back when I could get Runts out of a vending machine at school, they came in banana, cherry, strawberry, orange, and lime flavors. I always used to share them with my friends, because I hated the banana ones and didn't miss the cherry and strawberry ones so terribly, but I LOOOVED the orange and lime ones. Then the jerks at Wonka decided to freshen things up, so they introduced raspberry and watermelon flavors...and got rid of lime. Ever since my mad rush around town buying up all the old Runts left over from before the flavor change, I haven't had Runts once. Not that I mind watermelon and raspberry, but I rather resent that they fired my favorite flavor.

These little guys are Wine Gums. Several different outfits make them, I think mainly in the U.K. I first heard about them through reading a Harry Potter book, in which there was a joke about some spell changing a dragon's teeth into wine gums. Then I saw this box in the foreign foods section of my local superdupermarket. I tried them, and I've kept trying them, because they are really a superior gummi candy. When they are relatively fresh, they are soft and pleasantly chewy (later, they become a bit tough). They come in a variety of colors, shapes, and flavors, including such novelties as grapefruit, and each one has the name of a kind of wine printed on it in raised letters. I wish more people would try these, because I'm sure they would be hooked and one would be able to find them in a wider range of stores.

Finally, I come to a liquid candy that has probably taken more years off my life than second-hand smoke, beer, air pollution, and Lutheranism put together. This stuff is seriously addictive. It is so good that I advise you NOT to try it, if you haven't already done so; because one day you will wake up in a gutter, surrounded by empty Yoohoo bottles... But seriously, this is a non-fat, practically non-Dairy chocolate milk drink which, in my opinion, has just a touch of cinnamon in its flavor. You have to shake the dickens out of it before opening the bottle, because the flavoring tends to settle toward the bottom. Like the Chocolate Orange, it has come in a range of superfluous flavors, such as Strawberry, Mocha, and Double Fudge; only the last-named shows any sign of sticking around. But it's the original flavor that really rules. You can get different sized bottles and cans, in different sized backs and all; but I think aluminum actually harms the flavor, so I always buy the individual bottles. Walgreen's has a good deal on it these days; no matter what I go in there for, I almost always come out with a bottle of Yoohoo.

All this explains why I am starting to waddle. Even when the close proximity of great stage, film, music, and art experiences cannot coax me from my monastic cell, I have been known to go out specially to buy Yoohoo and Chewy Spree. I don't particularly care whether the next President of the United States is Hillary Clinton, Hillary Duff, or Hilary of Poitiers; but there are days when I feel like writing a strongly-worded letter to the Wonka people about those lime Runts. And if I come to your wedding, or your child's graduation, etc., bearing a gift of chocolate seashells, make no mistake: I will be envious of the recipient.
Posted by RobbieFish at 7:02 PM