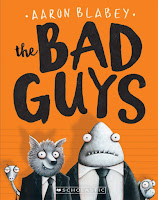 Here is a cute little kids' graphic novel, perhaps better described as a graphic chapter book, in which a wolf, a shark, a snake and a piranha try to overcome their reputation as "bad guys" by attempting to do something noble.

It's really all the wolf's idea, and between his efforts to keep the other three in check and his over-the-top plan to free a pound full of puppies, the results are completely goofy. The artwork is spare, direct, a bit sketchy, with a juvenile sensibility raised to the level of comic genius by the characters' facial expressions. The total effect reminds me of a game of pretend, improvised by really imaginative kids who have a great sense of humor. Souped-up cars, exotic animals, a jailbreak fantasy and a sense of turning scary things into funny things just add to the kid appeal.

Australian author Aaron Blabey has written several well-loved series of children's books, including the 11 "Bad Guys" graphic novels, of which this is the first. At the rate one gets through this book, the whole series shouldn't take long to read – with loads of fun and an emphasis on visuals that should make it a hit even with reluctant readers. Blabey is also an award-winning TV actor and is developing film versions of his books, which also include Pig the Pug and Thelma the Unicorn. The next title in this series is The Bad Guys in Mission Unpluckable.
Posted by RobbieFish at 10:13 AM