Resuming our pull through TLH with Hymn 282, I don't find much to comment on in the "Type 1" category. Just a few hints about noteworthy text and tune variants: 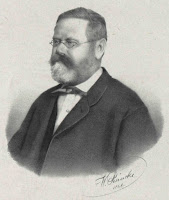 (283) God's Word is our great heritage (one stanza by N.F.S. Gruntvig, set to Fritz Reuter's 1916 tune REUTER) is the hymn I've mentioned before, in a story about a Bible class that was torn between closing with this hymn or the same text set to the isometric version of EIN FESTE BURG, as the Lutheran Hymnary has it. Fun times.

(287) That man a godly life might live is Martin Luther's catechetical hymn paraphrase of the 10 Commandments. Besides the fact that every Lutheran should learn it, know it and love it – I've known at least one family whose kids all learned it by heart and sang it regularly during family devotions – it's worth mentioning, first, because the tune (which TLH names after Luther's hymn, DIES SIND DIE HEILGEN) is known, in other hymnals, as IN GOTTES NAMEN FAHREN WIR. And second, the same text appears in other hymnals by a variety of other names, owing to the first line of the translation being a bone of contention. In LW 331 it's "Here is the tenfold sure command," which seems closer to the original. In LSB 581 (whose lengthy list of translation credits includes one of my seminary classmates for stanza 1) it's "These are the holy Ten Commands." ELHy 488 (a composite translation) begins "I am, alone, your God and Lord." The hymnal's own translation, ELHy 490, also begins "These are the holy Ten Commands" – though it predates LSB by a decade. I'm not going to dig further on this. Whatever Lutheran hymn-book you have, I suggest opening to the text index and looking for either DIES SIND DIE HEILGEN or IN GOTTES NAMEN and follow where that leads.

(292) Lord Jesus Christ, with us abide, partly written by Formula of Concord co-author Nikolaus Selnecker (1611), is set to the 16th century chorale ACH BLEIB BEI UNS (thus, actually older than the hymn it's named after). It's a gorgeous, important hymn and its use, even on Sunday morning, shouldn't be hampered by the words "round us falls the eventide," in the second line of stanza 1. This is because, for one thing, the hymn is referencing the story of the risen Lord's appearance to the Emmaus disciples; and for another, the hour is (increasingly) late on a level that matters to the faithful more than the position of the sun in the sky at any particular moment. A great confession of faith in God's Word (and Sacrament; see stanza 2), and just a movingly beautiful piece, it should be a regular part of your congregation's repertoire.

(295) The Law of God is good and wise and (297) The Gospel shows the Father's grace are a matched pair of hymns by American Lutheran hymn writer and translator Matthias Loy (1863). These aren't the only examples in TLH of the work of this now underrated hymn writer, but I think if you read them together, you'll be open to considering the opinion of one of my most respected friends: that "Matthias Loy" is the correct answer to "Who is the best Lutheran hymn writer in the English language?" 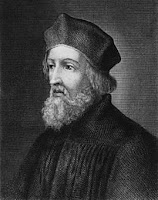 (311) Jesus Christ, our blessed Savior, a Communion hymn by pre-Reformation Czech reformer Jan Hus (or, as TLH spells it, John Huss), is set in TLH to the 1533 Wittenberg tune JESUS CHRISTUS, UNSER HEILAND. There is also an alternate tune by the same name, dating from 1524 Erfurt. In LW 236-237, the editors of Lutheran Worship took the remarkable step of putting both tunes together on facing pages, dividing the stanzas of Hus's hymn between them (odd on the left, even on the right) so that you can sing both tunes in alternation. I love this. I think it's a shame the editors of LSB pulled back to just using the 1533 tune. In my opinion, this is one of a good number of examples of the hype for LSB (i.e., fixing what's broken with LW and repristinating TLH a bit more) being off the mark; in this instance, the "new new" hymnal rolled back a change the "old new" hymnal made, that was actually a good change.

(315) I come, O Savior, to Thy Table is only a cento of F.C. Heyder's Communion hymn – but it's 15 stanzas spread across two pages! What gets my nose out of joint is how LSB 618-619 (for example) chops this hymn into two separate hymns, again on facing pages, with the music on both sides so that only five stanzas fit on each page – meaning LSB retains only 10 of the 15 stanzas TLH managed to fit in about the same space. I can't see the angle in doing this. If the problem is that the hymn is too long, you don't have to sing all the stanzas. If it's that you want to single out particular stanzas later in the hymn, you can just select those. If you want to break up the song into multiple sings, you can do that by simply designating what stanzas to do at what time. None of these problems require the solution LSB came up with, which (in my opinion) is not only a sinful waste of space but also deprives congregations where Communion actually takes long enough to sing all 15 stanzas, with instrumental interludes and all, of the opportunity to do so.

(316) O living Bread from heaven, from a longer Communion hymn by Johann Rist, is set in TLH to the 16th century chorale NUN LOB, MEIN SEEL. Interestingly, LW 244 and LSB 641 squeezed this hymn into the metrically tighter form of Michael Praetorius's tune ACH GOTT VOM HIMMELREICHE. This necessitated deleting a couple of syllables per line from several lines of Catherine Winkworth's translation. I actually think this change improves the hymn. Noticing this is one of the things that stimulated me to start noticing unnecessary prolixity in my own hymn writing and that of others. Speech is silver; concision is platinum.

(329) From depths of woe I cry to Thee, Martin Luther's penitential paraphrase of Psalm 130, set to the 1524 chorale AUS TIEFER NOT, deserves mention for three reasons: (1) It's an essential hymn for believers who are conscious of their sin and need for God's grace. (2) Any translation that fails, in the first line of stanza 1, to take advantage of the original German's text-tune painting of the word "tief" (deep or some equivalent), synchronized with a plunging melodic interval, should be wadded up and shot out of a spitball cannon. TLH does it right. (3) Be aware that in many hymnals, the tune that TLH designates as HERR, WIE DU WILLST is also called AUS TIEFER NOT. It's a great tune, but the tune to this hymn it is not.

(345) Jesus, Lover of my soul is a hymn by Charles Wesley (1740) that TLH sets to Simeon B. Marsh's bland, pedestrian tune MARTYN (1834). With all due respect to the mild-mannered merits of Wesley's hymn, I really think it fares better with Joseph Parry's tune ABERYSTWYTH (LW 508, ELHy 209).

(347) Jesus, priceless Treasure, a hymn by Johann Franck (1655), seems to me to be forever welded to Johann Crueger's 1649 tune JESU, MEINE FREUDE – though, again, that's weird because the tune predates the hymn it takes its title from. J.S. Bach did a lot to cement that text-tune marriage (if you'll forgive my atrociously mixed metaphors), what with his chorale motet on the hymn, a live performance of which I've actually had the honor to participate in. Nevertheless, the moment LHy 351 introduced me to Ludvig Mathias Lindeman's (1812-87) alternate tune, GUD SKAL ALTING MAGE, I fell right in love with it and I'd be totally down with singing the hymn to either tune. I guess that makes me guilty of suborning hymnological bigamy. ELHy (hymns 263-264) is with me on this.

(349) Jesus, Thy boundless love to me, from Paul Gerhardt (1653) by way of John Wesley (1739), is another hymn that I think is just great when set to the superb 16th century chorale VATER UNSER. However, LSB 683 sets it to Norman Cocker's 20th century tune RYBURN, and I'm not complaining. It's one case, at least, where LSB traded in a chorale for a modern hymn tune and I don't feel like bitching about it. I guess, in this case, I'm not worried because VATER UNSER has Luther's hymn paraphrase of the Lord's Prayer to fall back on.

(350) Jesus, the very thought of Thee is a lovely hymn based on a 12th century Latin text that, I guess, is sometimes attributed to Bernard of Clairvaux. TLH isn't quite alone in setting it to Herman A. Polack's nice but forgettable 1910 tune CLAIRVAUX (so do ELHb and ELHy), but I can name at least five hymnals that opt instead for the better known, though perhaps even more saccharine, ST. AGNES by John B. Dykes. My favorite tune of those I've found paired with this hymn is Bartholomaeus Gesius' 17th century tune HERRNHUT (cf. The Concordia Hymnal 101). I also fondly recall singing in a choir that did a beautiful, free-flowing, chant-like Richard Proulx setting of this hymn.

(351) Love divine, all loves excelling is a Charles Wesley hymn that I'm not too hot about. But again, I think subsequent hymnals did it a service by changing tunes on it. TLH sets it to the bland, 18th century tune O DU LIEBE MEINER LIEBE, while at least LW 286 and LSB 700 set it to the more fun-to-sing 19th century tune HYFRYDOL by Rowland H. Prichard.

Again, it's an awkward place to stop, but some awkward hymns are coming up and I feel a need to prepare myself mentally for them.
Posted by RobbieFish at 12:09 PM