The Year (or So) of Star Trek

What a year it is – or couple of years – to be a fan of the Star Trek franchise. Between early 2020 and sometime in 2021, there have been or will be five different Trek series airing in first-run broadcast (or streaming service, at least) between CBS All Access and Nickelodeon TV. Plus, there are still struggling hopes of a fourth "Kelvan timeline" original-series reboot movie being made (with rumors that the series is permanently canceled alternating on a daily basis with a director saying he still hopes to shoot it), and even some writer-director or other trying to pitch a Trek feature film headlined by an entirely new cast of characters.

But let's not lose the pie in the sky. The following series are actually confirmed to be happening between now and sometime in 2021: a third season of Star Trek: Discovery, a second season of Star Trek: Picard, a second season of the half-hour animated comedy series Star Trek: Lower Decks (whose first season I have yet to see), the new Star Trek: Strange New Worlds featuring Capt. Pike and Spock as seen in Discovery season 2, and now (just announced) a children's animated series Star Trek: Prodigy in which Kate Mulgrew is already taping a voice performance as Capt. Janeway, late of Voyager. What a time to be alive, eh, nerds?

Here are my reviews of starship-based TV series, dating back to when I did episode-by-episode commentary: 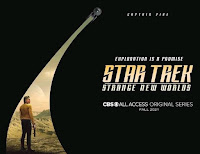 And here are my starship-type show reviews since I went all "Three Episodes That Made the Box Set For Me": Like the 1970s Star Trek animated series, I tried to watch Earth: Final Conflict and Alien Nation, but gave up in disgust after only a couple episodes. It was a thing I did; I would buy a season of a TV show on DVD at my neighborhood FYE store and if I hated it so much I couldn't stand watching it any more, I sold it back as used and bought something else. Other shows I remember giving up on in mid-season were Supernatural (when I lost all sympathy for the characters a couple-three-four seasons in), Forever Knight and Buffy the Vampire Slayer (neither of which aged well). So, whether it's starship based or not, if I start to think it's crap, I don't watch any further.

Meanwhile, shows like Lost in Space and Troll Hunters simply tick me off because I can only get the first season on DVD, though there seems to be no good reason for the subsequent season(s) not to be released on disc. I will totally review Season 2 of both series (etc., etc.) as soon as home media shakes loose from the studios' tight fists. Don't give me that song and dance about DVD being a dying medium, studio execs. You're killing it by not releasing shows on it when that's what their fans want, just so you can sell more subscriptions to your streaming service – a medium for watching TV that takes the maximum poundage of flesh out of the viewer and, in my opinion, asks a few pounds too much.

Just this week, I finally got a chance to bring home Picard on DVD, binge-watching it the same day (Oct. 6) it was released. I'll hold off on reviewing it for now. I just wanted to vent my verklemptness and, since I've run out of stuff to say that you can't look up for yourself on IMDB or Wikipedia, to leave any further comment until I've seen the new shows myself. Live long and prosper, Trekkies! (or -ers, if you prefer)

Posted by RobbieFish at 5:08 PM