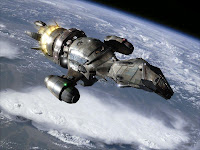 For a few years, I have been ignoring videos of Joss Whedon's Fox series Firefly and its spinoff feature-film Serenity. Not that I have anything against his work, I simply have never followed his shows, including Buffy the Vampire Slayer (1997-2003), Angel (1999-2004), and Dollhouse (2009-10). When I hear the words "Buffy the Vampire Slayer," my mind still goes to the hilarious 1992 film starring Kristy Swanson--a film truly of my generation, since I graduated from high school in 1991. And when I hear the name "David Boreanaz," I am immediately reminded of one of the reasons I can't stand the show Bones. I have only been dimly aware of these other series, even before I quit watching TV on a regular basis; I remember, for example, that Armin Shimerman played the principal of Buffy's high school at the same time he was playing Quark on Star Trek: Deep Space Nine. But one day when I had nothing better to do, I finally decided to buy the 4-DVD set of Firefly, the complete series.

And now, dear reader, I am Joss Whedon's slave. 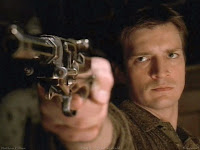 The tragedy that today wrings my heart is that Firefly only lasted 11 episodes on the Fox network, including the pilot. In spite of an instantaneous, fanatically devoted fan base, the series was canceled due to low ratings for which I reckon the network was mostly to blame, because they clearly didn't understand the show. Originally airing between September and December 2002 (the very year I gave up on-air TV), this show finally notched 14 episodes in its belt thanks to contractual commitments to overseas markets and Fox Home Video. But it is heartbreakingly incomplete, such a wonderful story cut so cruelly short. I'm not the only one who thinks so. A lot of fans hope (probably in vain, due to the economics of the situation) that the show will come back somehow, someday. Even the cast and crew agree that it's the best thing they ever worked on. But, alas, fans will have to content themselves with 14 perfect episodes, plus a Hugo Award-winning movie that I still haven't seen (and which was also, fatefully, a critically-acclaimed box-office failure). 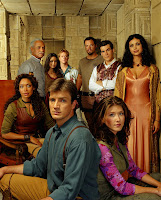 Firefly is a sci-fi western. I'm not sure what century it's supposed to take place in, but it's far enough in the future that no one remembers where "the Earth that was" was. Mankind has spread out across the galaxy, settling on numerous planets ranging from the highly developed "core" worlds to the wild frontier of the "outer rim." Since the last two surviving superpowers were China and the USA, everyone speaks English and swears in Chinese. (The captions just say "[Speaking in Chinese]," darn it.) There aren't any aliens. But there is plenty of conflict. Conflict between free spirits and the fascist Alliance that holds all known worlds in its totalitarian grip. Conflict between different gangs of criminals. Conflict with the Reavers, a band of space pirates who slice, dice, and julienne anyone whose ships can't outrun them. And of course, conflicting points of view between nine main characters whom creator Whedon described as "nine people looking into the blackness of space and seeing nine different things." (Wiki has "blackness," but when I watched the DVD special features I could swear I heard "blankness.")

The title Firefly is a reference to the hero ship, a Firefly-class cargo transport named Serenity, after the battle in which the two top-billed characters fought. Serenity Valley was the resistance's last stand against the victorious Alliance. Once a sergeant in the anti-Alliance forces, now Captain Malcolm "Mal" Reynolds owns and commands the Firefly as a commercial ship, carrying cargo and passengers for a fare, renting out the ship's two shuttles when he can, and mostly getting by on robbery, theft, and smuggling. Mal was played by Nathan Fillion, who currently stars on the crime series Castle (which I have also enjoyed on video). 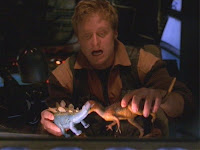 His second-in-command is his former corporal, a tough chick named Zoe, played by SF/fantasy maven Gina Torres. Zoe is married to "Wash" Washburn, Serenity's pilot and navigator, played by witty character-actor Alan Tudyk. Providing additional muscle is the studly Adam Baldwin as improbably-named mercenary Jayne Cobb, a big lummox of a hired gun who will turn on his crewmates if the price is right. The ship's mechanic is a sweet, honest, down-to-earth country girl named Kaylee, who also happens to be a genius at making engines work; she is played by Jewel Staite, who also starred in the later seasons of Stargate Atlantis.

Rounding out the ship's crew is Simon Tam, who volunteers his services as the ship's doctor in return for passage and protection for himself and his deeply disturbed sister River (Summer Glau of Terminator: The Sarah Connor Chronicles). The two are fugitives from the Alliance since Simon sprang his sister from a laboratory where the government was doing mysterious experiments on her. River has psychic powers but doesn't know how to deal with them, and sometimes she is a danger to herself and/or others. To protect her, her brother has given up a promising career in medicine. The two bring an extra helping of trouble and danger to Serenity and her crew, but just when the others are questioning whether they are worth it, they suddenly become invaluable. 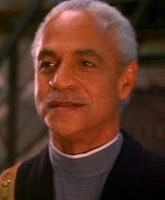 The remaining passengers include Inara (played by Morena Baccarin, late of V), a "Companion," or high-class, trained, guild-licensed courtesan, who rents one of the shuttles to entertain her clients whenever the ship touches down on a civilized world; and Shepherd Book (played by Ron Glass of Barney Miller), a celibate Christian clergyman who seems to be something between a missionary priest and a friar. Perhaps you can just begin to imagine the friction between these characters' different worldviews. There's sexual tension between the captain and the courtesan, who call each other "whore" and "petty thief" but secretly are in love with each other. There's the tease of romance between Simon and Kaylee, though he always says the wrong thing just when she is an inch away from kissing him. There's Wash's jealousy of the old-war-buddy relationship between Mal and Zoe. There's Jayne, whose boorishness, brutality, and lack of intelligence make him alternately scary and funny, and set him in conflict with everyone else. And there's Shepherd Book, a true believer who brings kindness, toughness, and fatherly concern on his mission, though there is some mystery about him as well.

The series starts with a two-hour pilot episode titled Serenity. It lays out the background of Mal & Zoe's involvement in the Battle of Serenity Valley, and jumps to the "present-day" action where they stop at the planet Persephone and pick up a whole lot of trouble--including new passengers Book, Simon, Rain, and a fourth guy who turns out to be an undercover Alliance agent fixin' to catch the Tams. In The Train Job the Serenities accept a job offer from a vicious crime lord, only to find out that the package they are supposed to steal was medicine desperately needed by a struggling colony. Gregg Henry guest stars as the sheriff of the colony. In Bushwhacked the Serenities find themselves caught between an Alliance cruiser's (fortunately green) commander and the lone survivor of a Reaver attack, who goes ape-caca just when the crew needs every possible break to get away with their smuggling and Tam-hiding activities. In Shindig, guest-starring Larry Drake and Mark Sheppard, Mal picks a duel with an expert swordsman who wants Inara to become his consort.

In Safe, Zac Efron appears as a young Simon in flashbacks to the Tam siblings' childhood, while in the present the two are left at the mercy of superstitious villagers who have kidnapped them because they need a doctor. Christina Hendricks guest-stars as Our Mrs. Reynolds, a girl from a backwater planet who gets hitched to Mal without his realizing it. Only, she turns out to be a con-woman with deadly plans for Serenity and its crew. In Jaynestown, Gregory Itzin plays a local mud tycoon who hires Inara to make a man of his son. His plan backfires when the son helps the Serenities get away from a village where Jayne has inadvertently become a folk hero to the local indentured workers. Out of Gas presents flashbacks to the beginnings of Serenity's career as a home for misfits and fugitives, within the framework of a story in which Mal races to fix his ship before he runs out of air. Ariel is the core world where Simon proposes that the Serenities break into a hospital so that he can run tests on River to find out what the Alliance butchers did to her. As payment for their services, he offers to help them steal a boatload of valuable medicines. What they don't count on is Jayne selling them out, setting up one of the series's most exciting battle-and-chase sequences. 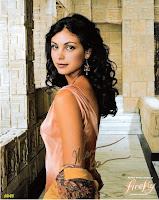 In War Stories, Wash demands a shot at field work with Mal, revealing his suspicion of Zoe's relationship with their boss. Unfortunately the two guys end up being tortured together when Niska (whom they double-crossed back in "The Train Job") catches up with them. In Trash, Mal's sometime wife, sometime enemy (see "Hitched") talks the Serenities into helping her steal an "Earth-That-Was" artifact, using a garbage chute as a means to elude high-tech security. Only, Saffron doesn't mention that the victim of the crime is one of her previous "husbands." The Message, guest-starring Richard Burgi, comes to Mal and Zoe in the form of the dead body of one of their old war buddies. But then Tracey turns out to be only "mostly dead," and on the run from crooked law-men who were using him as a mule to smuggle designer organs. It's a really wistful episode, featuring a likeable character who destroys himself by making all the wrong decisions. Melinda Clarke and Fredric Lane guest-star in Heart of Gold, in which the Serenities defend a brothel from a local strong-man who means to use one of the whores to incubate his heir. And in Objects in Space, the final episode of the series, Richard Brooks (late of Law & Order) plays bounty hunter Jubal Early, who infiltrates the ship in an attempt to capture River and collect the reward. In spite of River's apparent uselessness and aptness to harm herself and/or others, she turns the tables on Early after he incapacitates everyone else--ending the series on a most satisfying note. Except for the fact that it was really just beginning...

And from that day, we stopped watching the Fox Network. Curse their sudden but inevitable betrayal! *shaking fist*

Barbara, I just looked at your blog & your book THE ELF QUEEN interests me. Also, would you consider being interviewed on my blog? With your perspective & range of interests, I think it could be an interesting conversation.

I'm glad someone else feels the same as I do! I want to know more about Firefly, but I'm afraid that it will probably never again be on television. Poor Joss Whedon! He's a genius! But apparently no one told Fox!