I continue my run-through of the song selections in Let All the People Praise You: A Songbook (Northwestern Publishing House, 1999), the first of two supplements published in the Wisconsin Ev. Luth. Synod to its 1993 pew hymnal Christian Worship: A Lutheran Hymnal. See the previous post on this thread for more background and, of course, this thread in general to understand such critical vocabulary as "Grandma Smurf" and "Shepherd of the Cornfield Lutheran Church," as well as what I mean about a hymn being tacky in the context of public worship in an American Lutheran parish. Looking back over my previous posts, I realize that some people have taken offense at my critiques, but I don't believe I have given just cause for offense.

In my snarky, tongue-in-cheek, fun-finding way I am frankly and honestly addressing issues that I think are important for the formation, identity and spiritual wellbeing of Lutheran believers and congregations. And except perhaps for a couple times when I was stirred to a passion, I don't think I've sinned in the way I expressed myself. But people will feel what they feel, and on this topic perhaps more than many others, they can be hard to reason with, let alone kid with. So, before I proceed further, I'll repeat again that I love Lutheran hymnody and hold the best interests of Lutheranism at heart. But what I mean by Lutheran hymnody and Lutheranism is clearly not where everyone's at. I think what's in the congregation's pew book should be designed for the congregation to sing, consistent with its confession of faith and rich in the gospel's proclamation, instruction, edification and comfort. If I seem hell-bent on slaughtering sacred cows, perhaps it's because I think somebody needs to fight against the introduction or transmission of hymns that fall down halfway, or less, to that target – whether they're clever new creations or sentimental old chestnuts.

And to answer, once again, another question frequently demanded of me – why I think I'm qualified to speak of these things – I may not currently be on the clergy roster of a Lutheran church body, but I was ordained as an LCMS minister after following the full M.Div. route to the ministry. Prior to that, I earned a bachelor's degree in music. I'm a professional writer (full disclosure: newspaper reporter) and have been writing poetry and composing music, much of it oriented toward hymnody, for going on three decades. I've sung them, played them on the piano and organ, directed them and arranged them for choir, and accompanied worship. I've studied tons of hymnals and supplements with special attention to hymn texts and tunes. I've written a lot of hymns, words and music, and though I don't think my efforts in that area are perfect, I think I've improved a lot from where I started.

So, excuse me please, but I believe I have a right to an opinion about this subject – some knowledge of the mechanics of writing hymns, some taste regarding their style, some theological discernment regarding their message, some historical perspective and some practical experience relevant to the forces best applied to their successful performance. This is not an "I don't know much about art but I know what I like." This is an evaluation of what the hymns chosen for use in Lutheran worship reveal (or fail to reveal) about the judgment, good or bad, that went into choosing them.

And so, we return to my lippy review of LAPPY. As always, I welcome dissent and/or correction if I get anything wrong. Leave a well-behaved comment if you like.

(Pages 52-53) Come, praise the Lord is a cute little piece by Larry Mayfield, paraphrasing Psalm 134, with an optional second line of melody creating an echo effect, that the score says to sing on the repeat. Face it, though, it's a piece for the youth choir.

(54-55) The Coventry Carol (first line: "Lully lullay, though little tiny child") is an English traditional song with verses dramatizing the slaughter of the innocents (including one stanza added by WELS pastor Mark Jeske). Culturally, it's a lovely little artifact and would be a fine addition to a nativity play. But for some of the same reasons I think singing the supposed sentiments of Mary Magdalene at the tomb of the risen Jesus makes "In the Garden" an awkward part for the congregation to play, I have doubts about this song's fitness for public worship. 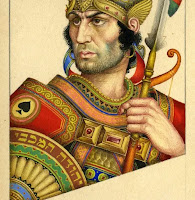 (56-57) Daughter of Zion (shout for joy) is an Advent/Palm Sunday hymn translated from German, sung to the tune JUDAS MACCABEUS by G.F. Handel which, in my opinion, is one of the clearest examples of my principle that pieces of classical music (like this arrangement of a chorus from a sacred oratorio) are best left alone and not co-opted as hymn tunes. As long as the original piece remains well known, I think the hymn suffers from association with it; if and when the pendulum swings the other way, I think it's bad for the original piece. The icing on top is that the music really requires either above-average skill or rehearsal to sing, particularly with melismas (multiple notes sung over the same syllable) in every single phrase.

(58) is just the original German of the Christmas carol "Silent night" (without music), about which I've expressed myself forcefully enough in the past. I remember when there were still old folks in my home congregation who were confirmed in German and remembered when the parish worshiped in German. The ability to look up a song like this and sing it to them in the language in which they first learned it was a nice way to touch their hearts at Christmastime. All these years later, I wonder how many of those people we still have, and whether continuing to pull out German carols has any effect in the American context other than re-enacting history. It's also worth noting that this page includes both versions of the "original" German for stanza 1 – one of which, my theory goes, may be the product of a reverse translation from English to German.

(59) Deep River (my home is over Jordan) is a spiritual that I never personally sang until that time I was in the St. Louis Symphony Chorus and we did Michael Tippett's A Child of Our Time. I seem to recall there being more stanzas than Jeske includes in his arrangement. It's a nice number, but you'd have to repeat it to the point of tediousness to get more than a brief impression from it and, for all that, I think it's more the domain of a soloist or rehearsed ensemble than the congregation.

(60-61) Didn't my Lord deliver Daniel is another spiritual, this time with five stanzas in addition to the refrain. There's a certain irregularity to the rhythm of the stanzas, and the song cries out to be sung in harmony, so again, I think it will belong to a rehearsed group, possibly with a soloist. Besides that – which, again, raises the question why this song should be in a songbook in the pews – I have two concerns, neither of them very grave by itself, but telling when taken together. First, this is music that's not going to sound its best sung by the musical forces of a typical American (or German-American or Scandinavian-American) Lutheran church. If you're a connoisseur of this style of art, you'll find they do it better at First AME Church or Second Baptist. Secondly, and I think more seriously, the text doesn't give you what I think Lutherans should expect a hymn to give them. It's very poetic and makes a sound argument, but I think it comes across as an art work first and as a hymn only in a distant second place.

(62) Do, Lord (remember me) is another spiritual that Jeske alters somewhat out of semblance to the song I remember. Also, it's the type of song that doesn't have very much to say, and nevertheless takes full advantage of four ordinary-length stanzas to say it, and say it, and say it again. There's got to be better uses for the group singing portion of the worship hour.

(63-66) El Shaddai, I've done before. Briefly again, this is a solo song. And it takes up three pages plus part of a fourth.

(66-67) Eternal Light (shine in my heart) has words by Christopher Idle from a prayer by Alcuin (of York, presumably) and a nice modern tune by Jane Marshall. The only faults I find in it are the periods at the end of stanzas 1 and 2, which I think should be semicolons in keeping with the argument of the piece. It's really quite beautiful. What I said in my previous post about David Hurd's tune MIGHTY SAVIOR might also apply to JACOB, however. I would enjoy the challenge of trying to teach this to the kind of congregation that has a good attitude about that kind of thing. But I wonder: Is that kind of congregation going to have this book in its pews?

(70) is only the Spanish translation of "Jesus loves me," without music. So, it's pretty much space filler, nicer to look at but little more useful than a row of small caps saying, "This page has been left blank to facilitate page turning."

(71-73) The First Song of Isaiah (first line: "Surely, it is God who saves me") is adapted from Jack Noble White's setting of Isaiah 12. It's really more of a through-composed canticle; I've heard another version, with different music as well as a different translation of the text. It's going to take some work teaching it to the congregation – unless the choir grabs it and won't let go. I know, it's strange to find me not coming up with a snarky comment about a piece – other than, best of luck making it work!

(74-75) For since Christ's feet (in ancient times) is the beloved hymn, often mentioned by the name of its tune – JERUSALEM by C. Hubert H. Parry – that, I've been told, many subjects of the United Kingdom wish was their national anthem. An enterprising trio of writers exerted themselves considerably to rewrite the patriotic English lines as an actual Christian hymn. It's terribly clever, unless you're one of those people who wanted the original as your national anthem, in which case (on behalf of Lutheranism) I'm so very, very sorry. While we're at it, why don't we baptize "I vow to thee, my country" and stick THAXTED in the book?

Well, that's me starting to get grouchy, so I'd better quit for the night.
Posted by RobbieFish at 1:54 AM