Movies So Bad They Piss Me Off

Today I'm going to discuss four movies that were so bad that just thinking about them is enough to get me angry – and I only actually watched three of them. 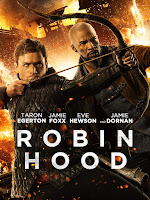 I'm going to start with the one I didn't see, so I can move quickly past the explanation for why I know it's so bad that it pisses me off without having actually seen it. That movie is the 2018 version of Robin Hood staring Taron Egerton and Jamie Foxx. The reason I hate it with a visceral loathing is that I know it shares a common descent with a movie I bought on DVD called King Arthur: Legend of the Sword, made in 2017 with Charlie Hunnam in the lead role and Jude Law as the heavy. They were both made by people who have as much as said out loud that they have no respect for the source material, and that shows in the films they made to the extent that only the titles and the names of some characters resemble the legends they're based on.

I think so little of these films and the people behind them that I don't consider it worthwhile to dig up the actual references, but I assure you that I have seen videos and read articles stating the point of view behind these reboots of folklore from the ancient heart of English-speaking culture (and wider Western European culture for that matter). Namely, they don't have anything to say to people today; they're boring and irrelevant and have to be fundamentally re-imagined before a present-day movie about them is going to score at the box office. I submit that if these people really believe that, they should leave these legends alone, not bother to re-imagine anything and just start from fresh material; and also that, by holding that opinion, they are the last people in the world who should try to make movies about Robin Hood or King Arthur. Their labors are wasted, and the results are an insult to lovers of the romance at the heart of our culture.

To say that I didn't actually see the Robin Hood film means nothing. I saw the horrid King Arthur movie, and that's more than enough. I know the Egerton/Foxx Robin Hood movie was built on the same basic platform – spirit, attitude, whatever – and that calling it shit would be a slander on feces. To make the romance of King Arthur work for today's audiences, the filmmakers decided to cast Arthur as a gangster/pimp who was brought up from childhood in a brothel and who uses kung fu to enforce his criminal enterprises. The whole "sword in the stone" thing is a trap designed by his nemesis, Vortigern, who apparently murdered Arthur's parents when he was a baby and has the ability to transform into a monster out of the fantasy-horror genre. Other than the fact that Bedivere is a Moor and Merlin is a girl (I really don't care at this point) the movie wastes the talents of Eric Bana, Djimon Honsou, Aidan Gillen (who, I take it, has a risque history of costarring with Charlie Hunnam) and many more. David Beckham is even in it.

The movie is directed by Guy Ritchie, who shares writing credit on it with Joby Harold, Lionel Wigram and David Dobkin. I mention these people only so that I can say that if there is any justice in the world of art and entertainment, none of these men will ever be allowed to make another movie to afflict us.

Then there is I Kill Giants, a movie I picked out of the lowest-price-point DVD bargain bin at Walmart and that nevertheless left me feeling cheated. Zoe Saldana (Uhura in the original-Star Trek reboot trilogy) and Noel Clarke (Mickey in the first few seasons of modern-day Doctor Who) have roles in it. It's based on a graphic novel by Joe Kelly and Ken Niimura, directed by some Danish guy, produced by Chris Columbus (among others), and it's completely awful, delivering on zero of the promises suggested by its title, cover art, poster, trailer, etc.

The main character is an obnoxious twit who lacks any attractive or sympathetic qualities. What's actually going on in the story is insulting to the viewer and doesn't do much credit to the young heroine, either. What are these giants that she kills? Is there any real component to her bizarre behavior, which includes wearing a pair of bunny ears that you'll want to slap off her head by the end? You'll grow to suspect it's something between paranoid delusions and a coping mechanism for – I won't ask for your forgiveness, you'll thank me for spoiling it – her mother's cancer diagnosis.

What you actually see happening on screen isn't at all fun to watch, and what it turns out to mean in cold reality proves to be more disappointing than you can possibly be prepared for. The story line's final resolution is tied up so easily that it's like a slap in the face, or maybe a kick aimed somewhat lower. By then, you've lost any investment in it and are just watching (if at all) the way one watches a train wreck. Only, I rather fancy that a train wreck would have a more satisfying ending. Again, the more notice the world takes of this movie, the more film careers it will effectively destroy. In that regard, more power to it.

Finally, I'm going to bring up a police procedural called Blitz, starring Paddy Considine and Jason Statham as a pair of unlikely buddy cops (one of them, apparently, is gay – although you can't really tell apart from the politically incorrect epithets his partner levels at him). It also has Aidan Gillen in it, playing a killer who I wish would keep his clothes on a bit more. The concept of the movie seems to be something about a cop killer going up against a killer cop. The movie definitely does wink at some serious police misconduct.

But other than what I've already stated, what mainly ticks me off about it is that it's the premier example of a DVD failing to fulfill the promises made when the format was introduced. Chiefly, I'm pissed because there was no DVD menu option to watch this movie with subtitles, which would have been helpful because the dialect of English spoken in this movie is nigh unto incomprehensible to poor little, slightly hard of hearing, middle American me. Even at Walmart cheapo bin prices, we should have the right to expect better.

On the other hand, I'll give the movie credit for this much: Seeing Jason Statham genuinely smile was a real novelty. He should do it more often.
Posted by RobbieFish at 10:09 AM