I've been tentatively exploring the idea of jumping on the current style bandwagon – the face mask. It's never been a more mainstream fashion choice. Here are the options I've tried so far, and why I'm having difficulty adjusting to them. 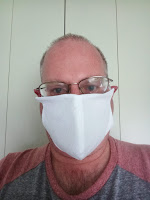 First, this homemade mask was gifted to me by a local organization whose donation of 100 (well, 99) face masks to the local hospital I was writing up for the newspaper. While I appreciate their generosity, I have to admit that the material isn't very breathable, and it rides just a bit high across my sight line, and it fits so snugly – especially where the elastic loops around my ears – that I feel like my ears are being pulled out of shape and, if I wear it too often, I'll end up looking like I wrestled in college. On the plus side, it's form-fitted to the lower half of my face, so it would probably keep virus-bearing particles of icky body fluids in and protect the people close(ish) to me. However, it causes my glasses to steam up, whether I wear them over or under. 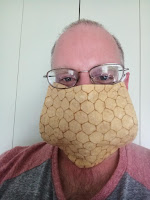 Next, the company I work for sent masks like this (only in different fabric patterns) to employees who signed up for them. It's very attractive and, I suppose, in a way, comfortable. It's sort of a quilt square, with backing in a contrasting fabric and the tie-down cord running through a hem on one side, looping around and running through another hem opposite, and knotted at both ends so it doesn't completely fall out.

It took me a while to figure out which way around I was supposed to wear it. My best guess was with the loop going over the top of my head and tucked behind my ears, and the loose ends tied together at the back of my head where, due to the size of my head, they are barely long enough to tie a sad sort of bow. I'll admit, it's attractive. However, there's no elastic and it's not form-fitting, so as the open sides kind of bag out, it probably doesn't protect anybody from anything. If you can tell me a better way to tie this around my face, please speak up in the comments. However, I've already tried it flipped around with the loop going around my neck and the loose ends at the top, tied at the back of my head – and it still bags out at the sides, just the same. 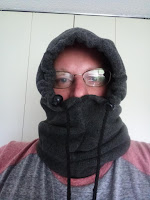 Then, there's this balaclava that I have, and which I've only ever needed to wear a couple of times when I had an all-day newspaper assignment covering an outdoor winter sports event (like, say, a snowmobile race or an ice fishing derby). I'm sure it's wonderful in bitterly cold weather, but this isn't really the time of year for it. Once I get it past the thick circumference of my head and my stick-out ears, it's probably easier to put on than tying a scarf around my neck. Yet somehow, I generally prefer scarves. Relevant to the face mask issue, I can pull back the hood so it looks more like this: 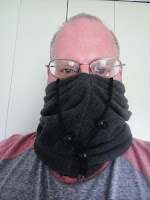 But apart from the fact that I look like I'm fixin' to rob a stagecoach, by the time this COVID-19 crap is over, I'll be cruising for a case of heat stroke. It isn't an elastic article, either. Just fleecy, with a drawstring around the face hole that makes me look especially goofy and, also, has little plastic toggles for adjusting the amount of slack in the drawstring that bang against my face at lip level every time I move my head. Also, it's so snug that, pulled up over my nose, it presses against my nose and mouth in a way that makes me feel like I'm being smothered. It doesn't quite stop my airway, but it does make it challenging to speak clearly and leaves me with the sense that, after a few trips out in it, I'll have that permanent Voldemort look.

Nevertheless, the balaclava inspired me to go looking for another option, like the kind of stretchy nylon balaclava that motorcyclists wear. I went to the one place in town that I reckoned would deal in such things – the fleet store – and sure enough, they had a box of them on a shelf in the motorsports helmet and accessories aisle. The box, however, was empty. In another aisle, connected with I forget what types of products, I did find a similar line of products – elastic tubes in a variety of prints that you can pull over your head and use either as a scarf, a balaclava or a face mask. This, in fact: 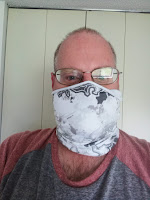 I know, the print isn't the best. However, the alternatives included pink camo, a pattern of wild turkeys or a psychedelic flower pattern. So, maybe it is the best, after all. It cost me a whole $18. All right, $17.99, but let's not quibble. It's as snug as the fleece balaclava, but it has a lot more give in it due to the stretchy elastic fabric. It's lighter and a bit more breathable. A little tricky to pull on and off (my ears really don't like rough handling). I'd give it the win, except for two things. First, like the one they gave me at the hospital, it tends to make my glasses steam up, especially when I breathe through my nose. Second, there's this tag attached to it, and I'm a bit conflicted about where it should go. Not front and center, I shouldn't think: 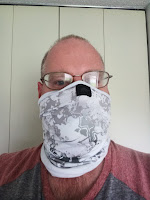 No. Oh, no, no, no. But that means I now have to look for a tag before pulling this snug elastic tube over my head, while trying not to panic when I get lost inside or have a fit about the way it treats my ears. Have I ever told you about the time I never went back to a barbershop because the girl who cut my hair handled my ears with disrespect? I'm serious about this. But this might be my best option until someone anonymously slips one of those pleated numbers with elastic backing under my door. Like, shrink-wrapped.
Posted by RobbieFish at 2:55 PM