I went to the Symphony tonight and heard Mahler's Sixth conducted by Semyon Bychkov in the second weekend of his two-week St. Louis debut. It's a tremendous work which I had previously heard only on recording--two recordings conducted by Leonard Bernstein, in fact. And though one of those Bernstein disks is a video DVD, it really makes a difference to be there when the music happens--to be part of the space it happens in. For one thing, the music involves a "seismic event" which can almost be felt from the nosebleed seats, where I was situated.

Written in 1903-04 during a happy period in the composer's life, and premiered in 1906--a year before Mahler's life turned really tragic--it is an inexplicably tragic work by an artist whose music tends to be interpreted as autobiographical. Maybe he just couldn't free himself of a sense of doom. Maybe his outlook, formed by a childhood full of parental abuse and the deaths of several beloved siblings, was simply morbid. Death certainly seems to stalk the pages of this symphony, even though it wasn't until 1907 that Mahler found out that he had a heart condition that would kill him in four years, and lost his eldest daughter, and... well, his wife Alma's theory was that this symphony's doom-laden music was prophetic. The Sixth Symphony is a huge, four-movement work full of striking themes, amazing tone-colors, and strange sounds previously unheard in the symphony hall. It has a huge orchestra with some 40 wind players (including loads of brass), a boatload of strings, two harps, celesta, oodles of percussion, and even some offstage instruments--chimes and cowbells, which ring in on indeterminate pitches and rhythms during quiet passages in three of the movements. It has a two-meter tall, one-meter-square plywood box which a percussionist, mounted on a stepladder, hauls off and hits with an enormous wooden mallet--twice during the finale. There are parts for cymbals, bass drum, xylophone, glockenspiel, triangle, tam-tam and all kinds of other stuff I don't have the vocabulary to describe, generating at times overwhelming explosions of sound; now and then one could see the percussionists adjusting their earplugs. It is its own unique, weird, dreadful, wonderful world of sound.

Bychkov decided to play the four movements not in the order Gustav Mahler himself conducted them, but as he first published them, with the Scherzo second and the Andante third; even the printed program had them vicey-versey. On the other hand, he didn't second-guess Mahler's final published intentions to have only two "hammer-blows of fate" in the finale, whereas Bernstein's video-taped performance with the Berlin Philharmonic restored a third hammer-blow that had been in an unpublished autograph. 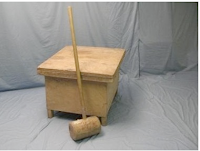 Enhancing the pleasure of my experience was an opportunity to sit next to a true afición. The gentleman next to me, who (I found out after the concert) had come all the way from Kansas City to hear a concert he knew he had to hear from the moment the '10-11 season was announced, spent most of the symphony's 80-minute duration on the edge of his seat, scarcely containing an apparent urge to conduct it. Out of the corner of the eye I saw, and in other ways sensed, how he tensed himself for the climaxes. It was like watching someone spiritually warming his hands in front of a blazing fire. As the long ovation ended, I asked him for his name and learned that he sings in a chorus, and has a huge collection of classical LPs to which he listens devotedly, and that he had traveled eight hours, round trip, for this concert. I think that says more than any words I can compose as to how deeply this music was felt, and how important it was to hear Bychkov playing Mahler with the St. Louis Symphony Orchestra. Wish you had been there?
Posted by RobbieFish at 10:56 PM