Today I went to a live performance of the Metropolitan Opera of New York City... without leaving St. Louis!

A local AMC movie theater participates in the Met's live broadcast for digital cinema. Until today, I have never gotten around to seeing one. But I decided that a $22 ticket to see an opera performed live on a large screen might make up for several weeks' drought of new movies I wanted to see. So I checked out the showtime, made plans, and... went.

Today's feature was the second weekend of the Met premiere of Nixon in China, which is currently described as the greatest American opera of the 20th century. Though the opera has undergone some changes and refinements since it first graced the stage in 1987, it benefited from being conducted by its composer John Adams (not to be confused with the President), directed for the stage and screen by its original director (a flamboyant Peter Sellars, not to be confused with Peter Sellers), and headlined by the same James Maddalena who created the role in 1987, and who has been performing it internationally ever since. 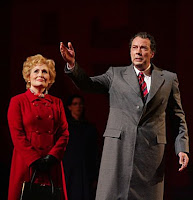 Having never seen the opera before, even when it was performed here in St. Louis in 2004 (its first US production since '87), I can't say exactly how much it has changed over the past 24 years. I can say, however, that it is a very powerful, enjoyable, and thought-provoking. The libretto by poet Alice Goodman alternates between contemplative verse and heavily researched recreation of actual events, such as the meeting between Nixon and Mao which, according to a State Department expert who was present at the meeting, was half verbatim and half wordscape that nevertheless captured the authentic spirit of the historic event. I refer to an expert who, along with members of the cast and crew, was interviewed during the two intermissions by opera star Thomas Hampson.

Adams writes music full of motoric energy, rapid contrasts, vast ranges of mood from tender to omonious, nuances of dance and sensuality, and flashes of irony and humor. The characters, as written by Goodman and directed by Sellars, are richly complex and sympathetic. The production design and choreography (to say nothing of the dancers) were beautiful. And the acting, particularly by Maddalena as Dick and Janis Kelly as Pat Nixon, was magnificent--though Maddalena did not seem to be in very good voice today. Madame Mao was chilling, Chou En-lai suffered stoically, and Mao's trio of secretaries were like a blue-smocked, horn-rimmed version of Robert Palmer's backup singers. Henry Kissinger plays an outrageous part in the second act's opera-within-an-opera, later gets it on with one of the secretaries & makes his final exit in perhaps the only instance in all of opera where a character excuses himself to go to the bathroom.

Mao himself, played by Robert Brubaker, constantly stole the show with his strange remarks that could be interpreted either as sage parables or as demented ravings. Complete with R-rated language and ditto stage-business, it was definitely not a show for the whole family; and it's just as well I didn't have a family to take with me, because the seat next to me was puked on by someone in the audience shortly before I arrived. (Luckily, the usher was equipped with a plastic carton of mint-scented kitty litter.) I thought the opera's low-key ending was a strange decision, but then I remembered El Niño, in which Part I has a grand finale and Part II is just one big anticlimax. I guess Adams likes arches. Or at least, curves.
Posted by RobbieFish at 5:41 PM