Scene: a school bus, the first day of school after winter break, 7:26 a.m. New Kid arrives on the bus and, in looking around for a space to sit down, spots You sitting alone in about the fourth seat from the back of the bus, driver's side.

NEW KID: Is it all right if I sit here?

YOU: Sure. You're the New Kid, eh? Did you just move here?

YOU: Really? What kind of vessel was that? 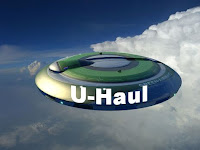 NEW KID: I think it was an Andromeda Sprinter, Model pi to the power of phi divided by the universal constant, but it was only a rental. Lousy suspension, top velocity of only 73 times the speed of light, but when you're on a tight schedule you can't always be choosy.

NEW KID: School buses are the same everywhere, though. Aren't they?

YOU: That's for sure. My name's Kevin. What's yours?

NEW KID: You may call me Zeeb.

YOU: Zeeb, huh? I haven't heard a name like that before.

NEW KID: It's not my real name.

NEW KID: It's kind of a nickname.

YOU: I mean, what's your real name?

NEW KID: You wouldn't be able to pronounce it.

NEW KID: All right. Can you say Vlazbnishk?

NEW KID: No, it's Droomfprath.

YOU: You keep changing it. How am I supposed to be able to get it right?

YOU: So, your name is unpronounceable because it changes every moment?

NEW KID: That would be a valid analysis from your frame of perception.

YOU: Which means what, exactly?

NEW KID: My name only seems to change from your point of view. It exists on a plane of reality unattainable to anyone on this planet. 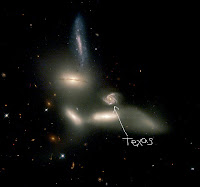 NEW KID: A planet on the southern arm of the spiral barred galaxy NGC 6027d, which your world regards as a member of the Seyfert Sextet, though in fact it is not in physical proximity to that group.

NEW KID: I can show you pictures to prove it, if you doubt me.

YOU: Texas is a state of the Union.

NEW KID: Sniff! I would expect your people to make such an arrogant claim.

YOU: I mean the Texas on Earth.

NEW KID: You have a Texas on Earth? What an interesting coincidence.

YOU: Have your people visited Earth before?

NEW KID: A difficult question. We do not experience time as your people do.

YOU: What, like you don't have before and after? Past, present, and future?

NEW KID: Please. You'll give me a headache. I have so little experience with pain that I'm afraid I might cry.

YOU: Yeah, you'd better not do that.

NEW KID: You have no idea. At least when you cry, the tears flow out of your eyes.

NEW KID: When I cry, the tears flow into my eyes.

YOU: That's got to be annoying.

YOU: So, what are your plans for this year?

NEW KID: I'm hoping I can improve my grades in quantum mechanics, astrophysics, and Spanish. I might also try out for the soccer team. That is what you call football here, is it not?

YOU: Spanish? They teach Spanish in the Seyfert Group?

NEW KID: I told you, my galaxy is not affiliated with that cluster. And no, Spanish is not widely spoken where I come from. But we were a long time getting here, so I had time to run through a lot of Rosetta Stone CDs. I believe I've got Navajo, Tamil, Hungarian, Cantonese, and Finnish down pretty well, but there's something about Spanish that just eludes me.

YOU: Yeah, I have the same problem.