Tonight I picked up a friend at Lambert Airport and, since we had time to blow, drove him down to my neighborhood in St. Louis's south city for a bite to eat. We dined at Baldo's Restaurant on the block of Hampton Ave. between Potomac and Oleatha Streets, where I had previously enjoyed one of the best plates of chicken marsala on record, and which

I remembered as a cozy little joint with a parlor full of ornate settees and low tables at which one could imagine tidy old men drinking tiny cups of espresso and arguing in Italian about Inter Milan.

I've been carrying around a gift certificate for $25 off a meal at Baldo's since last June. Unfortunately, the fine print said it wasn't good on Saturdays. But, to make it up, our waitress offered us a terrific deal: a choice of one of four entrees and one of two sides, soup, salad, crusty bread, a glass of wine, and a scoop of gelato for something like $13. We went for it.

The rolls were indeed crusty. They were also big, warm, and covered in well-toasted sesame seeds, a flavor I have come to appreciate; and although a decanter of olive oil was on the table, the waitress was considerate enough to provide pats of butter and margarine as an alternative bread-spread. She also proved to be one of those waitresses to treasure, the kind who refill your icewater without asking or being asked.

The soup was a cup of piping-hot minestrone, which is to say, tender pieces of vegetable in a dark, beefy broth. No complaints. The wine was... well, I'm no wine expert, but given a choice between white and red, my friend and I both opted, rightly or wrongly, for the red. And whatever wine it was, it was good: not too bitter, as young wines can often be, and with a pleasant round full flavor that went down easily and didn't leave a chemical aftertaste. It was probably something cheap but well-cared-for and not so sharply distinctive that it would offend an uneducated palate. See, I can say something intelligent-sounding without knowing the first thing about wine!

For the salad, I went with the house Caesar and my friend asked for an Italian dressing. It isn't often you can say much about the salad. The leafy lettuces were nicely ripped, the dressing was delicious, and the broad, thin wedge of tomato that came with each salad (and I ate both of them, since my friend didn't want his) was exceptionally juicy and full of fresh tomatoey flavor. There were also rings of onion in there and perhaps other things that I forget. But let's face it, it was a salad and we had years of catching-up to do in only a couple of hours, so what I mostly remember is that it took me a long time to eat it because I was talking so much. 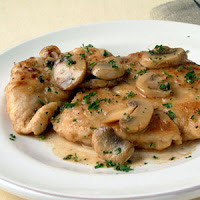 His main course was the chicken marsala, and his side was pasta in meat sauce. He was awestruck by the deliciousness of the chicken--two halves of chicken breast laid out under a garlicky marsala-wine sauce, with mushrooms on top--and I was, frankly, envious. On the other hand, he didn't think the meat sauce on his pasta was anything special, and it probably wasn't the "right" side to go with chicken. Oh, well. I had two pork chops with mushrooms in a sherry sauce, which except for being nicely done chops with an occasional extra-brown bit that I particularly liked, were nothing special. I only ordered it because (1) I didn't want to waste the opportunity to broaden my Baldo's experience beyond chicken marsala, and (2) when I asked the waitress what she would choose, between the shrimp scampi and this, she suggested this. Maybe I should have ordered the scampi!

My side-dish was stuffed zucchini, which I was surprised to find out was stuffed with a sweet, fluffy, ricota-cheese mixture and covered with some sauce or other. I think I got the better deal on the side-dish, though it wasn't quite what I had visualized when the waitress said "stuffed zucchini"--here was me, thinking of an Italian variant on Ari's stuffed eggplant. It all went down, and stayed down, and as to what it turned out to be, I can make no complaint. 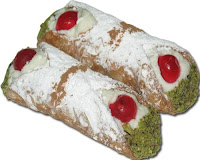 For dessert we had not only the house-specialty Italian hazelnut gelato, but also--because my friend had never had one before--a pair of cannoli, one each. Crispy on the outside, cool and creamy on the inside, with a perky hint of lemon flavor and a decorative maraschino cherry at each end, they were absolutely delicious. I've never had two cannoli that were alike (from different restaurants, I mean), so it's hard to compare Baldo's cannoli with those of the competition. The pastry tube part reminded me of those thin tea-cookies (ginger snaps, etc.) that you can get in long cardboard tubes at grocery stores that cater to international tastes. I would be much more excited about those cookies if I could have them with the fluffy, lemony, creamy filling that filled these cannoli.

Then I drove and drove and drove. I had to get my friend from St. Louis to Litchfield, Illinois, and drive back in time for an 8:00 concert at Powell Symphony Hall, to which I had previously purchased a ticket. It ended up being a close-run thing. I arrived at about 7:45, with just enough time to spare that I didn't have to drive recklessly, and coughed up the full $10 for gated-lot parking so that I didn't have to circle around looking for a free piece of curb.

The concert opened with the Concert Românesc by modern Hungarian-born composer György Ligeti, he whose Atmospheres formed part of the soundtrack of the film 2001: A Space Odyssey. The "Romanian Concerto" was surprisingly un-avante garde, having been composed in 1951 under the dictates of Hungary's ruling Communist Party, which demanded something very much "of the people." In spite of its classical sonorities and folkish themes, the piece was yanked after only one rehearsal and remained under the ban for 20 years. I enjoyed the four connected movements, except for a few flubs in the horn section which one comes to expect after a while; the orchestra's concert leader furnished an agile violin solo that helped drive the piece to its energetic close.

Then David Halen came out on stage and knocked Brahms's Violin Concerto out of the park. (Pictured: Brahms and his friend Joseph Joachim, the original soloist in this concerto.) It was a good thing that Halen had a lot of room to move around in, because he did a lot of expressive footwork while sawing out one beautiful melody after another, from the first movement's yearning-soaring theme which the soloist adds to the themes already introduced by the orchestra, to the tender melody first laid out by a gorgeous oboe solo in Movement II, all the way to the finale's wild Hungarian fiddle theme. 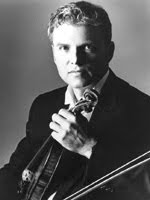 Perhaps the only tiny flaw in the concerto's performance--more like a beauty-mark than a boo-boo--was how the orchestra seemed a mite surprised by the quickness of conductor David Robertson's tempo at the beginning of the middle movement. But then, Robertson always seems to be fighting against the performance conventions which rely too much on exaggerated tempi to wring every drop of pathos out of a slow movement; he proves, again and again, that all the emotional power the piece needs is written right into it, if only we can trust the composer. 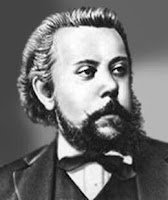 Finally, after the intermission, the orchestra showed us Pictures at an Exhibition, Russian composer Modest Mussorgsky's celebrated homage to an artist friend who had recently died, in the popular orchestral arrangement by Maurice Ravel. It's a stunningly powerful piece, full of strange colors, spooky imagery, and viscerally effective moods ranging from nobility to humor to dread to panic and finally, to a colossal "big finish" in which religious piety and civil grandeur first alternate and then blend together in a sustained shout of brass and bells and percussion and anything else that can vibrate.

Pictures always brings down the house. Nevertheless, I wish the orchestra could have sounded better prepared for it. There were more times, as in the second movement of the Brahms, when one gathered that they weren't expecting the tempo Mr. Robertson gave them. I drew this impression from a variety of little things--a bit of fuzziness here, a xylophone note out of place there, the usual things that can go wrong in any performance without reflecting badly on anyone... except the saxophone soloist, who clearly needed to spend more time locked up inside "The Old Castle," 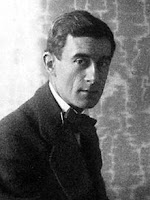 until he could get through his moment in the spotlight without mangling his lines. Repeatedly.

But I'd better shut up about that now, because I'm going to be on stage with these folks next week and we're all going to make each other look really good. Mr. "I just washed my saxophone and I can't do a thing with it" was well forgotten by the overwhelming conclusion of the piece, leaving the audience applauding so loudly that my phrase "bring down the house" might have nearly come true. After all, a performance doesn't have to be note-perfect to be a great one. It can often be the ones that skate dangerously close to the edge of the ice that thrill us the most, the performances animated by a commitment to what the music means and an excitement about the power it wields, that make the fuzzy moments and even the saxophone flubs worthwhile because now, we too share the same thrill and conviction.