This past weekend I participated in two live performances, one of them broadcast on classical radio, of Brahms's German Requiem with David Robertson conducting the St. Louis Symphony Chorus and Orchestra. Also singing with us were soprano Twyla Robinson, who did Rossini's Stabat Mater with us a couple years ago, and baritone Stephen Powell. And if I may say so, they were very powerful and beautiful performances.

This was my second German Requiem with the Symphony. The previous one, five years ago, was part of a program in which we also sang John Adams's On the Transmigration of Souls (in memory of the 9/11 attack on the World Trade Center), a program with which we not only ended the 2005-06 season but also earned raves at Carnegie Hall. While that, to-date my only trip to New York, was a pinnacle experience, I think this performance was even better. I believe we took our musicianship further, and I personally benefited from being more comfortable with the piece to being able to participate on a higher level while being spiritually moved at the same time.

The German Requiem, officially ein Deutsches Requiem, is not a version of the liturgical rite for the dead. Rather, it is a choral cantata based on texts Brahms himself selected from the Luther Bible. Though he avoids explicit mention of Christ or the atonement, Brahms chooses verses that a Christian will instinctively associate with some of Jesus' most deeply comforting promises, especially for those who grieve or who tremble in the face of their own mortality. It is a non-sectarian kind of comfort that Brahms intended to embrace people of all faiths, but it is also a comfort that Christians, and especially Lutherans, can hardly separate from the original context of the lyrics.

Movement 1, performed without violins, opens the work with a sonic exploration of the gray, shadowy, gloomy, even muddy world of grief. But the music grows tenderly hopeful with the words: "Blessed are those who mourn, for they shall be comforted..." Movement 2 presents the sobering thought that even the brightest flower of mankind must wither and die: "For all flesh is as grass...but the Word of the Lord abides forever." This last phrase pivots the piece into such a strong affirmation of hope that I almost got choked up singing it: "The ransomed of the Lord will return... Joy, everlasting joy, will be upon their heads." 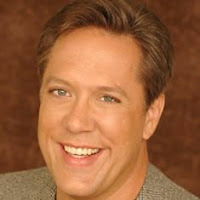 Movement 3 is a dialogue between the baritone soloist and the chorus, as between a teacher and his students, the one "lining out" the lesson that the others repeat back to him: "Lord, teach me that there must be an end to me... Now, Lord, with what shall I comfort myself? I hope in You." It concludes with a fugue over an immovably solid pedal point: "The souls of the righteous are in God's hand, and no torment will ever touch them."

Movement 4 is the sweet, delicate, at times almost ecstatic anthem: "How lovely are Your dwellings, O Lord of Hosts... Blessed are they who dwell in Your house; they are always praising You." Then comes Movement 5, the heart of the piece, a very slow solo for soprano accompanied by breathlessly soft chorus. By putting Jesus' words in the soprano's mouth, particularly at a time when the composer himself grieved for his mother's death, Brahms suggests that what we are hearing are the sentiments of the dearly departed themselves: "You now have sorrow, but I will see you again, and your hearts will rejoice, and no one takes your joy from you..." The chorus, as though whispering the inner thoughts behind these words, repeatedly sings: "I want to comfort you as one's mother comforts him."

Movement 6 is full of the mystery of the resurrection, the chorus carrying the main part of the argument while the baritone soloist fills in a few recitative-like bits: "For we have here no abiding city, rather we seek the one to come..." This gradually builds up to an overwhelming climax, which a friend in the audience described as "like an explosion": "Death is swallowed up in victory. Death, where is your sting? Hell, where is your victory?" Brahms finishes this movement with a lengthy, jubilant fugue, saying: "Lord, You are worthy to receive praise and glory and power...."

Finally, Movement 7 brings the piece full circle with a musical quotation from the first movement, while at the same time moving us far beyond the opening beatitude about here-and-now grief to present a more forward-looking view of death and beyond: "Blessed are the dead who die in the Lord from now on. Yes, the Spirit says that they rest from their labor...."

If you haven't heard these comforting words set to Brahms's stunning music, don't wait until someone close to you dies to do so. Learn to know and love the German Requiem now, so that you will know which tracks to turn to when you or someone you know needs comfort.

This weekend's concert, concluding with the above work, also featured the U.S. Premiere (!!) of a piece written in memory of the Columbia astronauts, titled "Seven," by Hungarian composer Péter Eötvös, who is apparently one of the most successful composers alive today to judge by the proportion of his operas that are currently in production somewhere in the world (i.e., 7 out of 7). David Robertson credits the fact that "all the other orchestras in this country are so boring" for the serendipity of our being able to hear it played for the first time on American soil.

"Seven" is a violin concerto in two movements, the first of which is a series of accompanied cadenzas representing each of the seven astronauts, and the second of which seems to rhapsodize on the human achievement of space flight. The orchestra included some unusual instruments, such as a bass flute, and was divided into seven ensembles on the stage, plus six additional solo violins deployed around the auditorium. It's a really modernistic piece, creating some spacy impressionistic sound-images and ending with the soloist making some unearthly sounds one might not have realized a violin could make. Our soloist this weekend was Akiko Suwanai, who (if I understood correctly) originally commissioned the piece. 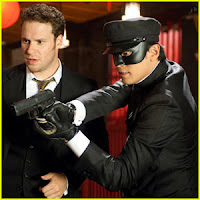 And tonight, I wrapped up the arts-and-entertainment portion of my weekend with a long-anticipated trip to the movies. My film of choice was The Green Hornet, a hysterically funny, action-packed, blow-'em-up Marvel Comics movie based on the perfect character for Seth Rogen to play (and it ought to be, since he co-wrote the screenplay): a slacker superhero whose powers mostly consist of being rich, stubborn, and reckless, and whose survival in a crime-ridden city is due mainly to the journalistic research of his unwitting mastermind (Cameron Diaz) and the mechanical and martial-arts genius of his driver Kato (Chinese rock star Jay Chou owning lock, stock, and barrel, the role originally created by Bruce Lee).

The show also features a grumpy newspaper editor played by Edward James Olmos and a ridiculously insecure villain played by recent Oscar alum Christoph Waltz. And though there are some terrific chases and scenes of massive property destruction and numerous casualities, the coolest scene for my money is the fight between the two sidekicks, which ultimately leads to the climactic moment where the Green Hornet apparently agrees to assassinate himself... You'll just have to see it to understand what I mean.