I don't remember who taught this to me, and I haven't consulted any reference books about it, but from memory here is a little two-player game, requiring one standard deck of playing-cards, that you may even be able to teach to someone who is too old and set in his/her ways to learn Cribbage (which, I find, is impossible to teach to anybody above college age--only kids are dumb enough not to realize how hard it is).

1. DEALING THE CARDS
Somebody shuffles the deck (after Jokers are taken out), then deals to each player a stack of 12 cards face-down, followed by one card face-up on the table.

2. LAYING DOWN THE CARDS
Beginning with the dealer's opponent, the two players take turns drawing a card off their piles and laying it face-up, arranging the cards around the initial card in a 5 x 5 square. It doesn't matter whether the opening card ends up at the center of the grid, or at one corner, or anywhere else, as long as all cards end up in the same 5 x5 square. 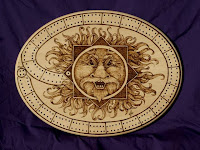 4. DECIDING WHO WINS
When all 25 cards have been played, both players count the points in each of their rows or columns. The player who scores the most points in total, wins. In the event of a tie, the dealer wins... but the other player gets to deal next time!

5. AN EXTRA TWIST
With both players' consent, you can add an extra element of jeopardy to the game: If you can show your opponent that he overlooked any points while scoring his hand, you can add the the points he missed to your total.

IMAGES: Some of the numerous designs for cribbage boards, in case you ever feel brave enough to experience the full richness of cribbage. Note the board shaped like the number 29. This is a reference to the highest-scoring single hand that is possible in cribbage, with 8 pts. in 15's from different 5-5-5 combinations, 8 pts. in 15's from J-5 combinations, 12 pts. in pairs from different 5-5 combinations, and 1 pt. for "knobs" because the Jack is of the same suit as the starter card; 8+8+12+1=29. I have personally had this hand at least once. That much, at least, I have achieved in this life!
Posted by RobbieFish at 6:37 PM

Email ThisBlogThis!Share to TwitterShare to FacebookShare to Pinterest
Labels: games