Last night I took myself to a midnight movie premiere. The show was the 1930s cops-and-robbers epic Public Enemies, directed by Michael Mann, whose films are typically long, stylish, brooding affairs punctuated by intense action sequences. This one follows the parallel careers of bank robber John Dillinger and the FBI agent in charge of catching him, Melvin Purvis, from October 1933 (when Dillinger engineered a prison breakout) to July 1934 (when he was shot dead outside a movie theater).

Ah, the cast. It isn't often that one sees a film so lavishly and successfully cast. Johnny Depp makes magic as Dillinger in a portrayal that combines tenderness, humor, tragedy, and sheer magnetic masculinity in a way he has never managed before. Only someone who could play Jack Sparrow and Sweeney Todd could turn the word "Coffee" into a laugh line and (by expressing a sociopathic indifference to human life) send shivers down your spine, and within the same brief scene. To his poetically inarticulate love speeches he brings a sizzle worthy of Brando; and in spite of one crushing loss after another, he saves up his tears until just the right moment to ensure that the audience will be on his side, forever.

Appearing opposite him is Christian Bale, who actually looks and sounds like a different person for the first time (as opposed to getting by on sheer incandescent energy). His Purvis is soft-spoken, unflappable, ethically ambiguous, with a soft South Carolina accent and a remarkable restraint. Not once does he pull his trademark "whispering and screaming at the same time" trick. Attaboy.

As Dillinger's criminal associates, we get to see Stephen Dorff, David Wenham, Jason Clarke, Giovanni Ribisi, Stephen "Baby Face" Graham, and Channing "Pretty Boy" Tatum. As his two girlfriends we see the sultry Marion Cotillard and the perky Leelee Sobieski. His slick-as-butter lawyer is unforgettably portrayed by Peter Gerety. Meanwhile, on the side of the law, we get to watch a virtually unrecognizable Billy Crudup do a loathesome turn as J. Edgar Hoover. Rory Cochrane and Shawn Hatosy play a couple of ill-fated agents. Stephen Lang, who lately played "Stonewall" Jackson in one of the most tiresome Civil War movies I ever saw, recovers his manliness as Agent Winstead who, you can tell from his first squint, is going to kill John Dillinger in the end. Matt Craven plays one of Winstead's stooges. And Lili Taylor plays a female sheriff who was too far ahead of her time for her own good.

The movie is not altogether historical, of course. The escape attempt with guns carved out of soap? In real life it ended badly. The scene where Dillinger brazenly waltzes through the very FBI office that is tracking him down? Completely made-up. And Melvin Purvis couldn't have gotten command of the Dillinger task force as a reward for killing Pretty Boy Floyd, because Floyd was killed some months after Dillinger. Various members of the gang came to different fates, at different times, than as depicted in the movie. 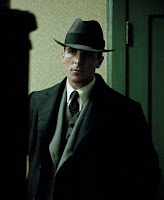 But some things in Public Enemies are disturbingly real. The innocent civilians gunned down by the FBI by mistake, while the real bad guys got away? That happened. The girlfriend who kept the secret of Dillinger's hide-out all the way to prison? Real. The gangster movie, Manhattan Melodrama, which Dillinger went to see with his other girlfriend right before he was shot? Eerily appropriate... but also real. It's even possible that the movie holds back from portraying the full truth about Purvis's methods -- for example, he is alleged to have ordered Charles Floyd's execution without a trial -- but sometimes, the truth is so strange that fiction must stop short of it, in order to be believed.

It was a long, stylish, brooding movie punctuated by intense action sequences. No surprise there! The look of it was exquisite. The camera work was sometimes bumpier than it strictly had to be, but often strikingly effective. There were a couple of dolly-shots in which someone is walking straight toward the camera, in close-up, and they frankly made my eyes water. And there was a bit of blood and gore, as bullets made exit wounds out of people's torsos and faces. But I thought the nudity was admirably restrained; Marion Cotillard, for example, may someday be able to watch this movie with her children, in spite of a bedroom scene and a bathtub scene, the latter ending with someone saying, "Lady, put some clothes on!" 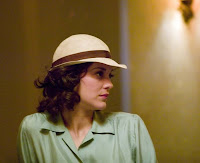 The story neither rushes nor drags, but unfolds at just the right pace, especially as the suspense builds toward Dillinger's sticky end. The clips from Manhattan Melodrama are a perfect touch, given the similarity in looks between the leads in both films. With a large cast of characters moving on complex trajectories, it is a film full of subtle variations in look and feeling. It makes the dawning of the age of Federal Crime, and the prosecution thereof, seem like the passing of a golden age (though it was only golden for the criminals who profited from it); it makes Dillinger, dangerous crook that he was, seem like a dashing, daring, Robin Hood-like hero; it makes you fear for the conscience of the Special Agent hunting him; and when Dillinger goes down, and Purvis walks away, you may be surprised by which one the film makes you pity.

Public Enemies is a great film: a feast for the eyes and for the mind. I'll expect it to get lots of nominations and rewards, when the time comes for that kind of stuff.
Posted by RobbieFish at 9:56 AM