Today's end-of-the-month debauch included a visit to Borders (where I spent a 40%-off coupon and bought 3 books), a movie (the richly textured kidnapping drama Changeling, for which Clint Eastwood deserves another best-director Oscar), and a meal (eggplant parmagian' at Pasta House). And now, in total defiance of my "It's Reformation Day, not Halloween" principles, I am sitting around waiting for trick-or-treaters with a jack-o-lantern-shaped bucket full of Dum-Dums. Let's unpack each of these frivolities, working backwards.

I picked up the Dum-Dums and the bucket at Wal-Greens on my way home, when I realized it was still only 7:00 and there still might be kids at large, begging for sweets. I figured if no one showed up, I could enjoy them myself over a more or less long period of time. It never hurts to have a pumpkin-shaped bucket around the house. And the price was right, $5 for a 2-pound bag of assorted-flavor suckers.

The Pasta House was the one at 9012 Gravois Road, about a mile outside the city in the village of Wilbur Park. It's an old, rambling restaurant that looks like it's had a few additions put on. The staff were all wearing cute costumes - cheerleaders, the devil, a nurse, a cat, etc. - and the place was really busy. I started with a couple of warm, crusty rolls and a big lettuce salad, drenched in parmesan cheese and vinaigrette dressing, and loaded with chunks of onion, pepper, and artichoke. Then came a huge plate with steamed broccoli at one end, shell pasta in bolognese sauce at the other. For the most part, I only had eyes for the enormous helping of melanzane alla parmigiana in the center of the plate. Some of it was very good, though not the best I've ever had. The sauce might have been a bit too tangy, I thought, and the breading was pretty soggy. But over all I was very satisfied.

What about the movie? It's a period piece, based on events that took place in the Los Angeles area between 1928 and 1935. It features Angelina Jolie as a single mother whose 9-year-old son Walter is snatched from their house one day while she is at work. You would think that when the police find a boy matching Walter's description, and admitting to be him, her nightmare would be over. But it's only just starting. For the boy who steps off the train and into Momma's waiting arms... isn't Walter. Jolie's character spots this right away, but the detective in charge of the case insists that she's just being difficult. When Jolie enlists the aid of a local crusading minister, and obtains testimony from her son's dentist and schoolteacher that the boy claiming to be Walter isn't her son, the detective has her committed to a psychotic ward where the police put a lot of women who get in their way.

What began as a mere mother's worst nightmare turns into a horrific ordeal of police corruption and psychological abuse, all while a child serial killer continues to rack up victims.

This film sustains a high level of emotional intensity, largely on the strength of Jolie's heroic-yet-vulnerable performance. She is supported by a solid cast - many of them cast decidedly "against type" - including elegant Colm Feore as the crooked police chief, handsome Jeffrey Donovan as the sickening Captain Jones, often-creepy John Malkovich as the saintly Rev. Briegleb, everyman Michael Kelly as the good cop who really cracks the case, distinguished-looking Geoff Pierson as the lawyer who fixes everything, weasely Frank Wood as Jolie's apparent love interest, and boyish Jason Butler Harner as the unbalanced axe-murderer who ends up twitching at the end of a rope.

If I had been casting the movie, I might have shuffled those actors around a bit; but Eastwood draws surprising effects out of his choices, and underlines them with music he composed himself. A man of many talents, our Clint is. If you haven't been emotionally moved by the end of the movie, you're hopeless. If the acting and the story don't do it, maybe the mint-condition-antique look of the film will; it's beautiful to look at. And though perhaps it isn't "the thing" to see on Halloween (like a freakishly scary slasher flick), it does have some scary moments in it. 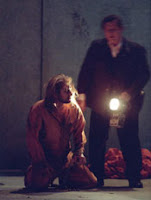 As for the books I bought...well, I went out with the intention of getting Anne Ursu's The Siren Song, but it wasn't to be had. Instead I spent my bucks on Alfred Kropp: The Seal of Solomon by Rick Yancey, The Day of the Djinn Warriors by P. B. Kerr, and Flora Segunda by Ysabeau S. Wilce. The first two carry forward series that I have been following; the third just looked good, and I intend to start reading it right away.

Finally, I may have said this before, but it's my duty as a Fine-Art-Music Snob to say it: If you're throwing a Halloween party, consider the classics as you choose chilling background music. Obvious choices are Saint-Saëns's Danse Macabre, Liszt's Totentanz, Sibelius's Valse Triste, Gounod's Funeral March of a Marionette, Mussourgsky's Night on Bald Mountain, Dukas's Sorcerer's Apprentice, and Tchaikovsky's hair-raising depiction of hell in the tone poem Francesca da Rimini. But don't forget to throw in some shiver-inducingly nasty moments from the world of opera: Jago's Credo in un Dio crudel aria from Verdi's Otello; Menotti's Halloween opera The Medium; the Ride of the Valkyries from Wagner's Die Walküre; and to my ear the spookiest opera outtake of all, Rocco & Leonore's gravedigging scene from Beethoven's Fidelio. Rest in pieces!
Posted by RobbieFish at 6:34 PM