Before I review the movies I saw yesterday, I should report more progress bringing Sinead out of hiding. Last night before bedtime she allowed me to coax her out into the open for a longer period. She accepted my hand's touch, purred a lot, cuddled on my bed for a while. During the night I heard her scampering around the room, eating kitten food, using the litter box, meowing, and (once) attempting to jump from one dresser to the other and not quite making it. She also hopped on and off the bed a few times, and climbed over my legs in the process. I was thrilled, but I kept it inside. I didn't want to scare her off. 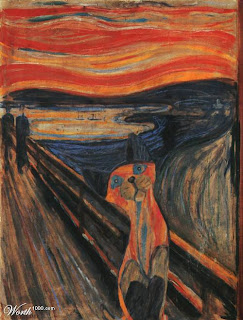 This morning, Sinead was back to hiding, perhaps because Tyrone sneaked in the moment I opened the door and had to be chased out of the room. I had to call Sinead's name and scratch the carpet with the back-scratcher for a long time before she started purring. When she did come out from behind the bookcases, I popped her in the cage and brought Tyrone in so they could look at each other. After a few moments of curious sniffing, they hissed at each other - Tyrone started it - so I kicked him out of the room again.

As a result, it took a REALLY long time to coax Sinead out of hiding again. Since then she has almost only allowed me to touch her via the wooden backscratcher, which fascinates her. She plays with it in a wonderful kitteny way, but she still takes fright at the slightest movement or sound - even from outside the apartment! THIS is why I always looked forward to Tyrone and Lionel outgrowing kittenhood & becoming adult cats. The world is way too freaky for a nervous little kitten to deal with. I am already impatient to meet the beautiful adult cat Sinead promises to become.

Film-wise, I started my Friday afternoon debauch with Jerry Seinfeld's Bee Movie, which is much better than the obnoxious early trailer led me to expect. It does for insects what A Bug's Life did for...er, insects. It has a lot of goofball humor and a plot in which the extravagantly improbable meet-cute of a young male honeybee and a human female florist leads to (1) a lawsuit against the human race, (2) a catastrophe that threatens the very existence of life on earth, and (3) a hilarious sequence in which both pilots on a commercial jet are out cold and the only ones who can land it safely are bees. The makes good use of the vocal talents of Seinfeld, Matthew Broderick, Chris Rock, Renee Zellweger, Kathy Bates, John Goodman, Patrick Warburton, Rip Torn, and Barry Levinson, among many others.

The second movie I saw was American Gangster. In this film Denzel Washington plays a 1960s Harlem crime kingpin who takes over the heroin trade, and Russell Crowe plays the scrupulously honest New Jersey cop/lawyer who eventually takes him down. The film also features Armand Assante, Ted Levine, and Cuba Gooding, and effectively shows the horror and genius of organized crime and police corruption in the Vietnam War era. There were some obvious homages to The French Connection too: not only was the phrase "French Connection" actually spoken, but there was a scene in which an airplane is dismantled (in a search for drugs) in a manner similar to the way a car was taken apart in The French Connection. The movie is really very powerful - scary, sad, moving, exciting, suspenseful, disgusting, ironic, and sometimes surprising. 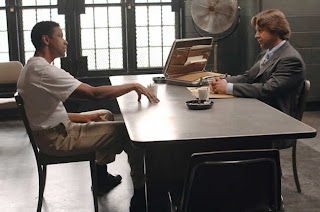 The acting in American Gangster forced me to make three observations: (1) Armand Assante obviously has COPD, the disease formerly known as emphysema, but that doesn't stop him from playing a Vito Corleone-type character to shame Marlon Brando; (2) Russell Crowe is truly one of those actors who disappears into his every role, so that you believe in the reality of the person he pretends to be; and (3) Denzel Washington is one of those people who always, more or less, plays himself - like some of the all-time greats, like Stewart, Grant, Hepburn - he always walks, talks, moves, and emotes like the same person, only with different hair, costume, and motives. And this is all right, because he is always in a good movie, playing a character who says and does interesting things, a character that suits Denzel from head to toe. Typically it is a character you would never want to cross, a character whose next move you may not expect, and a character who would make a good interrogator for the CIA because, after five minutes of him talking scary crazy-talk at them, most people would be ready to confess to anything.
Posted by RobbieFish at 12:58 PM

Sounds like Sineade will have quite an interesting personality. That will be fun, especially once the two cats are used to each other.