I am still dividing my nights between the torture of sleeping on the couch and the separate, but equal, torture of sharing the bed with a kitten named Sinead. She is an unstoppable force of destruction, and sometimes I think she intends to torture me to death, one pin-prick clawmark at a time. The last time I slept so poorly was when I had a cold and needed a prescription decongestant to enable me to breathe and sleep at the same time.

This is not to say we haven't made progress. Abandoning hope of acquainting Tyrone and Sinead with each other with the safety of a closed kennel door between them, I finally just threw the door open and let him come in for lightly supervised visits, and let her go out to explore the apartment a bit. Kittens explore areas within a gradually increasing radius of their nest. So Sinead has been slowly desensitizing herself to the apartment in a manner similar to the "graduated exposure therapy" that behaviorists use to treat phobias. She has thoroughly explored the bathroom now (I found her in the bathtub this morning). And she has visited parts of the living room (where I found a kleenex shredded in a distinctly kittenesque manner).

And the two cats have been exploring each other (read: sniffing each other's butts). There have been some tense moments when I considered separating them, but mostly they seem to get along all right without restraint. She follows him, he follows her. She makes submissive gestures when he's facing her, and takes swipes at his tail as soon as he's facing the other way. I can even see territorial lines being established; for example, when Tyrone sniffs around the edge of Sinead's litterbox, and then she jumps right into it and faces him down. 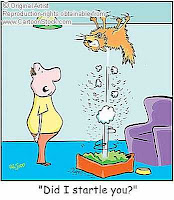 A little playing and exercise will do Tyrone good, I think. I just don't know how long he can keep up with Sinead at their respective ages. She definitely has more stamina than he does. When I'm trying to read she doesn't give me a moment of peace, but is either trying to come between me and the book or, worse, attack it. When I'm trying to sleep she does the same thing - comes between me and sleep, or in moments of desperation, frontally attacks sleep by poking me with her claws, etc.

For a while yet, Sinead's nest will still be in my room. She is still an irritable little thing who jumps at unexpected sounds and movements - even when she causes them. She did an amazing vertical jump this morning when a piece of paper she was swatting around surprised her by materializing between her feet. This is why they call animals "dumb." But she is also tiny, vulnerable, and occasionally sweet - as when she purrs loudly and lets me tickle her all over. She even submitted to being combed and brushed today, though I could never get close to the one little bit of matted fur I had noticed, under her chin.

For the time being, she will have to spend at least some time closed up in my bedroom, so I can feed her kitten food. I can't put her food down when Tyrone is around because adult cats aren't supposed to have that stuff, but they go for it like gangbusters. So the food goes up on a high shelf when the bedroom door is open, and comes down again when the door is closed. And that's life with a 5-year-old cat and a 3-month-old kitten.
Posted by RobbieFish at 12:29 PM