This weekend, I decided there was nothing playing at any movie theater within a 90 minute drive of home that I gave a toot about, other than the last couple that I've already seen. You'd think the holiday season would be the time of year when all kinds of wonderful things would be coming out, but meh. So, instead, I pawed through the cheapo DVD bin at Walmart and surfaced with these two movies. 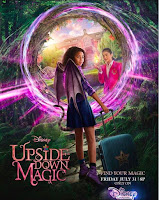 Upside-Down Magic is a 2020 made-for-TV Disney movie based on a children's book, actually a series of books, by the writing team of Sarah Mlynowski, Lauren Myracle and Emily Jenkins. Having three authors is a bit of a red flag for me; I'm not a big fan of writing by committee, so that may be why I never followed up on any opportunity to read these books. I might actually be interested now, if only to fill in a missing piece of my survey of stories about magical schools (and I'm only one book into the "Worst Witch" series, too). Another reason might be to see if the book is better than the movie, which could definitely be improved on. However, it wasn't awful.

The premise (of the movie, mind you) is that Nory and her best friend Reina have been accepted to a school of magic. Since age 7, Nory has had the ability to transform into different creatures – and I mean really different. Not just a kitten, no, not she; she becomes a kitten with a dragon's wings or an elephant's trunk, without much control over what she becomes. Reina is just a vanilla firestarter. They both go to school anxious about how they'll do, but despite Nory having a more optimistic outlook, it's Reina who gets accepted into Sage's school of fire magic while Nory, along with three other misfits, gets placed in UDM: the school for kids whose magic is too wonky to be trusted.

The UDMs are supposed to refrain from using their talents until the magic in them dries up and goes away; then they'll be safe for the boring, non-magical world. But Nory leads a rebellion, convinced that each of the UDMs in her year has something unique to contribute. Eventually, even their teacher (an unreconstructed UDM himself) joins the revolt, and just in time. Because it turns out that the threat of Shadow Magic doesn't just manifest in UDMs; this year's victim, whose power threatens the whole school, turns out to be Reina herself, leading to a climactic magical fight in the middle of an alumni day celebration in which a boy who can shoot smoke out of his fingertips (but no flame), a boy who can fly upward really fast (but can't come back down without help), a girl who can make objects fly away from her (but not toward her), and "be the best abomination I can be" Nory save the school as well as Reina.

OK, kind of a spoiler there. But really, what else could happen based on the story that's set up? It's a cute movie, nicely made, with attractive kids and teachers whose heads you want to conk together. (A few students like that, too, if we're being honest with each other.) It's no Harry Potter. But it does make some original fun with kid-sized magic and an uplifting message. Its big stars include Kyle Howard (whom you may remember from his roles in the short-lived TV series Grosse Pointe and Love Boat: The Next Wave, the role of Arlo in Orange County, etc.) as Skriff, the UDM teacher, and Vicky Lewis (TV's News Radio) as the obnoxious headmaster.

It's a light, frothy trifle of a movie, hard to mistake for a theatrical release. At times, however, it exceeds expectations, particularly (I thought) in the dark stuff surrounding Reina's struggle with the Shadow Magic. It has drama, but it could have more; the school is interesting, but not as much as it could be; it's funny and magical and kind-hearted and whatnot, but also a little predictable.

Three Scenes That Made It For Me: (1) The entrance exam, which each of the UDM kids fails spectacularly. (2) A deleted scene, in which Nory almost but not quite catches Skriff using his upside-down power on a goat. (That sounds so wrong when I say it out loud.) (3) When Reina realizes that the girl who has been trying to tempt her with the book of Shadow Magic is actually the Shadow Magic itself, and only she can see her. Crrrreepy!

My second never-heard-of-it masterpiece was The Death and Life of Bobby Z, a 2007 flick starring the late, lamented Paul Walker. I guess it's also been marketed as Kill Bobby Z, Let's Kill Bobby Z and just plain Bobby Z. I don't understand why I've never heard of it before. At least, I can't remember having heard of it. Maybe it's just a big marketing fail, since it was produced and distributed by companies I've never heard of either. But it has a terrific cast, decent production values and is altogether entertaining. It's the kind of unexplainable bomb that I've set off in past cheapo DVD binges; thank God for Walmart, I guess.

In this movie, Walker – who had a tendency to come across as a nice guy with a pretty face and not much else going on – develops a dangerous side that could have made him even more of an action hero and male sex symbol than those horrid Fast and Furious movies, if anyone had noticed. (On the record, the first F&F flick gave me such a pounding headache that I swore never to see another in the series, and I've kept that promise.) He plays Tim Kearney, a former marine whose last name everyone including himself mispronounces in various ways that will be eternally irritating to anyone from the vicinity of Kearney, Mo. (I used to live near there) or Kearney, Neb. (visited just once). Please, people. But never mind. Tim is a three-strike convict, mostly because of bad luck and the stupidity of friends and neighbors, about to go down for life in the California penal system, and not expected to have a very long life with a biker gang out to get him. (See Strike Three, slitting a biker dude's throat with a license plate in a workshop brawl.) A couple of feds offer him a deal: impersonate a dead drug dealer named Bobby Z, participate in a hostage exchange with a vicious Mexican drug lord, and take his chances from there on. Maybe as a free man; maybe as a dead man.

Understandably nervous, Tim crosses the border in a nighttime hostage exchange, but it all goes wrong when one of the feds (played by Laurence Fishburne) takes a rifle shot at the back of his head. By sheer luck, he trips and falls at that exact moment, and survives the ensuing melee. He gets taken alive to the drug lord's compound, where one of the real Bobby's ex-girlfriends happens to be staying. But she plays along with his impersonation and even tells him that the 12-year-old boy she's caring for is his (Bobby's) son by another woman, who does not appear in the picture. The kid picks up on Elizabeth calling Tim "Bobby," looks at some beat-up old photos of his father, puts two and two together, and when Tim decides to make a break for it, the kid (named Kit) goes with.

From that point on, the runaway pair is pursued, on the one hand, by the biker gang that wants revenge for Maddog's death (that's license-plate-in-the-neck dude), and on the other hand, by the drug lord and his goons, who believe he's Bobby Z. Fishburne is always somewhere in the background, pulling strings based on a corrupt agenda of his own, which I won't spoil for you at this time other than to say, you can expect a couple of mind-blowing plot surprises in the final quarter-hour or so of the movie. There's lots of carnage. Stuff blowing up. Shoot-outs, hand-to-hand combats, all to the death; some of them over quickly, others taking a while and exacting a toll on the hero. He's an amazingly tough guy to kill, though, to Fishburne's chagrin – I'll spoil this much, at least: Tim's real job, though he didn't know it, was to serve as a handsome corpse. It's so hard to find good help. And in the end, it's his relationship with a kid who isn't even really his son that will either destroy or save him.

I really, really liked this movie. I think it's the best work I've seen Paul Walker do. The Three Scenes That Made It For Me are all going to be about him: (1) The smile that he gives Olivia Wilde when she tells him why she knew he wasn't the real Bobby Z – a smile of incredible charm that he's saved up for the entire movie and you only realize it now; a smile that instantly makes this crime flick, at least in part, a love story. (2) The moment when Walker grins an insane grin – nothing like the aforementioned smile; for just this moment, you're terrified of him – and says, without hyperbole, "I'm gonna kill every man in this room." In the interest of fact-checking, he had a little help. Nevertheless, this is the scene that seals the deal for my theory that Paul Walker should have been an action hero, if only he had lived. Not just this scene; specifically, that insane grin. (3) The climactic showdown on the bridge, when Kit's voice yelling "Dad!" clinches who lives and who dies.

Why did this movie sink without a trace? It has a great structured story; fun performances by a huge, talented cast; a cool musical soundtrack; a gritty, western look; several over-the-top villains, each with different motives; and the whole, mind-@#$% issue of how a guy who's known to be Tim, not Bobby, gets away with being Kit's "Dad" at the end. It's a movie you're tempted to think about for a while, but you really shouldn't; you should just go with it and enjoy. And in case I haven't sufficiently underlined what a great cast it has, here are some of its names: Keith Carradine (whose character spends his last moment doing a "well, shit" eyeroll), Joaquim de Almeida (a Portuguese actor known in the U.S. for Desperado, Clear and Present Danger and a role opposite Paul Walker in Fast Five), J.R. Villareal (Akeelah and the Bee), Jason Lewis (Sex and the City, Mr. Brooks), Jason Flemyng (The League of Extraordinary Gentlemen, The Red Violin), Josh Stewart (whose character on Criminal Minds has a tortured Louisiana accent), M.C. Gainey (ConAir, Lost), Margo Martindale (Justified, The Americans), David Ramsey (John Diggle on Arrow), and an uncredited Bruce Dern as the crazy hippie on the beach who provides an over-the-top framing narration, like a Greek chorus on marijuana.
Posted by RobbieFish at 1:59 PM