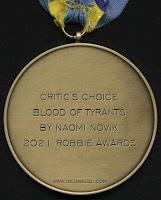 It's a bit early for the 2021 Robbie Awards, but it's been about a month since I finished reading a book now – for reasons that I won't bore you with, other than to make such excuses as "I'm working my way through a new hymnal," and "I just published a book, dammit," and "It's a super busy time at the newspaper where I'm a writer," and "Sickness took a bit out of me (and my family) this winter," etc. Of course the real reason is probably too much binging on YouTube channels when there's a pile of books practically at my elbow. Although I'm close to finishing a couple of books, I doubt either of them will be award-worthy, and generally speaking I'm so done with 2021 that I just don't want to build any more memory bridges to it than I absolutely have to. So, I might as well go ahead with the award show, although in all the years I've been writing reviews, the just 58 books I read this year (not including hymnals) is surely the most pitiful entry in a column of statistics that have frequently broken three digits. (EDIT: Actually, it's only the third-most pitiful, after 2015's 51 books and 2010's 34.) And since the only qualification for a Robbie Award in any given year is that I, Robbie, shall have read it during that year, here are the nominees: And the awards go to ...

Critic's Choice
As the critic in question, and having (until recently) the Sitzfleisch to appreciate books that many people would be too intimidated to open, I award this year's medal for literary artistry to Naomi Novik for Blood of Tyrants, which I liked just a wee bit more than her own League of Dragons. It's bad luck for everybody else that my run through the Temeraire series overlapped into this year; otherwise other authors, like David Donachie, may have had a chance. But all these months later, my senses are still full of Novik's series about dragons taking part in the Napoleonic wars. I think it's as well-written as a piece of fantasy entertainment can be and deserves to be ranked with capital-ell Literature. 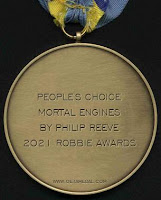 People's Choice
As a person (the singular form of people), evaluating books on pure entertainment value, and trying not to repeat myself too much, I'd like to award this one to Mortal Engines by Philip Reeve. Although my reading experience was colored by the book's differences from the movie based on it, which I had seen only a couple months earlier, I was deeply impressed by its world-building sweep, thrills, emotional power and originality. I regret that I still haven't picked up any of the sequels; I think it was the asking price that stopped me, not that my reading kept pace with my book buying anyway. If someone hadn't already made a movie out of this book, I'd be clamoring for it to be done; and even though it has been done and I think the movie is great, I can somehow read this book imagining a movie based on it that looks entirely different. That's how brilliant it is.

Kid's Choice
The kid in me played a big role in my book choices this year, and I had a great time reading them. If this medal was being awarded by a librarian or a schoolteacher, it would probably go to something edifying (but also emotionally powerful) like The Goldfish Boy. But because the award is what its name says, it has to go to The Nose from Jupiter by Richard Scrimger – which also has sequels I've never read, but hopefully I'll have time to do so in the year ahead. It's a brutally honest book, smart and hilarious and touching, and even if I can't find a written record that it made me cry, I do recall it having emotional surprises across a wide range of moods. Honorable mentions: Ban This Book by Alan Gratz and The Magic Thief by Sarah Prineas.

Best Short Subject/Documentary
There are only a couple of potential choices in the "short subject" category for the year, and it's hard to choose between them, but I feel I have to disqualify Bette Slater Seres' John J. Hammerlink book on the technicality that I interviewed the author in person for a newspaper story, so I might be too close to it to be objective. Therefore, by default, the award goes to Z is for Zombie. And since it's also, technically, nonfiction, it also carries away the nonfiction prize without any competition to speak of.

Best Graphic Novel
Again, there was no competition in this category. The default winner, which I did enjoy, was Max Brallier and Douglas Holgate's second "Last Kids on Earth" book, The Zombie Parade. Despite being heavily commercialized, it has a fun energy, lots of character, a good attitude about the whole monster apocalypse thing, and deceptively simple art that meshes really well with the prose passages. It's also frustratingly difficult to find the next installment so I can continue reading the series in order, but I'm sure I'll come across it one of these days.

Best Newcomer
I actually scored a pre-publication proof this year, making this a category. The only nominee, and therefore winner by default, is A. Lee Martinez's Constance Verity Destroys the Universe, which was lots of fun – but I said it's by Lee Martinez, so I'm repeating myself. It's the third book of a trilogy that I hadn't read before, so I've gone back to read the first two and have enjoyed them as well. With the slight reservation that the laugh-out-loud gags might actually fly too thick and fast for the novel's own good, I'd recommend it to anyone who likes books that blur the boundaries between sci-fi, fantasy and comedy. The titular heroine is both a straight-up adventure hero and a satirical figure, focusing the lens of Martinez's always penetrating snark on all the excesses of the "hero who saves all of time and space" trope, allowing you to enjoy it ironically and unironically at the same time.

Best Audiobook Like some of the other categories, this one only barely saw any competition this year, between two of Lee Child's Jack Reacher novels (Worth Dying For and Gone Tomorrow) and the winner, The Hush by John Hart. Reacher you always have with you (oh, my goodness) but this book about an evil wilderness possessing an admirable young man had – how did I put it in my review? – many distinct shadings from "slow-building dread with a sense of certain doom" and "creepy crawlies running up and down" to "freaked out heebie-jeebies" and "I'm too squeamish to look, maybe I'll skip over this next bit." The instinct to shut my eyes tight or look away can be a dangerous thing to trigger when you're driving 75 or 80 mph up Interstate 29. The danger was real, folks.

Any other awards previously distributed at the Robbies are not awarded this year, due to my fault, my own fault, my own most grievous fault – chiefly, the bout of YouTube-binging laziness that took hold in November and never let go. I doubt I would have broken last year's undistinguished record of reading 80 books, but wow. If I ever shake off whatever it is that's gotten hold of me during the last 45 days or so, this year's record won't be hard to break.
Posted by RobbieFish at 10:59 AM