Who Told You That You Were Naked? 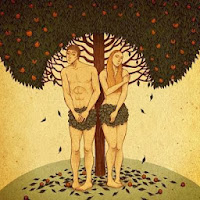 When I think back about my debate with Mr. and Mrs. Blank, I am continually impressed—or maybe the word is "depressed"—by the difficulty of overcoming a doctrinal argument based on information from outside Scripture, when the person arguing it is convinced that he is coloring within the lines of "Scripture Interprets Scripture" and "Sola Scriptura." How do you prove to that person that it is his position, and not yours, that imports data from human philosophy, reason, and experience? How, for that matter, can you be sure? A perhaps discouraging part of the answer is that you can't really expect to change anyone's convictions, much less his inmost heart, by rational arguments or empirical evidence. A man's (or woman's) mind, once formed, cannot easily be re-formed. In spiritual matters, this kind only comes out by prayer and fasting—I mean to say, by the power of the Holy Spirit. We poor, frail, stumbling, bumbling creatures can only proclaim, can only teach, can only deliver what has been delivered to us, and wait to see what the Lord makes of it.

There is comfort in this, to be sure. It means that the teacher, proclaimer, or delivery-man has no real power in himself, and therefore he has no real responsibility over the results. As long as he is faithful in what he teaches, proclaims, or delivers, he is doing all that the Lord expects of him. He does not need to torture himself, in hindsight or in foresight, over whether anyone receives his message and is changed by it. The results are in God's hands.

But there is also, running through all this, a streak of pain. When one has delved as deeply into the text as one can, and done or said all that can be done or said, it is painful to see it having no effect. It is painful to see someone you care about being led astray by vain thoughts, by teachings that undermine the simplicity of faith. It is galling to see the Word of God, which you love and serve, being twisted and made of no effect. And a feeling of helplessness is at the bottom of it all, when in spite of all your efforts to gain an open door to the word of Christ, the other person's mind remains resolutely closed.

This takes my mind back to the very first recorded word of rebuke that the Lord addressed to sinful man: "Who told you that you were naked?" (Genesis 3:11). Adam and Eve had listened to the voice of the serpent. They had entertained his advice to try the fruit God had forbidden them to eat. They had considered his suggestion that it would make them wise to a difference between good and evil. They had, for the first time, conceived the possibility of a good that was not given by God, an alternative to what He had designed for them. The seed of evil was planted in them the moment that thought entered their hearts, even before their teeth cut into the flesh of that fruit. It could not be unthought. It would go on to influence the form of every thought after that.

Already, the moment after they ate the forbidden fruit, it occurred to them that they were naked. Already, they perceived their lack of something that, only a moment before, they had never conceived of needing or wanting. Already, they began to judge what was good and what was evil by lights other than the Word of God. Was it their empirical observation that they had no clothes on? Perhaps; but surely this was no great news to them, and how could they miss something that had never entered their minds before? Was it their sensory experience of tender skin exposed to a chilly draft? Perhaps; but surely the timetable of antediluvian climate change did not progress that quickly! Was this sudden awareness of their nakedness a psychological side-effect of a guilty conscience? Perhaps, but observe how quickly the first couple moved onto the track of excuses and self-justification (Genesis 3:12-13). Perhaps, on the contrary, their sudden shame was a reproach not on themselves, but on their Creator who had overlooked their (lately discovered) need for a publicly presentable outfit. Perhaps it was all part of the package the serpent had sold them—the "listen to a voice other than God's" package—the "decide for yourselves what is good and what is evil" package—the same package out of which we are still taking things, new and old, and insinuating them into the Word of God as we know it.

God's question in Genesis 3:11 is like the question I wanted the Blanks to consider: "Where are you getting this from?" Who gave you the distorted, tinted, clouded lens through which you are reading Scripture? From where did this filter come, through which you are straining the Word of God? Who told you that with these lenses and filters on, from whomever and wherever they may have come, you were still gazing upon the naked text? Who told you that with this veil of Moses over your eyes, or in this dark mirror, you would see God and His things clearly? Who led you to believe that this was Scripture Alone?

Dear Father in heaven, bring Your powerful Spirit to bear on our shuttered and bolted minds, so that Your Word might break through. Loosen the roots of our transitory feelings and experiences, our pet ideas, the thoughts and reasonings of men, and especially the suggestions of the evil one, so that the Word of Your Son, Christ Jesus, may be planted in their place, take root, and bear fruit abundantly. In His name, Amen.
Posted by RobbieFish at 9:15 AM