Today's Adventures in a Winter Wonderland

I got up early yesterday morning to see whether the predicted foot or so of snow had indeed blanketed the world, or at least my little corner of it. I saw a dusting on the ground and little to no snow actually falling. I checked the forecast and it persisted in predicting a winter disaster. After continuing to get ready to drive 50+ miles to my home church, I looked out again and the snow was pelting down, at least an inch having accumulated in under half an hour. I conferred with my pastor, and by the time he decided to cancel services for that morning, several inches lay outside and more was still falling. 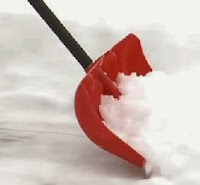 It fell until sometime in the late afternoon or early evening. Then the temperatures did likewise. I woke up this morning to an email from my supervisor at work, advising me to shuffle my work plans for the week and stay home for today. A special Epiphany service planned for this evening also went under the snow plow. Suddenly I had nothing to do with my day except post a piece of business-related mail, wait for mail delivery, and try to make sure my car was free of snow and ready to roll for tomorrow.

FIT THE FIRST. 6:00 a.m.
For my first adventure, I went out to ask the guys running snowblowers around the apartment complex whether they might kindly blow my car free of the huge pile of snow blocking it in from behind. They said no, but mentioned that a truck was expected at any time to plow everyone clear.

FIT THE SECOND. 6:30 a.m.
I went out again to ask the guys shoveling the front stoops whether they would either shovel behind my car or let me borrow a shovel. No on both counts. They also predicted the arrival of a truck to clear the lot. At this writing, no such truck has materialized.

FIT THE THIRD. 9-ish a.m.
After hours of listening to the sound of snowblowers blowing and shovels shoveling, I went out and found everything looking about the same as at 6:30, only with more daylight on it and no maintenance guys in sight. I meant to walk the four blocks to the post office to buy postage for an outgoiing piece of mail, but I was also thinking about stopping by the apartment complex's management office to request help getting my car dug out. Instead, I got side-tracked by a neighbor whose car was stuck in the middle of the street. I tried to help him and a security officer push it free. We gave up when the officer decided to call maintenance, and I went home without passing the post office, because my cold-weather gear was soaked in ice-cold water.

FIT THE FOURTH, 10-ish a.m.
Wearing a different coat (one whose collar flipped up to cover most of my face), a different pair of shoes, a different pair of gloves, and two (2) winter hats, I went out again to visit the post office. Along the way I stopped at the management office and asked them to put in a maintenance request to plow my car clear. Request submitted, I went home again without going to the post office, because the wind was blowing straight through my hats, coat & gloves as though they weren't there. I didn't think I would survive the walk to the post office and back!

FIT THE FIFTH, sometime around noon
I finally made it to the post office, wearing two pairs of gloves, a scarf, both hats, and my best coat. I had to carry my glasses in my pocket because they frosted over.

FIT THE SIXTH, between noon and 1 p.m.
After getting unbundled at home, I bundled up again (only with a different scarf) and went by maintenance in person to ask for a the loan of a shovel. One of the guys let me borrow an orange plastic hand-plow for a while. I worked up a good sweat before maintenance guy came along and demanded his shovel back. In a few minutes I had almost finished clearing out the 2 cubic meters (+/-) of snow behind my car that, in some 19 hours since it stopped falling, still hadn't been touched by snow removal equipment, other than one pass with a plow a good car's length from the rear bumper. I still couldn't get at my car from either side without getting wet up to my knees, and the pile of snow in front of it (thanks to this morning's snow blowers) is as high as I can step over. But there was progress, at least.

Before going back inside, I went back to maintenance and asked them nicely to please finish up around my car (and the lot in general) so that I can go to work tomorrow. They looked like they had the manpower and equipment to have cleared every walkway and street in the complex several times over by now, but they mostly seemed to be taking an inventory of their shovels or a head-count of their personnel while the snow-blowers idled loudly, exactly where they had been idling when I borrowed the shovel.

I now have two hats, two scarves, and four gloves laid out to dry in front of a heating vent; two pairs of soaking wet socks on the laundry pile; and 2 pairs of shoes that will probably smell like salt-cured, washed-rind, stinky feet cheese for the rest of their service life. AND... if I pull my car out of its space, I will never again find a place to park in this neighborhood until the snow melts of itself. So I'm in no rush to give it a spin before tomorrow morning. I just hope it doesn't get plowed in again.
Posted by RobbieFish at 1:45 PM