The Last of the Mohicans

The Last of the Mohicans: A Narrative of 1757
by James Fenimore Cooper
Recommended Ages: 12+ 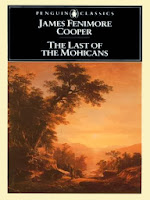 Forget about the 1992 movie starring Daniel Day-Lewis, and based on this book published in 1826. All these years later, I still remember a lot of things about that movie. Very few of them faithfully represent things in this book. It turns out to be not so much a film adaptation of the novel, as a piece of original entertainment based on characters and situations in the novel. Oh, well. I still like the 2002 film The Count of Monte Cristo, even though I now know it resembles its source book even less. It's a trial to be both a bookworm and a movie buff. You really have to grow up a lot, and accept that the two art forms work in different ways and can never, even at their very best, reflect each other very accurately. Don't let the fact that this book doesn't resemble that terrific movie stop you from reading it, however. Particularly now that there are audio-book editions, such as the 1989 recording by Larry McKeever that entertained me during a week's worth of business miles, one can painlessly enjoy this historical romance, in spite of its old-fashioned language and the sometimes ridiculously flowery diction of its speaking characters.

Whether one can do so guiltlessly, with its perhaps embarrassing racial and sexual stereotypes, is entirely up to you. As a rule, I would suggest reading it anyway, and thinking for yourself, and letting the voice of an earlier period of cultural history speak for itself. I don't think we do ourselves or our culture a service by censoring the past, or by consigning our own society's arts and letters to the damnation of memory. Speaking of which, a living example of what we mean by the phrase "damnation of memory" is depicted in this book, along with several other American Indian customs that Cooper, at a time when the native races of North America seemed destined for extinction, felt it was his mission to preserve for posterity. These rich details fire the imagination, while the tragic romance of the last noble warrior of dying tribe, and of a British gentlewoman taken captive by his most savage enemy, pull at the heart-strings. These ingredients add up to a masterpiece of American literature that has inspired and influenced creative minds around the world.

It is, in fact, acknowledged as the masterpiece of its maker. James F. Cooper (1789-1851), while popular in his time, is today remembered mostly for this one book. Nevertheless, it is worth knowing that it is the second book in a series of five, known as the Leatherstocking Tales. Leatherstocking is one of several nicknames of the character known in this book as Hawkeye, the Scout, the Long Rifle, and La Longue Carabine. His real name, barely mentioned in this book, is Natty Bumppo; so it's no wonder that he goes by a variety of other names. Hawkeye is a white man who has lived among Indians all his life and adopted many of their ways, with certain refinements such as his trusty rifle, affectionately known as Killdeer. His most trusted companions are Chingachgook and his son Uncas, the last surviving chiefs of the fictitious Mohican tribe, which Cooper based on a combination of two or three tribes, some of whom survive to this day.

This trio of hunters, scouts, and warriors, come to the aid of an old Scottish general and a young British major, who have survived a horrible massacre by Indians allied with the French forces in the pre-American-Revolution conflict now known as the French and Indian War. Together with a silly, psalm-singing music teacher named David Gamut, they fly from one ambush, battle, or ordeal to another while trying to recover the general's two beautiful daughters, who have been taken captive by the Lenape tribe, and by one particular villain named Magua. Apart from this, you don't need to know anything in preparation for reading this book, other than to expect an almost unceasing series of exciting battles, suspenseful standoffs, daring ruses, dangerous rescues, and desperate negotiations. It all comes to a terrific climax in which Cooper does something even better than the expected "kill all the bad guys and leave all the good guys alive and well for the next installment." It's a fascinating document of how Native American culture was understood by Anglo-Americans, a captivating romance that will leave you longing for a (mostly) lost way of life in the once wild woods of long-ago New York, and a piece of literary entertainment that easily stands up alongside such classics as Walter Scott's Ivanhoe and Dumas's The Three Musketeers.

Although it is neither the first book in the Leatherstocking series in publication or in canon order, this is probably the best place to start reading Cooper's work. If it really hooks you, you'll be interested to know the titles of the other books in the series: The Pioneers, The Prairie, The Pathfinder, and The Deerslayer. Here is a more complete list of Cooper's books. His novels and non-fiction works of naval adventure also come highly recommended; that may be the first area I explore after this.
Posted by RobbieFish at 4:16 PM