We continue our ongoing study of the hymns in Evangelical Lutheran Worship (ELW) that are tacky in the context of Lutheran congregational hymnody... 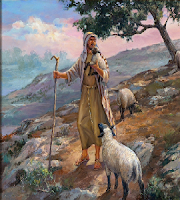 780 "Shepherd me, O God" is an example of the latest fashion in psalmody, combining a free-verse paraphrase of a psalm, set in multiple stanzas to a rhythmically flexible tune, with an easy-to-learn refrain. Typically, the refrain is a sort of antiphon, except that it recurs more often within the psalm than was formerly the custom; and it is sung by "All" while the verses may be sung by a choir, a soloist, or other select forces. In this setting by Marty Haugen, the book designates "Leader or All" as the singers of the verses, though the congregation's chances of getting through it without mishap are reduced by such complications as two verses (4 and 5) that are set to unique strains of music; two verses (2 and 3) that have small ossia notes where a different number of syllables (vs. verse 1) implies a different turn of melody; and three different endings for the refrain (mostly in the form of how long you're supposed to hold the last note), depending on which stanza comes next. In other words, this piece is likely to be a confusing train wreck, possibly reducing parishioners to helpless tears, unless it is left (in most cases) in the capable hands of professionals. So I ask you: Why is it in the pew book?

781 "Children of the heavenly Father" is a nice, warm, cozy, Swedish hymn by Carolina Sandell-Berg (1832-1903), whom I have often name-dropped as "the Fanny Crosby of Sweden." Apart from anything else, this hymn stands out as one of the relatively few non-Hispanic examples in ELW of a hymn that can be sung in the original language as well as English. I just think it's interesting that only the first of this hymn's four stanzas is presented here in Swedish, given the cultural background of the churches most likely to be using this book. It's as though token gestures of pride in their outreach to other cultures (however empty and self-serving they may be) are more important than preserving and celebrating their continuity with the culture they came from. For what it's worth.

In a previous installment of this thread, I didn't feel mean enough to pick on Horatio Spafford's (1828-88) "It is well with my soul" (first line: "When peace like a river attendeth my way"), hymn 785 in ELW. I guess I've gotten meaner since then; and I refuse to be swayed by the sob-story of how, when, and why Spafford wrote it. The echo-y, part-song-y refrain—"It is well (It is well) with my soul (with my soul), it is well, it is well with my soul"—is enough to place this hymn well above the high-water mark of tackiness that is suitable for Lutheran worship. If your congregation can actually sing it in parts (which is doubtful, given our culture's late decline in musical skill and education), you might as well admit before doing so that it is aiming to become an old-timey Methodist church rather than a reflection of historic Lutheran ways and convictions. Does the text say anything wrong? No. But what it does say, it says with trembly, throbbing sentimentality that is guaranteed to raise the spiritual humidity of your meetin'-house to the dew point.

792 "When memory fades" is, all kidding aside, a hymn about dementia and elder-care by Mary Louise Bringle (b. 1953). What I really want to sneer at, however, is her (or the hymnal committee's) choice of tune, FINNLANDIA by Jean Sibelius, adapted from a theme in the orchestral tone-poem of the same name. As a fan of Sibelius' music, I am vexed that this, the tackiest of all the pieces he ever wrote, is the one best known to most people, including those who only know one piece by Sibelius. And I especially object to this tune, as one who holds that baptizing themes from secular, classical music, and converting them into hymn tunes, is harmful both to the music and to hymnody. This halting, hestitating, maddeningly-slow-to-get-to-the-point melody is perhaps one of the most egregious examples on which I could rest my case. I hated it when The Lutheran Hymnal (TLH) paired it with "Be still my soul," and I hate it with this hymn. Whatever the text's merits or faults may be, it does not deserve to be pegged to a piece of sentimental, nationalistic propaganda, even if it is Finnish.

Then I would note that this hymn text, authored by a Presbyterian college professor and adult Sunday School instructor, has some goofy touches. Stanza 1 asks God to "speak to our souls..., speak to our hearts" without bothering to suggest by what means (if any) this is to be done; and to "empower us... by your grace infused," which some may regard as confusingly technical. And as stanza 3 contemplates the close of life, far from throwing the sinner at the mercy of the God who judges and justifies, it says: "No valued deed will ever be undone," and: "Your mind enfolds all finite acts and offerings." Which, begging your pardon, I take to mean something like, "They will be saved by the righteousness of their works." Really? In a Lutheran hymnal?

794 "Calm to the waves" is another hymn by Bringle, this time set to the contemporary tune CALM SEAS by Thomas Pavlechko (b. 1962). It is such a short text—one very brief stanza—that a quote of any length risks copying the whole thing. Suffice it to say, the hymn alludes to Jesus calming the storm, applies this to calming one's personal anxieties, and concludes: "In stillness, hear his voice." See? That description is actually longer than the hymn itself. So it suffers from the whole Taizé problem, frequently discussed in this thread, of being so short that the only way to make it effective as a hymn is to repeat it ad nauseam. Then there's the ambiguity of that final line. In stillness hear His voice, eh? How?

797 "Blessed be the name" (Heri ni jina) is credited as an "East African traditional" hymn, "as taught by Deogratias Mahamba." The only further information I have been able to gather about this hymn, or Mahamba, is that the original language of the text is Swahili. Both stanzas are here given in both Swahili and English, though ELW does not bother to identify the language by name, caring more for its triumphalistic token of multiculturalism than for any real and meaningful respect toward the specific culture it is taken from. Perhaps some of this disrespect is also implied by the very decision to transcribe a piece of oral tradition; but that's an open question, and I can see points for both sides of it. There is, finally, the question of how useful it will really be to have this song in the pew hymnal of an anglophone American church, where learning two stanzas of a hymn in Swahili is bound to take a lot of work, especially when performing it in a strongly ethnic style of part-singing. Finally, there is actually a solo or descant part written into the vocal score, where some individual or group is supposed to sing "Amini!" or "Believe!" in a way that overlaps with the phrases sung by the congregation. Verdict: impractical, if not impracticable. 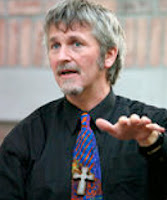 798 "Will you come and follow me" (a.k.a. "The Summons") comes from John Bell (b. 1949) and the Iona Community (see also ELW 721 and 741). It is set to the Scottish folk tune KELVINGROVE, which sounds like it would play well on the bagpipes. The first four of the five stanzas are enclosed in quotation marks, indicating that we are singing something that God is supposedly saying to us. Evidently, all He has to say is, "Will you do this?" or "Will you do that for Me?" The stanzas all end in some variant of "Will you let me ____ in you and you in me?"—which is sometimes biblically sound, such as when the bit in the blank is more or less "live." But when, for example, verse 2 puts "answer prayer" in the blank, the result is a bit weird. Lyrics that require as much thought as that line does, to properly appreciate what it's saying, should not be sung to an up-tempo, skirling tune, in my opinion. The endings of stanzas 3 and 4 are even weirder. This isn't the only part of the lyrics that fall into a repeated pattern. The first long phrase of each stanza ends with "if I but call your name" (or something close to it), the second with "and never be the same," etc. But other than the sometimes awkward theological mad-libs that result from this pattern, my main quibble with this hymn is the hectoring tone that it puts in God's mouth (or rather, in ours, as we pretend to be God speaking to ourselves), and the dubious specifics of what God seems to be demanding of us. "Will you kiss the leper clean...?" (stanza 3). "Will you love the you you hide...? Will you quell the fear inside...?" (stanza 4). "Will you use the faith you've found to reshape the world around...?" Excuse me? Will the real God please stand up? Because I'm not sure where or from whom all these demands are coming from. And stanza 5 is our response, in which we pledge to respond to His summons and follow him, etc. Which suggests that all that has gone before has been an expanded paraphrase of Jesus saying, "Whoever would come after Me must take up his cross and follow Me." Whether the above verses are really a faithful paraphrase of His summons is at least open to question. And I am seriously questioning, at the very least, the bit about "loving the you you hide."

800 "Spirit of God, descend upon my heart" is set to Frederick Atkinson's (1841-97) tune MORECAMBE, than which a more flaccid, limp, and powerless specimen of hymnal melody can scarcely be imagined. The text is by George Croly (1780-1860), an Irish Protestant clergyman, novelist, playwright, critic, and commentator on Scripture, whose best-known hymn this is. I like the quote that Wiki ascribes to him: "Christianity is a manly religion, addressed to manly understandings, and which ought to be preached in a manly language." How a text by the author of that sentiment could get mixed up with MORECAMBE is a truly astounding mystery. After once having heard this hymn paired with that tune, it is difficult to shake from it the impression of syrupiness. But in all fairness to the text as such, it's a pretty strong representative of the "Commitment, Discipleship" topic, introduced as far back as Hymn 796. Croly says some remarkably good things in this hymn, though if it could be improved at all, it might be by focusing more on what Christ has done and will do, for us and in us, rather than on what (albeit with His help) we want to do for Him.
Posted by RobbieFish at 11:35 AM