My cat Tyrone and I have a little game. Whenever I open the front or back door of the apartment, he tries to shoot past me and get out in the hallway. My job is to play defense, either with my legs or with anything I might be carrying with me, to block him.

He isn't really trying to escape. Most of the time he stops just a couple of feet past the door and looks up at me, as if to say "Gotcha!" Or he rolls on his back on the carpet, as if laughing. Now and then, either to score extra points or just to rub my nose in his victory, he runs up the stairs to the next landing and rolls on the neighbor's welcome mat. He is very docile when picked up and carried back inside the apartment, 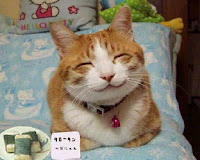 even allowing me to manhandle him down the stairs without struggling, biting, or scratching. It's kind of fun... unless I'm in a real hurry.

Last week there was a day when Tyrone played this little game and scored one point (stopping in the front hallway). While I was gathering him up to put him back in the apartment, disaster struck. My other cat Sinead, usually too nervous about strange new things (such as the whole world outside our apartment) to play Tyrone's game, chose this moment to sneak out the door--for maybe the third time ever.

This was not good. Sinead does NOT like to be chased, or grabbed, or carried. She is a past master of eluding capture and, failing that, fighting to the last tooth and/or claw to escape again. I knew that if she ran up the stairs, I was apt to have a bad day before 6:00 in the morning.

Luckily, I had a book in my hand. I nearly always do, you know. I can hardly bring myself to leave the apartment without one, for fear that boredom will overtake me while waiting for food to be served, or my car's oil to be changed, or the doctor to see me, or the movie to start, etc. So what did I do? I threw the book at Sinead.

To be more precise, I threw the book over Sinead's head. The tip of her tail brushed it before it slammed into the next stair riser above and behind where she had paused to look at whoever might have called her name just then. The impact panicked her, and she bolted--straight through the door into the apartment.

The door I had left open for just this chance.

The door through which Tyrone then spotted a second opportunity to score points in his game. And this time, he went for the extra point...

Whew. After running up the stairs and carrying my well-fed cat back down, I was a bit puffed. Plus, you have to admit that your day is off to an amazing start when three out of two cats make a run for it before you leave for work...
Posted by RobbieFish at 11:19 AM