LAWYER: Timmy, do you consider yourself a kind, gentle person?

WITNESS: I guess so. 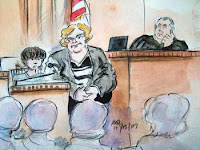 LAWYER: Would you say you are honest most of the time?

LAWYER: It's just like you to say so, isn't it Timmy?

LAWYER: Isn't it true that you are, in fact, a lying, cheating, reckless meanie?

LAWYER: And I would add, you are an expert at covering it up with a veneer of false modesty!

WITNESS: I don't even know what that means!

LAWYER: If it please the court, I would like to have the following statement read into evidence. "I, Mike Sneekwyler, did on the 19th of last April hear Timmy Cook make the following oral statement under oath: 'Eeny, Meeny, Miney, Mo; catch a tiger by the toe; if he hollers, let him go; my mother says the very best tiger is you or me, and you are not it.'" Do you deny making this declaration?

LAYWER: Did you, or didn't you, declare the same intending it to be taken as your word of honor? 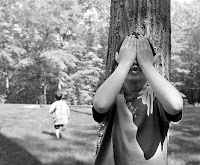 LAWYER: Then I submit that you, Timmy, have demonstrated a history inhuman cruelty, gross irresponsibility, perjury, and fraud!

LAWYER: Do you deny that you said, "Catch a tiger by the toe?"

LAWYER: Then what kind of monster are you? Who would do such a thing to a helpless animal, one of God's creatures? Who would even consider it, much less flippantly discuss it?

WITNESS: But that's not the...

LAWYER: And when you added, "If he hollers, let him go," were you not referring to said tiger?

WITNESS: No. I mean yes.

LAWYER: Which is it, Timmy? Can't you even keep your story straight? Did you mean the tiger or not?

LAWYER: But wouldn't it be foolish to unleash a roaring tiger after performing acts of hideous cruelty on it? Have you no regard for public safety? 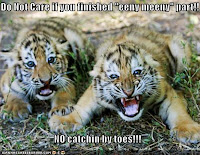 LAWYER: And did your mother actually say you were the very best tiger?

LAWYER: Your honor, may I also introduce the following affadavit from Mrs. Cook, Timmy's mother? "I have not made, nor will I ever make a statement to the effect that my son Timmy is a predatory animal." Well, what do you have to say about that, Timmy? Weren't you advised a few minutes ago that perjury is a crime?

LAWYER: The witness is unresponsive, your honor.

JUDGE: Timmy, you will answer the gentleman's question, or I will hold you in contempt of court.

WITNESS: I don't understand any of this!

LAWYER: I'll rephrase the question. Timmy, were you aware when you attributed the words "My son is the very best tiger" to your mother, that you were making a false statement?

WITNESS: I want to go home! 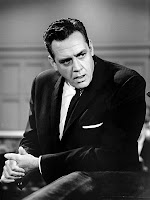 LAWYER: And isn't it true, Timmy, that the phraseology "you or me, and you are not it" is merely a snotty, falsely modest way of rubbing your opponent's nose in your arrogant claim to be the very best tiger?

LAWYER: You talk of fairness, Timmy. Oh, that's rich! Where was the fairness when you left out the second "Eeny, meeny, miney, mo"?

LAWYER: But you yourself stipulated the accuracy of Mr. Sneekwyler's deposition. And when you went directly from "If he hollers let him go" to "My mother says," you left out a crucial phrase, the repeat of the nonsense words that make all that ritualistic mumbo-jumbo legally binding. In other words, you attempted to defraud Mr. Sneekwyler...

WITNESS: No! No! You're twisting everything around!

LAWYER: Your honor, I move to have this witness's entire testimony struck from the record, on the basis of unreliability.

WITNESS: But I'm the only one who saw the robbers after they took their...

LAWYER: Not another word! How can we be sure what you saw, if in fact you saw anything? You have practically confessed to being a dishonest, brutish little hellion! Your honor?

JUDGE: Motion granted. The witness will step down...
Posted by RobbieFish at 8:47 PM