This past week was another biggie for the St. Louis Symphony Chorus. With the SLSO and conductor David Robertson, we performed the 21st century answer to Handel's Messiah, a nativity oratorio titled El Niño. American composer John Adams, who is still living, wrote it in 2000.

El Niño is a huge piece, full of technical and artistic challenges for the players and singers, but we did quite well under Robertson's assured leadership. Enhancing the experience were the St. Louis Children's Choirs (singing only in the last number of the work), soprano Jessica Rivera, mezzo Kelley O'Connor, New Zealand-born baritone Jonathan Lemalu, and countertenors Steven Rickards, Daniel Bubeck, and Brian Cummings.

For general info about the piece, see this Wiki page. That's where to look to find out who wrote the lyrics we sang, etc. In this space, I only want to record a few impressions that I received from the various movements.

First, in "I sing of a maiden" (No. 1), the chorus sings the text of a medieval Christmas carol meditating on the mystery of Mary being both maiden (virgin) and mother. It's a peculiar setting, in which the singers repeat fragments of the text in varying order, sometimes breaking it down to a single syllable repeated over and over. Robertson told the chorus he thought of it as dream music, in which you catch bits and pieces and only slowly seem to get the gist of what you're hearing. The music holds echoes of Bach's Brandenburg Concertos, tinselly glimmers, and the quiet purr of a well-oiled motor.

The countertenor trio (a.k.a. "male ensemble") makes its first statement in "Hail Mary, gracious." It is also the first sign that, in his writing for three countertenors (basically, male altos), John Adams has hit on a very special thing. This moves on to a long, contemplative Mezzo aria titled "La Anunciación," whose opening evoked images in my mind of a woman gazing out at a landscape during a calm, starry night. The chorus explodes back into action in No. 4, "For with God nothing shall be impossible," a phrase from the angel's message to Mary that we repeat over a dozen times in six-part chords with the men lagging behind the women by half a beat. A quiet chiming interrupts this thrilling message in mid-sentence, signaling the moment of the miracle of conception.

One of my favorite numbers was No. 5, "The Babe leaped in her womb," the biblical account of Mary's visitation to Elizabeth, performed mostly by the male ensemble (again, with some of Adams' best vocal writing) and with only a bit of amplification by the chorus. I love the way Adams paints light, timelessness, and feelings, using three falsetto voices moving homophonically. He alternates between perfect intervals and vibrant dissonances, combining melody inspired by medieval modes with quirky rhythms and unusual instrumental colors, such as the almglocken (a set of pitched cowbells).

No. 6 is the Magnificat (Mary's song from Luke 1), sung by the Soprano with only a bit of support by the women of the chorus. In his very personal way, I think John Adams has written a very beautiful setting of this text; it is another favorite movement of mine. The libretto turns to apocryphal gospels for No. 7, "Now she was sixteen years old," in which the male ensemble, soprano, and baritone soloists dramatize Joseph's discovery that Mary is pregnant. Joseph continually asks questions like, "Who is he who has deceived me?" all the way to the end, seemingly ignoring Mary's insistence that "I do not know a man," so as to set up the next movement, "Joseph's Dream," where one of Luther's sermons is quoted.

Adams takes on Handel's Messiah in No. 9, "Shake the heavens," based on the same biblical text as Handel's number "Thus saith the Lord." The orchestra plays pounding chords; the baritone bellows, often in long strings of notes that imitate the shaking of earth and sea; and the chorus pops up for only two phrases, though among the loudest in the whole piece: "I will fill this house with glory, and in this place I will give peace." After this shattering climax, calm descends and the male ensemble, soprano, and mezzo finish the number with a haunting setting of an apocryphal story about Joseph and Mary traveling to Bethlehem. This might actually be the most breathtaking moment in the entire oratorio. 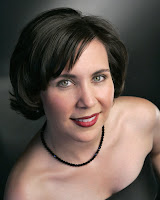 Part I concludes with No. 11, "The Christmas Star," which is as close to a "Grand Finale" as any part of El Niño gets. This allegorical poem, translated from Spanish, casts Mary's ordeal of motherhood as the story of a little girl catching a falling star and being burned to dust by it, in the meantime igniting the whole world. It's a weird but thought-provoking poem, and a spectacular piece of music calling upon all the soloists and the chorus, and incorporating Hildegard von Bingen's Latin hymn O quam preciosa est virginitas virginis huius. If I were to point out the parts of this movement that I particularly loved, not many bars would be left unmentioned. But I seriously envy the sections of the choir who got to sing the chantlike beginning of Hildegard's song. By a clever musical illusion, Adams contrives to make this chant sound like it floats timelessly in the background, unconnected to what the other parts are singing, yet somehow fitting perfectly into the whole. It's a very moving ending for the first half of the piece.

Part II has fewer highlights for me, but was much more work for the chorus. No. 12, "Pues mi Dios ha nacido a penar," involved the mezzo and the chorus in a gentle yet rhythmically tricky lullaby to the infant Jesus. Then Adams retells the Epiphany story, beginning with "When Herod heard," a scene for the countertenor trio and the baritone soloist, in which Herod connives to murder the infant Christ. This is immediately followed by the chorus singing, "Woe unto them that call evil good," a devilishly tricky number that quotes some of Isaiah's most impressive words in the King James Version:

"Woe unto them that call evil good and good evil, that put darkness for light and light for darkness, that put bitter for sweet and sweet for bitter; woe unto them that are wise in their own eyes, and prudent in their own sight; who seek deep to hide their counsel from the Lord, and their works are in the dark. I also will choose their delusions, and will bring their fears upon them."

Then the male ensemble resumes the Epiphany story with "And the star went before them" and "The three kings," in the latter of which each of the countertenors impersonates one of the traditional wise men. Oddly, Caspar, Melchior, and Baltasar derive no deeper insight from their encounter with the Lord than, "God exists!" I find the text at this point underwhelming. But the embarrassment is quickly swept aside by the delicacy of the nearly unaccompanied chorus, "And when they were departed," in which Joseph is warned in a dream to take Mary and the baby Jesus and flee with them into Egypt. I see that the next number is titled "Dawn Air," which I'm sorry to say, triggers no recollections whatsoever. Whatever it was, it was soon drowned by the Herod's scream of fury, in the chorus "And he slew all the children."

Adams then contemporizes the biblical slaughter of the innocents by analogy to a 1968 massacre of students in the main square of Mexico City, in a soprano aria with chorus in Spanish titled "Memorial de Tlatelolco." Villainy like Herod's is certainly not the sole property of the ancient world; nor is pain like that of the parents of the children Herod put to the sword. Much of what the chorus sings consists of the words "I remember. We remember." Again in the person of the prophet Isaiah, the chorus retaliates with their final full number, "In the day of the great slaughter," in which God promises to "bind up the breach of His own people" and "heal the stroke of their wound." In spite of these words being encouraging, the music has a rhythmic intensity that bespeaks anger - the anger of a just God who will one day avenge all the injustice that now seems to run freely in the world.

My section of the chorus, at least, sat through the last three numbers of El Niño. In "Pues está tritando," the soloists and the top three sections of the chorus seem to argue amongst themselves about the role each of the four elements (earth, air, fire, water) played in the nativity of Jesus. Then apocryphal stories about Jesus' infancy occupy the soloists for the last two numbers, "Jesus and the Dragons" and "The Palm Tree," the latter of which involves the children's chorus and a speaking part for the baritone soloist. One could regard the entirety of the last three movements as a gradual dying away from the final climax of "In the day of the great slaughter." At the very end, having persevered through a stormy passage that completely drowned them out, the children are singing very softly to the accompaniment of a single guitar, which finally trails off in mid-phrase to conclude the piece. Such a low-key ending seems to be typical of Adams.

In all, I was impressed by the expressiveness, originality, and energy of Adams' music, particularly when the countertenors were singing. I must confess there were passages in which I almost had to pinch myself to stay awake. And there were a couple of movements whose rhythmic complexity came close to defeating us poor amateur choristers. I was never fully confident of my part in the final chorus, for example. It's a big hunk to chew, but it may be the hunk from the early 21st century that amateur and professional choruses are still cutting their teeth on in 20, 50, or even 100 years.

As a theologian I could wish for a more biblically orthodox text, but that's more than one can expect from a composer of a New England Unitarian background whose credits also include The Dharma at Big Sur and On the Transmigration of Souls (the latter of which, by the way, the SLSO & Chorus performed during my first year with the outfit). Bottom line, the piece makes a good mental imagery generator, it has some gorgeous passages, it could give any musical organization a worthwhile technical challenge, and I'm not surprised to hear that many in the audience were emotionally moved by it. I myself felt tears in my eyes during at least one passage.

IMAGES: Adams; O'Connor; Rivera; Lumalu; the three countertenors (from a different performance of the same piece, of which they constitute the "original and traveling cast").
Posted by RobbieFish at 10:29 PM