I was too exhausted last week to do much of a review of Bernard Labadie's week(end) with the St. Louis Symphony. And after Sunday evening's party at a chorus member's house, where several other members of the chorus expressed opinions widely different from my own, I wasn't sure what I should say.

I sat in on the first half of the concert at the Friday evening performance. The first number was a group of dance pieces from the opera Dardanus by the French Baroque composer Jean-Philippe Rameau. I have to admit that I hadn't heard much, if anything, by Rameau before. Neither had most members of the orchestra, according to a bassoonist I chatted with backstage. Symphony orchestras typically specialize in, well, symphonies, and orchestral music from the eras in which the symphony held currency. In other words, they do a lot of Classical-period (Haydn and Mozart type stuff) and later music, and only a very little music by earlier composers such as Bach and Vivaldi. And for them to perform music from a French Baroque opera is especially rare.

So it was a rare treat to hear the Rameau, give or take Labadie's somewhat longwinded introduction to the music. He explained how ballet was an indispensible part of French opera (even Wagner's Tannhaeuser didn't play in Paris until the composer added a ballet, the now-famous Bacchanale), and how some operas contained as much as an hour's worth of dance music. It takes all kinds, I guess. Rameau's music was attractive, witty, and even at times exciting, marked by "special effects" such as a bass drum imitating thunder. Though it was quite different from any other Baroque music I have heard, I would venture to say that anyone who can't get enough Vivaldi should look into Rameau. In spite of differences between their styles, these two composers seem (to my unaccustomed ear, at least) to work on the same level of musical craftmanship.

Labadie next conducted one of Haydn's "Paris" symphonies, No. 83, nicknamed "the Hen." I am always a sucker for Haydn, and this symphony has some distinctive charms. Oddly, I didn't think the orchestra sounded as well-prepared for this piece as for the Rameau, though I would be surprised if they hadn't played this piece before. As for why the Parisians dubbed the work "La Poule," I can only guess that they thought the second theme of the first movement had a "clucking" sound.

After the intermission, the chorus came on stage for our part. Once again, the Symphony showed off its new projection screen, showing the lyrics and their translation over the chorus's heads while we sang Faure's Pavane and Requiem. One of the ladies in the chorus commented, backstage, that she didn't understand why people thought of the Pavane as a melancholy piece, given that the text is so "funny." It certainly is an odd little poem in which groups of men and women tease each other. As my female colleague put it, "The men are groping all over these women, and the women are rolling their eyes and muttering to each other about how awful the men are." 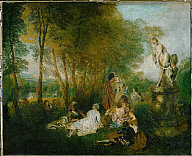 Frankly, I'm not so impressed with the Pavane now that I know what it's about. At one time I thought it was one of the classiest tunes on classical radio: butter-won't-melt-in-your-mouth gentility combined with a sense of wistful leave-taking. Having done the choral version with the lyrics Faure added (after originally writing the piece for instruments only), I now hear it differently. I can't help being repulsed by the cold-blooded artfulness of this music - mind you, I said "artful," not "artistic" - as it glides suavely and languidly along, belying the triviality and undignified motives of its characters. It conjures a picture in the imagination: a picture of a bunch of self-absorbed aristocrats flirting with each other at some picnic in what they suppose to be a bucolic setting, but which is actually a manicured park or private garden. If I were one of the liveried servants pretending to be invisible in the background, overhearing this banter, I would probably spend my next day-off reading Das Kapital and planning murder.

The Faure Requiem is a sweet piece of musical consolation. Unlike most other settings of the Mass for the Dead, this one has no Dies irae and very little room for the wrath of God. It is all rays of light and spun-sugar angels, twinkling stars and, now and then, an anxious sigh. There are a few bits where it very solemnly asks for mercy and peace, but most of the piece is suffused with a kind of innocent, gentle joy. I remember Amy Kaiser saying, a couple years ago while were rehearsing Mozart's Requiem, why it is that, even given the flaws in Franz Suessmayr's completion of this tragically unfinished masterpiece, the Mozart is the piece people most often turn to for comfort. "The Verdi is too big, operatic, and frankly, expensive," she explained, "and the Faure is too sugary." Well, this is true, but it is still one of the "big three," and is likely to remain so, because of its unforgettable melodic beauty and soft, pillowy comfort, condensed into such a concise form that it tries no one's patience and even, I think, leaves one wishing it had gone on longer.

As for how we did it, under Maestro Labadie's baton - well, there is a matter of some controversy. The local reviewer trashed us, as usual. But orchestra insiders who heard the concert said it was exquisite. And in spite the first night or two of rehearsal, when Labadie stunned the chorus with numerous and sweeping changes in every detail of our performance (from Latin diction to phrasing and dynamics), I thought we adapted to his wishes with admirable professionalism and succeeded in giving him the distinct sound that he sought. I even gave the Maestro positive marks on the guest-conductor evaluation sheet everyone does backstage.

But as I mentioned before, at the party after Sunday's matinee I discussed the week's work with several more experienced chorus members, and found a considerable range of opinion, most of it unhappy. Some regarded Labadie as brusque and tactless. Others sought to assign blame for the lack of communication that resulted in all our preparation going by the board on Tuesday of performance week. And still others were simply sick of being asked to produce a sound so uncomfortably alien to the nature of this ensemble - a sound in which women are meant to sound like boys, and in which one or two brief passages of full-throated singing hardly compensated for endless pages of crooning in a tiny, anemic half-head-voice.

The Faure Requiem is finally, simply, no piece for an oratorio society of some 130 singers. Its pleasures and merits are better appreciated by a smaller and less operatically-inclined group. But I think it is to our credit, and the credit of both Amy Kaiser and Bernard Labadie, that we carried it off and, against our own inclinations, made the sound the piece called for. And nuts to the critic in the Press-Dispatch, she of the perennially poisoned pen. Everyone knows she hates that which she reviews. She couldn't be so quick to find fault otherwise.
Posted by RobbieFish at 7:09 AM