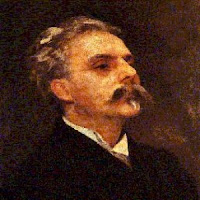 This whole week has been rehearsals, and now (starting tonight) performances, for the St. Louis Symphony Chorus & orchestra. It's the chorus's first gig of the season. We're doing Gabriel Faure's Pavane and Requiem in the bottom half of a program that also includes a ballet suite by Rameau and a symphony by Haydn. I plan on hanging out in the hall during the first half to hear the Rameau & Haydn pieces, since the chorus isn't onstage at that point.

Guest-conducting is Canadian maestro Bernard Labadie (below, right), who speaks American with only the slightest accent, and who has remarkably clear ideas as to what sound he wants to get and how to get it. At first this resulted in a frisson of horror running through the chorus, as we realized that all our notes from Amy Kaiser were going out the window. But Labadie won us over, partly by making funny observations. For example, on Tuesday night (the piano rehearsal with conductor and chorus) he claimed that the news was just in that the tenor melody in the Requiem's "Agnus Dei" movement "has been voted by the angels to be the most beautiful melody in heaven." On Wednesday, with the orchestra present, he carried the angel imagery - very apt, for the Faure piece - a mite further when informing the sopranos, during a rehearsal of the "In Paradisum" movement: "There are two extremely well-documented facts about angels in the Bible: they have no sex, and they have no vibrato!"

Thursday night was our second and last rehearsal with the chorus, soloists, and orchestra all together. It was an "open rehearsal," so we had an audience of donors and friends of the symphony. I believe they got a good show. Things were coming together quite well. We only had to stop or go back and make a few adjustments. We flipped the program around so that the chorus could leave at the break, so I didn't get to hear the Rameau & Haydn pieces, but that's all right. The only ongoing challenge for the chorus seems to be keeping our minds on the text (and giving it a crisp, bright, forward focus). For the orchestra, the bugbear is balancing the organ with everybody else. The soloists are lovely - the soprano is great with child, and that's one child who is getting the full benefit of angelic-sounding music as it dreams its littlest-angel dreams!
Posted by RobbieFish at 6:49 AM

I sang in Faure's Requiem in college and liked it a lot.