Observations during a 2-day trip to St. Louis 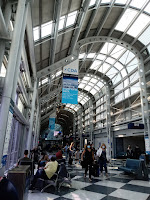 Last week, I flew to St. Louis on Tuesday and flew back to Minnesota on Wednesday, by way of Chicago in both directions. It was such a crazy, exhausting couple of days that I'm still recovering from them – a process not helped by the ultimate outcome of the meeting that was the reason for it all. Please accept that as my partial excuse for not blogging much lately. (Photo: A scene from O'Hare Airport, shot on my phone.)

I was applying to be reinstated to the clergy roster of the Lutheran Church – Missouri Synod for the second time (previous attempt, 2017) after a somewhat histrionic resignation under protest in, I believe, 2012. I won't go into the details other than to say that I went to bat for another pastor, got fed up with my district's ecclesiastical leadership and spent a while in another church body before realizing (after moving into the hinterlands) that I needed to be served by a faithful Lutheran pastor more than I needed to stand on my dignity. So I joined an LCMS congregation in 2014 and by 2017, I was thinking that the pastors in my congregation's circuit needed a hand or two to help them out, so I offered myself as a well qualified candidate. At that time, in 2017, I got a "no thanks" from the Synod, and as it I learned at the end of last week, I got the same answer on this occasion. So let's leave that topic lie for now, eh?

During my trip, I collected some travel-related impressions that I thought would make an entertaining installment on this blog. So, here goes.

1. My GPS-guided navigation app's performance, during the part of my trip closest to home, left me in serious doubt about its algorithm for finding me the quickest route. I know, from continual (like, weekly) trips between where I live and where my parents live 45 minutes or so to the south, the fastest and most direct route from here to U.S. Hwy. 10, which forms the main artery for the first part of my trip to the Minneapolis-St. Paul airport. But Waze kept trying to talk me into taking a completely unnecessary detour and insisted, and I mean insisted, that I turn at every single highway that I passed on the straight shot to U.S. 10 – many of its suggested turns taking me in the opposite direction from where I was trying to go. It also kept updating my ETA in real time. But only when I passed the point of no return, as far as all alternate routes to U.S. 10 being exhausted, did it finally calculate the route I was on ... and instantly knocked 10 minutes off my ETA. With guidance like that at the start of my trip, I wasn't left feeling very confident in the route Waze would set for me at the other end.

2. It's tough to find a place to grab breakfast in Greater Minnesota when you're on the highway at 4 a.m. It wasn't until around 5 when I finally saw a Holiday station that was open so I could buy an egg sandwich and a cup of coffee.

3. It's tough to find an open parking space in the multi-story parking structure at the airport at 7:40 a.m. when your bladder hasn't been emptied since 4.

4. It's discouraging to learn, upon landing in your destination city, that the meeting that was supposed to be at the Marriott (back when you reserved a room there so you'd be able to stay in the same hotel), is now happening at the Hilton. However, mentioning this issue to the staff at the Marriott's check-in desk might get you a gift certificate for a free app and soft drink at the hotel bar. In my case, I ordered a plate of toasted raviolis (which the guy next to me saw and said, "I think that's what I want now") and, to wash it down, the best bacon cheeseburger I've had in years. It also led me to install the Uber app on my phone and experience my first two Uber rides, to and from the Hilton. It was almost close enough that I would have walked it had the neighborhood been more hospitable to foot traffic. But I got the Uber and only worried a tiny bit because the driver on the way to the meeting got stuck in traffic and ended up cutting my arrival pretty close.

5. Uber drivers navigate with a cell phone app that looks like Waze but isn't. My driver on the way back to the Marriott said it's a proprietary app for Uber drivers and isn't as good as Waze. They have my deepest sympathy. (For what it's worth, I also remember both of my drivers' names – Wayne and Siddig – so say hi to them for me if you meet them.)

6. Marriott hotel rooms' TVs now display a QRC code on their screens which, if you scan them with your cell phone, turns your phone into a remote control. I found this cool but useless, since I didn't actually want to watch TV.

7. Marriott hotel rooms can be fffffreezing. Between that, thinking about the meeting I'd just had, thinking about an issue that had come up at work (I knew about it via email) and just generally being keyed up in anticipation of the next day's travel, I pretty much didn't get any sleep.

8. Also, it's possible for your flight to be delayed the night before it takes place. This happened to me in St. Louis. I got a text informing me that my flight crew for the St. Louis-to-Chicago leg of the next day's travel had gotten in late and, per federal regulations, wouldn't be allowed to depart again before they'd had so many hours of rest. So, my flight's new time of depature was set for an hour later than previously scheduled ... making its arrival in Chicago several minutes later than my connecting flight's departure. I had to plan a new itinerary right there in my freezing hotel room. And get up at 4-something a.m. the next morning for an even earlier flight out.

9. Drivers of hotel shuttles to the airport might be a bit overworked. The guy who drove my group of departing guests to the airport on Wednesday morning actually fell down while helping someone get off the shuttle. He was an older guy who, I believe, had some problems with his sense of balance, which is concerning. But he also mentioned that he'd been on duty six days in a row and after working the morning shift, his "day off" meant he had to be at work again for the next day's night shift.

10. During any given round trip with stops at Chicago O'Hare, you will have to run-walk from one end of the airport to the other in under 20 minutes. Perhaps fortunately, that happened during my return trip. The plane from St. Louis, via United, arrived at Gate F something. The plane to Minneapolis, also via United, departed from Gate C something. I pretty much had to run the full length of the E and F concourse, then over a skyway to the B concourse, then from some way up the B concourse down into a tunnel to the C concourse, and then all the way to the end of the C concourse. I definitely got my cardio in. By comparison, the flights themselves were comparatively sedate and relaxing.

11. I hardly talked to any of the other passengers, except a couple (in an airport concourse) who were traveling to Vienna and a family (on the hotel shuttle) heading to Florida. People around me on the plane were all plugged into their own private worlds via screens and earbuds, so there was none of that chit-chat you used to have with complete strangers whom you would never, ever see again. Actually, I didn't mind that much. I read a book on the plane. In fact, I finished one book on the outgoing leg of my trip and had to buy another at the airport gift shop on Wednesday morning. I did, however, eavesdrop on a conversation between a group of bright-eyed young people who seemed to be flying together from Chicago to St. Louis, and who all (from what I could gather) worked as office cleaners. It struck me as really interesting, perhaps a symptom of what's going on in the nation's economy these days, that a company could actually afford to fly a whole crew of office cleaners between Chicago and St. Louis.

12. These days at airports and on airplanes, you spend a lot of time listening to threatening messages about the federal mask mandate and all the penalties for non-compliance. It was actually a pleasant break to hear the O'Hare public address system haranguing travelers about watching their children on and around elevators and escalators.

13. Airport parking at MSP costs about $38 for an approximately 27-hour stay. Also, getting out of the parking area and funneled back into city traffic is a perilous proceeding, with other drivers not particularly obliging to those of us who had to cross all the lanes in a short interval to get to where we wanted to go.

14. Just when you think you're going to go insane if you have to drive one more mile through road work, the construction zone ends ... and while you're still enjoying that sigh of relief, another construction zone begins.

15. Given multiple routes it could steer you back to U.S. 10 from Interstate 94, Waze will choose the one that has more road construction going on.

16. The definition of Motley, Minnesota is "the town along your route across Greater Minnesota that you always think of as being 'almost there,' but that always turns out to be a surprisingly long drive from there." I actually recorded that definition on my phone's voice recorder as it came to me, although I was really experiencing it the other way around – sure that the next town ahead was going to be Motley, I realized that it wasn't – several times. It was much, much farther along than I had thought, remembered or hoped, as it always is; and by the time I actually reached it, I was physically and mentally demolished and very ready for the obligatory stop at Dairy Queen. Oy, what a trip.

17. Luckily, my parents were only a handful of towns farther along from Motley. And though that was only 45 minutes short of all-the-way-home, it was a nice place to stop, decompress and have dinner at someone else's expense. God bless my parents!

I know, a list of 17 things doesn't seem right. But the reality of a two-day trip from northwestern Minnesota to St. Louis and back is going to be full of Top 10 lists that go on way longer than they should and/or Top 20 lists that peter out at 17. Or both. And now that I know the ultimate result, I can honestly say that I got exactly one unambiguously good thing out of the trip: that bacon cheeseburger at the Marriott hotel bar.
Posted by RobbieFish at 3:30 PM