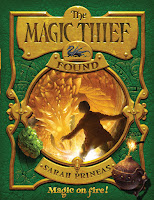 "Once a thief, always a thief" may be true, but since he picked a wizard's pocket in the mean streets of Wellmet, Connwaer has become so much more than that: not just a wizard, but maybe the wizard who can talk to the magic that keeps the city alive. And the city needs him more than ever, with a predatory magic headed its way, spreading dread and darkness. If only Conn had a locus magicalicus – a stone that connects a wizard to the magic – but he still hasn't found one to replace the one he sacrificed to save the city two books ago. With a sentence of death hanging over his head and ditto headed toward Wellmet, Conn sets out on a quest for a new locus stone. Along the way, he makes discoveries that will shake up the beliefs of the wizarding establishment back home, even more than his already disputed claim that the city's magic is a living being.

As perilous as his journey to collect that stone may be, he faces danger even more dire on his return. Like, for starters, a hanging scaffold. The magisters, the duchess and her guard won't give him any credit for already saving the city twice, and for personally saving the guard captain's life at great risk to his own. They're firm in their belief that he's just a liar, a thief, and a rascal whose pyrotechnic stunts have endangered the city. If only they knew that the city's survival now depends on setting off the biggest blast yet – and that he must live but only, perhaps, to sacrifice himself.

Is that spoiling too much? I don't know. Just try to wrap your head around the fact that, in the middle of this book, the hero finds himself standing on a wooden box with a noose around his neck, only moments away from having the box jerked out from under him, while no one will listen to his claim that the city is about to be attacked. And then, with inspired timing, the attack arrives and the danger becomes so, so much worse. You don't expect cutely illustrated children's books to hit you with the force this one does, with still ongoing and ever expanding feats of world building, growing suspense, creeping horror, bureaucratic frustration, high-flying excitement and moving acts of love. And since the cover art gives it away, I don't feel it counts as a spoiler if I add that it has dragons. What are you doing, sitting there? Go out and get this book!

This is the third book in the "Magic Thief" series of which, after I read the first book, I immediately rushed back to the bookstore and bought books 2 and 3. Prineas works in juvenile fiction spanning the science fiction and fantasy genres, including other titles I'd be interested in reading. Book 4 of this series is titled Home.
Posted by RobbieFish at 9:29 PM