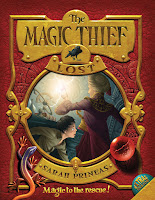 In The Magic Thief, we met Connwaer: a sometime pickpocket and wizard's apprentice from the Twilight side of the river in Wellmet, where the magic that keeps the city alive was almost stolen by a pair of villains for reasons unknown. Those reasons become known in his second adventure, when the fact Conn just saved the city hasn't brought him any credit with the ruling duchess, her guard or the magisterium, or wizard council. No one trusts him or wants to believe that the city's magic is a living being and that he can kind of communicate with it – especially since he lost his locus magicalus, the stone that made that communication possible. Now the only way he can talk to the magic is by setting off explosions, and each of his feats of pyrotechnics goes more out of control until he finds himself banished from the city.

Banished is all right for now, because the magic seems to want Conn to join an expedition to the desert city of Desh, whose sorcerer-king is suspected of sending shadow creatures to Wellmet whose touch turns people to stone. While his best friend, the duchess's daughter Rowan, tries to negotiate with King Jaggus, Conn puts his thief skills to good use, sneaking into the sorcerer-king's quarters in search of evidence. The danger proves to be even greater than Conn imagined, however. There is something hinky going on, but the magic of Desh is also a victim here, and the real power behind the shadows, and the predator cats that surround Jaggus, and the power drain that threatens the survival of Wellmet, is something Conn is only beginning to understand – and something the other wizards back home will hardly believe at all.

Conn's journey to Desh and beyond, and (gulp) maybe back again, bring a chilling new dimension to a magical world that was fascinating to start with. It broadens the landscape from the streets of one city, divided between the privileged Sunrise side of the river and the ghettoish Twilight, to include a vast country dotted with duchies, each with its own source of magic. In addition to a deadly conflict, it also features a terrible temptation that appeals to Conn's sense of being alone in the world with everybody against him. And it charts the further growth of a character who quickly rose from the gutter to become perhaps the most important wizard in his world. Other characters, lovable and otherwise, grow as well in this book, from the elder wizard Nevery who (with a little reluctance) is willing to change his way of thinking to the gruff Benet, a stereotyped thug of few words who becomes one of the people Conn cares most deeply about, and that care is reciprocated. It introduces new characters who will become still more important in books to come. And it leaves Conn on the cusp of another adventure even more urgent and epic than this.

This is the second book in the "Magic Thief" series by an author whose young adult novels include fairy tale adaptations, a fantasy in which books come to life and a science fiction series featuring a shape shifter from outer space.
Posted by RobbieFish at 9:25 PM