The Case of the Missing Marquess

The Case of the Missing Marquess
by Nancy Springer
Recommended Ages: 12+

You probably don't know this, but besides his older brother Mycroft, Sherlock Holmes also had a younger sister named Enola – her name an anagram for "alone" – who, in the four years since her father died, hasn't seen hide nor hair of her much older siblings. Her mum has raised her to be an unconventional female for her time (1888), like herself – a bit of a bohemian artist, a bit of a suffragette (what they called feminists before women could legally vote), a religious non-conformist, a general non-wearer of corsets. Then, on Enola's 14th birthday, her mum walks out of the house and is never seen again. After a couple of days, Enola gets worried enough to call in the police and her two brothers.

Sherlock looks down on Enola with crushing arrogance, assuming she is intellectually inferior because (in the first place) she's a female and (with equal emphasis) she has a petite head. Mycroft, legally the head of the family, is horrified to discover that all the money he's been sending their mother to employ gardeners, tutors, stable boys and seamstresses, hasn't been spent on anything like that. The grounds of Ferndell Hall have grown wild; the closest thing they have to a carriage is Enola's bicycle; she runs around in bloomers and boys' shirts, reading stuff by Aristotle and Thackeray and (gulp) Mary Wollstonecraft out of the home library. She's basically Flavia de Luce, only without the chemistry lab or the habit of stumbling over a dead body at every turning.

So, off the brothers fly, almost as soon as they've landed, leaving Enola to be fitted for her first corset and the equally suffocating confines of a young ladies' boarding school. Naturally, the moment the opportunity presents, she runs for it – operating on the principle that the best plan is no plan, because that way no one will anticipate her moves and head her off. Concealing in her false bosom and bustle the wads of cash that her mother left hidden around the house for her, Enola bikes, hikes and hitches a train toward London, hoping to hide under her brothers' noses while trying to find her mum. But along the way, she stumbles into a mystery involving another missing youngster – a 12-year-old viscount or marquess (or both) named Tewksbury Basilwether, who (Enola deduces) has run away for the sea after having a bit too much of being babied by his mother. Unfortunately, while she's involving herself in this affair, she lets her disguise as a genteel widow be seen through. Even more unfortunately, she gets caught up in a kidnap-for-ransom caper involving some very bad people and, if you'll excuse the spoiler, Tewky.

After that, it's all about getting away from the villains, making sure they're caught and, trickiest of all bringing Tewky to safety without being nabbed by her brilliant detective brother. If she can manage it, perhaps Sherlock will deduce that his small-headed sister is well on her way to being his intellectual equal – if not his equal in other ways.

Women not being equal to men is a problem at the heart of this book, and presumably the series of which it is the opening salvo. Enola and her mother each, to some degree, fight it by walking the narrow line between anachronism and the radical edge of upper-class femaleness in 1888 England. For the education of readers who never lived in such an age, she helpfully narrates it in a way that draws attention to the manners, dress, social pitfalls and (especially in the London scenes) moral and mortal perils that folks of that time wouldn't have needed to explain. Her excuse is the discomfort that all these inequalities give her, and through her, us. But the most uncomfortable bit, for Enola – even heartbreaking, perhaps – is her growing suspicion that her mother isn't missing because something happened against her will.

Here's the part of my review where I'm obliged to say what I think about this book. But first I have to say, please don't think that I'm saying this because I hold any counterrevolutionary opinions about the liberation of women and whatnot. In terms of being fun to read, top marks. But I've said this before about certain books that renovated well established literary worlds created by other authors: I do not, on principle, approve of one author commandeering and repurposing the creations of another. Frank Beddor did this with L. Frank Baum's Oz; Gregory Maguire did it with Lewis Carroll's Wonderland; and now Nancy Springer is doing it with Conan Doyle's Holmes.

To be honest, I notice (when I gaze into myself) that such creative recycling doesn't annoy me so much when the original author is unknown, as in the case of re-imaginings of Arthur and Robin Hood, fairy tales and myths. Or maybe what makes the difference for me is that the authors of those books (such as Mary Stewart, T.A. Barron, Guy Gavriel Kay, Howard Pyle, T.H. White, Roger Lancelyn Green, Gerald Morris, Robin McKinley, Jane Yolen, Sam Llewellyn and more) either take pains to conceal the source of their borrowing or apply their touch-up brush with decency, fairness and respect. Beddor's and Maguire's approach, in my opinion, is hostile to and destructive of the material it takes from; it slanders and defames it, or possibly rapes and murders it. It's too late for me to warn Springer about this pitfall, since she's already done whatever she was going to do with this series (written more than a decade ago), and she's done more of the same to Arthur and Hood as well. But if I could speak backward in time to this talented author, I'd ask her to bear in mind that Sherlock Holmes is not her creation (and nor is Mycroft) and that she'd better not take a dump on beloved and even revered characters who originated from someone else's imagination. Not if she wants me to stick with her. And if that's not the sort of thing she cares about (even via time-travel telepathy), maybe she should be concerned about this: Someone else may, someday, hijack a product of her literary ingenuity and alter it out of recognition to her work, and she won't be able to stop it. 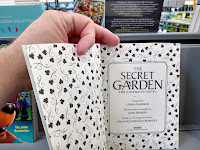 I'm not saying that's where this series goes, but after one book I see the danger inherent in the exercise and I'm almost afraid to read further. For the same reason this photo, which I shot recently at a Walmart in Yankton, S.D., makes me angry – as do similar movie studio cashing-in-on-merchandising-rights novelizations of films that were themselves based on novels, such as ones I've seen based around Planet of the Apes and The Tale of Desperaux – I feel it like a knife in my guts when I see an author lose control of their work to the extent that somebody else rewrites it into something else, and the world goes on undisturbed. Somebody should fight it and if nobody else will, I will.

End of rant. Not a bad book. Actually pretty fun to read, as I said. But I'm watching you, Springer.

This is the first installment of the Enola Holmes mysteries, which is apparently going to become a film (or possibly series of films). The titles of its five sequels all start with "The Case of the" and conclude, respectively, with Left-Handed Lady, Bizarre Bouquets, Peculiar Pink Fan, Cryptic Crinoline and Gypsy Goodbye. Besides these books, Nancy Springer has written more than 50 novels in a career reaching back to the late 1970s, including the five-book "Book of the Isle" series, the "Sea King" quartet," two "Tale of Camelot" books (I am Mordred, I am Morgan le Fay), five Rowan Hood books (Outlaw Girl of Sherwood Forest, etc.), and such standalone or loosely grouped titles as The Hex Witch of Seldom, They're All Named Wildfire, Damnbanna, Needy Creek, The Most Mauve There Is, The Boy Who Plaited Manes, Drawn into Darkness and The Oddling Prince, as well as many short stories. She won two Edgar Awards in the 1990s, for the young adult novel Toughing It and in the juvenile category for Looking for Jamie Bridger.
Posted by RobbieFish at 10:44 PM