(500) May God bestow on us His grace is a "missions" hymn by Martin Luther (1524), set to its own 1525 chorale, ES WOLL UNS GOTT. If your congregation doesn't know this hymn, work on that. It's beautiful. For many years, I've fantasized about Martin Luther riding his cart to Worms, expecting to probably be burned at the stake like Savonarola, strumming on his lute and singing a hymn like this in his fine tenor voice. But of course, Worms was three years before this hymn. Oh, well, we can dream, right? 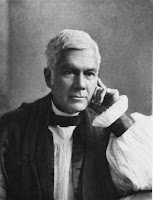 (501) Soldiers of the Cross, arise is a "missions" hymn by William Walsham How (1854) couched in terms of military aggression. Shades of "go therefore and shove the gospel down all nations' throats, by whatever force necessary."

(502) Saints of God, the dawn is brightening is a "missions" hymn by Mary Maxwell (1849), a.k.a. "the lady from Virginia." I think the intentions of her use of the word "Pentecostal" in stanza 2 may be innocent, but due to 20th century developments this line may have poor connotations within the Lutheran context.

(503) Rise, crowned with light, imperial Salem, rise is an impressive poem by Alexander Pope (1712, cento, alt.) But it's set to the abbreviated form of OLD 124TH, about which I've complained before. Also, stanza 3 calls upon the congregation to sing "prostrate" and not "prostate," which might be a difficult decision to make on sight at any but a very stately tempo. (See also hymn 339, "All hail the power of Jesus' name.")

(504) O Spirit of the living God is a very fine "missions" hymn by James Montgomery (1823), a prolific hymn writer, poet, sometime editor of a politically radical newspaper and member of the Moravian sect, which I am inclined to forgive him because of the high quality (along with quantity) of his hymns. TLH contains 14 of them. This particular one seems, to me, to be an under-utilized member of the "missions" section. At the risk of overdoing the "hey, this missions hymn is great" bit, I'm going to quit doing that and move directly to...

(511) Jesus shall reign where'er the sun, a somewhat tacky "missions" hymn by Isaac Watts (1719, cento) that is often cited as an example of British imperialism clothed in Christian language. Not for nothing was the British Empire called that on which the sun never set. Whether or not the hymn can be read without interpreting it that way is one question; whether its quality is so excellent that we must overlook its role in history is another.

(512) Art thou weary, art thou troubled is a nice little hymn by John Mason Neale (1862, cento, alt.) that opens the "Cross and Comfort" section. I'd like to mention it, first of all, as an example of excellence in little things, and second, because some of the antiquated language might be a bit of an obstacle today. How many people reaching stanza 4 will recall ever having encountered the word "guerdon" before? (It rhymes with "burden" and means "reward.") 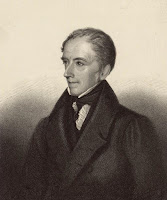 (516) In the hour of trial, another hymn by Montgomery, is a hymn that I often used for personal comfort when I was a deeply unhappy teen. In retrospect, I probably could have chosen better; but it is what it is. It's a soft, gentle hymn of self-consolation, addressed to Jesus, and all that it lacks to be really excellent is an explicit appeal to the efficacy of word and sacrament. Also, the tune ST. MARY MAGDALENE by John B. Dykes (1862) is nice, in a bland, mildly sentimental way, probably contributing greatly to this hymn's overall association in my mind with a sepia-tone photograph. I'll always feel affection toward this hymn, but I'll say of myself what I've said of others: there's no accounting for taste.

(518) If thou but suffer God to guide thee is by George Neumark (1640), set to his own tune, WER NUR DEN LIEBEN GOTT. It's a striking piece, but really what makes me mention it here is its use in the film Babette's Feast, where it is sung by an archpietist sect in Denmark, with the raised 7th degree of the minor scale (in TLH, the F-sharp of G minor) flattened to the equivalent of the medieval Aeolian mode. It really puts a striking twist into a familiar tune.

However, for (528) If God Himself be for me, also by Gerhardt (1656), I would recommend the tune named after it, IST GOTT FUER MICH (Augsburg, 1609), which is paired with it in LBW, LW, ELHy, ELW and LSB, rather than TLH's choice of the hackneyed VALET WILL ICH DIR GEBEN. Both are fine tunes, make no mistake; but IST GOTT has a confidence, strength and seriousness that I think fit the subject matter better than VALET's overexposed cheerfulness.

Another hymn that I wince to admit I loved when I was a depressed kid is (531) Come, ye disconsolate – a poem co-authored piecemeal by Thomas Moore (1816) and Thomas Hastings (1832) set to the gushy tune ALMA REDEMPTORIS MATER by Samuel Webbe (1792). In its sympathetic touchy-feeliness, it perhaps serves best as an example of why the church should consider having one hymn-book for home devotions and another for public worship; I would relegate this to the former.

(533) Nearer, my God, to Thee is that hymn, inescapable as an iceberg in the North Atlantic night, that (legend has it) the ship's band played on deck while the RMS Titanic was going down. The Handbook to the Lutheran Hymnal, after going through multiple variants of this hymn by different authors, who vied with each other to correct the shortcomings of Sarah Flower Adams' original (1841) poem, comes just short of admitting that including it in TLH was a regrettable decision. For example, Adams (even "alt.") never mentions Christ. One of the authors of unsuccessful rewrites was no less a Lutheran leader than Henry Eyster Jacobs. The original and final hymn is such a piece of vague, sentimental religiosity, I'm kind of surprised it made it past the editors of TLH and in my opinion, it's a black mark against their good judgment.

I'll leave off for today where "Cross and Comfort" ends, with the "Times and Seasons" section on deck (hymns 536 ff.).
Posted by RobbieFish at 8:45 AM