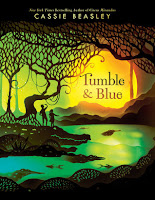 Blue Montgomery is a kid who always loses, no matter what the competition is. His dad Alan, a car racer who always wins, may not have the right perspective where it comes to raising Blue. For example, his advice to stand up to a bully results in the boy having a cast on his arm. But what really hurts Blue is when his dad drops him off at Grandma Eve's house in the off-the-map town of Murky Branch, Georgia, and drives away in the middle of the night. Blue doesn't want to accept that he's going to be living there for the foreseeable future. He argues with the kudzu-strangled population sign when it magically updates to include him. He starts training to see how fast he can run the two miles of dirt road from the town to the highway. And he tries not to get too comfortable in Grandma Eve's house - though that's not likely to be a problem, with a sudden flood of houseguests pushing Blue up to an attic filled with boxes of trophies won by the luckier half of the Montgomery clan.

You see, the Montgomerys have a thing about fate. According to family lore, a Montgomery appealed to a golden alligator named Munch 200 years ago in the heart of Okefenokee Swamp. As a result, half of the family has gifts, like the toddler who sings country music and Cousin Howard, who can eat all he wants without putting on weight. Then there are the ones like Blue, who have to live with a bad fate - such as Cousin Ida, who lives in fear of her twin sister's pet gerbils because she knows all animals hate her; another relative who is always starting fires; one who is constantly getting into car accidents; and, well, Blue. Every Montgomery knows that one person in the family has a chance, once every 100 years, on the night of an impossible red moon, to visit Munch and ask for a different fate. And now, with a red moon apparently coming up, every Montgomery wants Ma Myrtle (Eve's mother) to choose which of them will get that chance.

Blue has been trying every way he knows to change his luck, but everything he tries just gets him hurt. His friend Lily Wilson, who lives next door, calls herself Tumble and wants to be a hero, like her role model, Maximal Star; but every time she tries to save somebody, she ends up needing to be saved. One night, the two of them seize an opportunity to steal a march on the Montgomerys and follow the path of the red moon, where their friendship and their worthiness for a better fate will be tested.

This is a truly weird and wonderful book. I'm not really much into the idea of fate ruling over people's lives - but neither are the main characters, to tell the truth. Still, with that concept lying under it, this book stands up as a work of great originality, full of emotionally powerful moments and surprising imagery. It faces family relationships, friendship, grief, guilt, fear, greed, hopeless romance, self-sacrifice, and acceptance of the not-so-lucky things in one's life with courage and compassion. And crawling right through it is a chilling reptile whose cold-blooded comments add just the right tingle of creepiness, keeping the sentimental side of the story under control. I'm interested in what else author Cassie Beasley has to offer. For now, there's just her debut novel, titled Circus Mirandus.
Posted by RobbieFish at 2:34 PM