Parable of the Hazard Signs, Etc.

To what shall I compare this generation, which demands that ministers of religion teach the faith without comparing it to, or condemning, false doctrine? 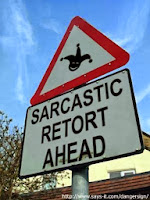 It is like a state that voted to remove all hazard signs from its highways. This way people wouldn't be frightened or offended by approaching hazards, such as sharp curves, steep grades, falling rocks, slippery bridges, animals crossing the road, and approaching cross-traffic. Removing the signs does not remove the danger in these things. In fact, it makes the danger greater.

It is like a ruler who instructed his officials to strip containers of hazardous chemicals of their warning labels, because these warnings cause needless fear and worry. Removing the warning label does not make the chemical less poisonous or explosive or flammable or corrosive. Nor does it lower the chances of an accident.

It is like a kingdom whose posted laws never tell you what not to do, but only what is permitted. Crime is still punishable, but you have to figure out for yourself how to avoid committing it.

It is like a navy that issued sea charts to its officers, omitting the precise positions of dangerous rocks, reefs, and shoals. After all, why put pressure on people to be accurate? That just hurts their morale!

It is like a police force that stopped publishing wanted posters, giving the description of wanted criminals and the crimes they were suspected of. After all, why encourage people to be suspicious of their neighbors? That's bad for the community!