A Prayer for the Ship
by Douglas Reeman
Recommended Ages: 14+

Written in 1958, a decade before he started the Bolitho series under the pseudonym Alexander Kent, this book was Douglas Reeman's first novel. It is based on the author's personal experiences as an officer in Britain's Light Coastal Forces during World War II. And I think it's a good place to start experiencing the wide variety of naval fiction by this very prolific and popular writer who, more than 50 years later, is still working as I write this.

The opening of this book finds Sub-Lieutenant Clive Royce, sort of a naval reserve officer, as he joins his first ship: MTB 1991. The MTB stands for Motor Torpedo Boat, part of a group of zippy little "tanks on water" which, together with Motor Gun Boats (MGB), cruise the North Sea off the Eastern Coast of England. World War II is on, and German vessels on and under the water are a menace to Allied shipping. The Light Coastal Forces are a key part of Britain's nighttime defense of its shores and harbors. Plus, they often provide an armed escort for supply ships and troop convoys; and, when there's nothing else to do, they patrol the Netherlands and Belgian coast in hopes of catching the other side's E-boats and armored trawlers.

Compared to the age of sail, battles in the modern age of rockets, ordnance, and motorized craft is a swift and inhumanly brutal business. Within minutes of sighting an enemy ship, an MTB's crew could be cut to ribbons by flying bullets and shrapnel, or blown sky-high by a shrewdly aimed torpedo. The boats are fast, communication (by radio) is still faster, but death can come even more swiftly when ammunition penetrates solid steel,

whereas there isn't more than a few planks of wood between a petrol-powered engine and a storm of fiery death.

So, Clive learns to keep his eyes well peeled through the long, cold, dark nights. And he rises fast, through the death of one commanding officer in MTB 1991 and his own nearly crippling injury while seconding another. Soon he commands an even larger and more powerful boat and is forced to take even more responsibility, but when nothing is less certain than whether one will live to see Christmas, falling in love may be the most dangerous maneuver he has to make.

I learned a lot while reading this book. I had to, obviously, since I had never before read a book based on 20th century naval warfare. I spent the first third of it, give or take, poking around Wikipedia and other websites for photos and descriptions of types of weapons and ships named in the book, as well as some naval slang I had never heard of. If you have no idea what an Oerlikon is, or a "Hostilities Only" rating, or an A.F.O., this book may be your opportunity to immerse yourself for a little while in a remarkable era gone by--one that wasn't, after all, so long ago.

After reading several other books by Reeman, I have begun to sense that this book is representative of his style in many respects, even though he covers diverse maritime subjects ranging from pre-Napoleonic ships of war to modern battleships with diesel engines, machine guns, and radios. For one thing, he has a strong inclination toward romance, frequently weaving into his adventure a love story (whether it ends happily or not), which may help his books attract more female readers than other authors in the genre. For another example, Reeman's books reveal a recurring type of psychological conflict within the main character,

simultaneously serving his country with honor and courage while also loathing and dreading the carnage and wastefulness of warfare. Even in his more historically oriented fiction, the inner voice of Reeman's heroes reflects a present-day sort of humanity, making the heroics of previous generations all the more impressive.

For another early Reeman novel based on his own WWII naval experience, look for High Water (1959). I certainly will. For a list of Douglas Reeman titles in publication order, with cover images and plot summaries, see this page of the author's website. A quick scan of these summaries indicates that, while the greater number of Reeman's non-"Alexander Kent" novels are set during World War II, he covers a whole range of action from 1850, in the early days of the steam era, to as recently as 1970. You can take the sails out of the wind but, apparently, you can't take the wind out of the sails of this fine author, or of the Royal Navy and Marines whose bravery he honors.

This book is the first of five books in the "Royal Marines Saga," a.k.a. the "Blackwood Novels," by a still-active master of naval fiction whose career has spanned over 50 years. I understand that the novels depict succeeding generations of a family whose men were officers in Britain's "sea soldier" service. If you've been reading the type of naval fiction I have (the Hornblower, Aubrey, and Ramage series,

all set between about 1770 and 1820) you'll already be familiar with this red-coated band whose quarters, even on board ship, are called "barracks," who live separate lives from the sailors, and whose officers have a separate chain of command from that of the Navy.

These are the bluff figures who, most of the time, seem to be on board mainly for ceremonial purposes, a little sentry duty, and firing muskets out of the main top. Now and then they distinguish themselves in an on-shore expedition, where they are really in their element, or when battle spills over the sides of the ship and onto the enemy's decks. But when the story is mostly about the captain of the ship, how he handles his vessel and commands the men under him, you can sometimes pass several chapters together (if not a whole book) without even noticing the Marines are there. This series is different, and it begins with a young Marine Captain named Philip Blackwood, around 1850.

Blackwood is a third-generation Marine officer, following the footsteps of his father and grandfather in the tradition of a family that had previously been noted for its army service. When we meet him, he already has a good deal of field experience, including a terrible battle with the Maori of New Zealand in which too many comrades, including his commanding officer, were killed--thanks, in part, to the recklessness of one Admiral Sir James Ashley-Chute. Now Blackwood finds himself, once again, serving on Ashley-Chute's flagship, this time in command of the ship's Marines, as well as his own half-brother, Second Lieutenant Harry Blackwood. 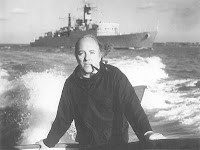 The date is in the 1850s, sometime after the fall of Napoleon. A new power is rising—steam power. On land, at least in England, one can travel by train instead of horse and carriage. By sea, paddle-wheels and (later) underwater screws provide the power to maneuver quickly, regardless of the wind. Being a new technology, steam isn't accepted by everyone. One of the last to recognize its potential is Ashley-Chute, while Blackwood himself longs for a change from the slow-paced world of ships under sail. Steam power has its weaknesses. It requires a constantly replenished supply of coal. It produces scandalous amounts of soot and dust, to say nothing of the oven-like heat of the engine room. It breaks down at the drop of a hat, and even when it's working (at least in the paddle-boat stage) it makes for a sickening ride over the tops of the heaving seas, whereas wind power pushes a ship straight through them.

But speed is on their side when Blackwood commands a Marine force in a mission to rescue the survivors of an African trade outpost who have been besieged by black natives and Portuguese slave-traders, who have their own sinister interests to protect. Blackwood takes his first serious injury here, even while leading his pitifully outnumbered Marines to victory. Returning to duty as quickly as he can, he is soon put in even greater peril. First he must rescue the woman he loves from the hands of brutal slavers; then, without a moment to rest, he must snatch victory from the jaws of defeat in a battle botched by a cowardly superior officer who, naturally, takes all the credit while Blackwood slowly recovers from an even worse injury. 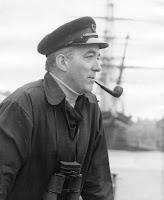 But that's only the appetizer for a dramatic adventure that combines the anguish of hopeless love, anxiety over his father's illness, his stepmother's infidelity, and his brother's sexcapades (adult content advisory!!), before rising to a climax in the trenches of the Crimean War. Which, I bet you didn't know (unless you're British), was a war between Russia and Turkey over part of what is now Ukraine, in which the British fought on the Turkish side. Whether you've heard of it or not—I mean, really! Florcence Nightingale? Charge of the Light Brigade? Balaclava? Sebastopol??—you'll find it offers amazing opportunities for a Marine officer, from a nearly disastrous naval engagement in the Black Sea port of Varna to a (then) new type of battleground where troops dig in, instead of marching towards the other side, and lob artillery shells at each other.

It's about the world of warfare in the midst of turblent changes, driven by technological improvements such as rifled gun-barrels, grenades, and ships that could switch from wind power to steam in the time it takes to read this paragraph. The conditions that made World War I the bloodbath that it was, were already starting to take shape. At the same time, the role of the Royal Marines was changing, even as Philip Blackwood's place in the service and in the civilian world was changing. All this makes this book a fascinating snapshot of a dynamic moment in military history, as well as an appropriate launch-slip for a series celebrating the original Marine Corps and its ever-evolving way of life.
Posted by RobbieFish at 11:05 AM